Our OneCOP, Who Art in Athens, Hallowed Be Thy Jail 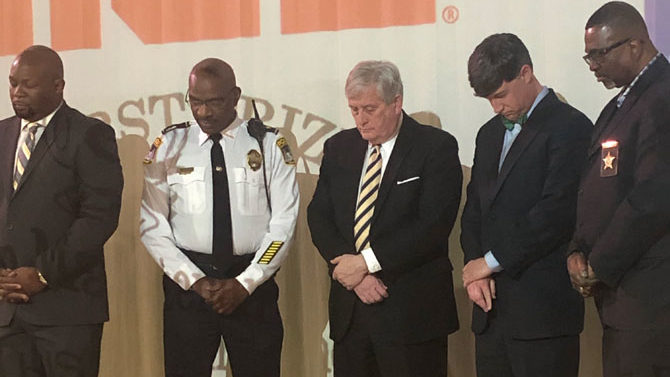 OneCOP, a partnership between faith institutions and law enforcement, is led by the Rev. Markel Hutchins of Atlanta. Some may be familiar with Hutchins from his “advocacy” for the family of Kathryn Johnston, a 92-year-old grandmother who was killed by police during an illegal raid on her Atlanta home in 2006. Hutchins claimed to have helped Johnston’s family win their wrongful death settlement and proceeded to sue the family for 10%, according to the Atlanta Journal-Constitution. Then, In 2010, amidst a power struggle between opposing factions of the Southern Christian Leadership Conference, Hutchins, who claimed to be the interim SCLC president, allegedly had the power cut off, welded the backdoor shut and padlocked the gates. When questioned in court, Hutchins invoked his Fifth Amendment right to avoid incriminating himself.

This is the same man who is now in Athens mobilizing faith leaders to work in partnership with law enforcement. The OneCOP promotional narrative is textbook propaganda, defined in Merriam-Webster’s dictionary as “ideas, facts, or allegations spread deliberately to further one’s cause or damage an opposing cause.” OneCOP’s cause is improving relations between cops and communities. They want to create enough good press to overshadow the bad press from decades of police abuse and constitutional rights violations.

The program is being framed as an initiative that is not reactionary, but instead aims to improve public safety on the front end. This messaging deserves a second look. The role of police officers is inherently reactionary. A crime takes place or is alleged to take place, the police are called, and then they react or respond to the scene.

To put the OneCOP program into context, it is important to understand the ways police engage with the public at large. One is through a consensual encounter—when someone is willingly participating in an officer’s investigation. For example, when an officer approaches a person on the street asking where they are going or coming from. The goal of these consensual encounters is either to gather enough evidence to justify an arrest or to gather evidence that can contribute to their investigation of another individual—a neighbor, a family member or, in the context of OneCOP, another member of your church congregation.

Police are the militarized arm of the state, and they are responsible for managing government interests in the Athens community. Police officers are not social workers. Quite literally, their job is to abduct people who have been accused of committing crimes and put them in cages where they wait (unless able to bond out) for a hearing before a judge. That arrest process often happens with little to no oversight or accountability for civilian safety.

Six Athens residents, most experiencing some degree of mental health crisis, were shot by police in 2019: Nan Zhao,  Salvador Salazar, Bonny Thomas, Aaron Hong, Carlton Steve Brooks and Thomas Wayne Swinford. All were killed except for Salazar, who was left in critical condition. Comparatively, in the previous year, local police investigated seven homicides. The number of deaths at the hands of police in 2019 was nearly equal to the number of people killed by civilians in 2018.

With odds like these, it is time for our leadership to re-evaluate where they budget our time and money to reinvest in solutions proven to change the conditions that breed crime, such as lack of access to education, living wage jobs, food, housing and mental health resources. Rather than investing in the community, the OneCOP initiative takes advantage of the goodwill of faith communities to expand the investigative capacity of local law enforcement under the guise of promoting public safety. It invests nothing into the communities of highest need, while still finding ways to disrupt the lives, families and neighborhoods of residents by putting them in jail, overburdening them with fines and fees, or criminalizing their children.