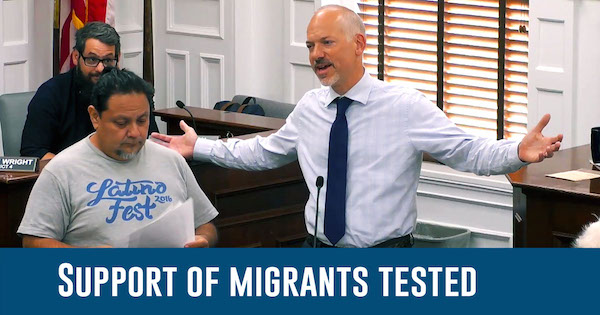 Once a year, the ACC Mayor and Commission has an opportunity to sit down with the Athens state legislative delegation to make requests for the upcoming legislative session. Requests that progressive commissioners make of the deeply conservative state legislature are routinely ignored and sometimes even directly refused. Commissioners who deem themselves more practical than progressive have stopped asking for such legislation—gun control, for example—which they know our shotgun-toting Gov. Kemp would veto immediately even if it were to pass.

The commission is now in the process of compiling this list of legislative requests. When the idea of mandatory gun registration came up, it was shot down quickly by Commissioner Jerry NeSmith. “That’s something I could never support,” said NeSmith. He went on to clarify that, beyond practical considerations, he opposes the concept of mandatory gun registration itself. He even refused to support the motion when limited to assault weapons only. (However, NeSmith does support the banning of assault rifles.)

The issue has strong support in national polls. When limited to assault weapons, approval becomes even stronger, with a majority of Republicans going so far as to support a complete ban on such weapons.

Nevertheless, Commissioner Andy Herod backed his colleague, calling the push to add gun registration to the list of legislative asks “virtue signaling.” Commissioner Melissa Link disagreed, saying she felt a “duty to constituents” to advocate for progressive policy at the state level.

Commissioner Allison Wright did not give an opinion on gun registration, but she did voice concern over other items on the list, including a request to allow undocumented immigrants to apply for driver’s licenses. Just two weeks ago, Wright joined other commissioners in expressing support for the undocumented in Athens and condemning government’s ongoing role in white supremacy. Driver’s licenses were one of the main requests made by undocumented community members who attended last month’s meeting. Wright gave few specifics as to the reason why she was refusing to pass along their request to state legislators, merely saying that there has been limited research on the “unintended consequences” of such a move. Later, she clarified that she didn’t know enough about the policy to vote yes, and didn’t realize she was preventing others from bringing it forward.

Wright removed four items from the list in total, including a request for better pay for UGA workers, an income cap to receive the HOPE scholarship and a pay raise for Board of Education members. After these items were removed from the proposal, the remaining list passed unanimously. The five removed items were to be voted on separately at a special called session at 4:30 p.m. today at City Hall.

Also at this meeting, Commissioner Mariah Parker made a motion to encourage cooperative development in Athens. She did so by amending the FY21â€25 Consolidated Plan Goals, which will guide the distribution of Community Development Block Grant (CDBG) funds received from the federal government for the next five years. The Vision Committee is responsible for advising the ACC Housing and Community Development Department and the commission on disbursing these funds in Athens. Two members of the Vision Committee formally supported Parker’s motion in writing to the commission, and a letter of support was also sent by the Georgia Cooperative Development Center. Parker added the words “cooperative development” to Athens’ economic development goals, thereby increasing the odds that CDBG funds might be given to organizations that support a more cooperative and democratic economic system. Her motion passed unanimously.

Oconee Roads Will Get Sidewalks and Bike Lanes