Oconee Roads Will Get Sidewalks and Bike Lanes 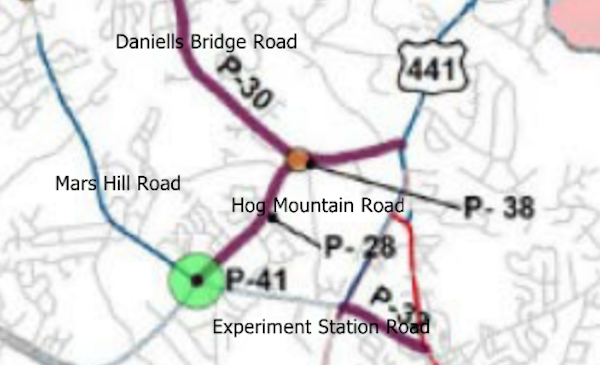 The regional long range transportation plan now before the public for review makes significant changes to the current document and provides for both pedestrian and bicycle travel on two key roadways in Oconee County.

Both bicycle and pedestrian facilities would be added to Hog Mountain Road from Mars Hill Road in Butler’s Crossing to U.S. 441, passing the Presbyterian Homes complex now under construction at the Hog Mountain Road intersection with U.S. 441.

Similarly, both bicycle and pedestrian facilities would be added to Daniells Bridge Road from its intersection with Mars Hill Road and the Oconee Connector to Hog Mountain Road.

The addition of sidewalks and bike paths or lanes to the two roads would make a rough rectangle with Mars Hill Road.

The “rectangle,” which touches many of the residential neighborhoods in the northeastern part of the county, also would connect to Watkinsville, when planned improvements are made to Experiment Station Road, and to the shopping complexes on the Oconee Connector and Epps Bridge Parkway.

Mars Hill Road already has bike lanes and sidewalks, as does the Oconee Connector and Epps Bridge Parkway. Experiment Station Road will as well when that project is completed.

Both Daniells Bridge Road and Hog Mountain Road, previously planned to be four lanes in width, would be restricted to two lanes with turn lanes.

These changes to the MACORTS 2045 Metropolitan Transportation Plan will be presented to the public from 5–7 p.m. today at Oconee Veterans Park, 3500 Hog Mountain Road. Citizens will be encouraged to offer comments on the plans.