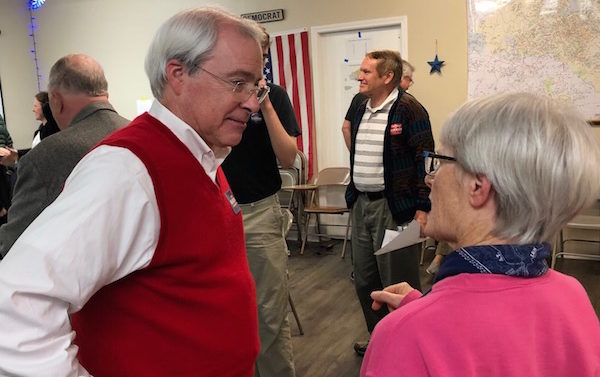 “Whoever wants it more wins,” Athens Democrat John Barrow told a small group of supporters during a last-minute campaign stop on Monday night, just hours before polls opened for a runoff election for secretary of state. “We need all the hay in the barn we can get.”

Barrow is running to be Georgia’s top election official, and Stacey Abrams supporters need no reminder of how important that position can be after her narrow loss to Republican Brian Kemp last month amidst widespread accusations of voter suppression and irregularities at the polls.

“Y’all know the stakes,” Barrow said. “I’m running for an office nobody knew anything about. Now the whole country has gotten a crash course.”

The gubernatorial race was the closest since neither Bo Calloway nor Lester Maddox won a majority in 1966, Barrow pointed out. Back then, the Democratic legislature threw the race to the segregationist Maddox, but now, runoffs decide it when no one gets over 50 percent.

Abrams’ performance proved Democrats can win in Georgia again, if elections are fair, Barrow said. And, he noted, both President Donald Trump and one of his biggest supporters, Sen. David Perdue, will be on the ballot in 2020.

“If everyone has an equal opportunity to vote, we’ll be making some changes in Washington, not just Georgia,” Barrow said.

Kemp, the secretary of state until he resigned after last month’s election, was widely criticized for his efforts to keep people—mainly minorities and women, who skew Democratic—from voting by aggressively purging rolls and requiring registration forms to match other government documents exactly, penalizing people for minor clerical errors.

Barrow credited Kemp for making registering to voter easier than ever—if only online and with the proper ID—but said “it’s ridiculously easy to be purged from the rolls,” which he called “outrageous.”

Barrow is known as “the most gerrymandered man in America” after Republicans redrew his congressional district twice in an effort to chase him out of office, finally succeeding in 2014.

The issue particularly affects heavily Democratic but relatively small Athens, which lost Barrow, a former ACC commissioner, as its congressman in 2006. Four out five of Athens’ representatives in the state legislature are Republicans, because the dominant party has split the city in such a way as to counteract Democratic votes by including conservative surrounding areas.

While the secretary of state has no formal role in drawing district maps, Barrow said he would be named as a defendant by virtue of his office in the inevitable lawsuit brought against the GOP’s maps when they’re redrawn after the 2020 Census—a role he relishes.

“I’m looking forward to being the fly in the Republicans’ ointment,” he said.

The Harvard-trained lawyer said he believes gerrymandering for partisan gain is unconstitutional, and several federal courts have agreed.

Barrow faces Republican Brad Raffensperger, a former state representative from Alpharetta, in Tuesday’s runoff. A Public Service Commission race pitting Republican incumbent Chuck Eaton against Democratic challenger Lindy Miller is also on the ballot. In both cases, a Libertarian candidate who won a small percentage of the vote meant neither major-party candidate received a majority.