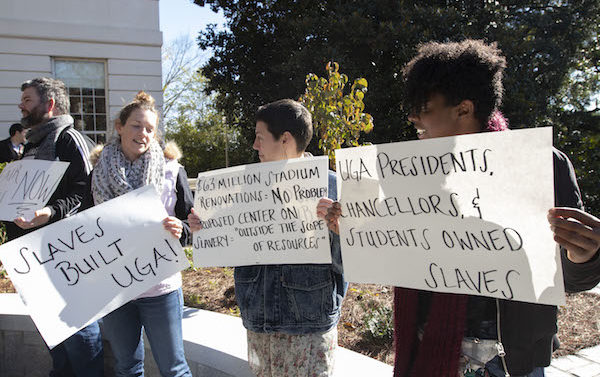 A small group of protesters, including Athens-Clarke County Commissioner Mariah Parker, held signs at Friday’s dedication ceremony for a memorial to slaves whose remains were found under Baldwin Hall to remind attendees of UGA’s history of slavery.

“We are drawn here today by a deep sense of respect for these individuals and by a strong sense of duty to commemorate the lives they lived,” UGA President Jere Morehead said. “The memorial we are dedicating this morning will provide for an enduring tribute as well as a physical space for meaningful reflection in the future.”

None of the three speakers—Morehead, U.S. District Court Judge Steve Jones and Vice Provost for Diversity and Inclusion Michelle Cook—mentioned slaves or slavery.

Documentary filmmaker Joe Lavine, a recent UGA graduate, and student Imani Scott-Blackwell asked Morehead why he didn’t address slavery, and did not get an answer. Lavine posted videos of the exchanges on Facebook.

UGA initially said the remains found buried under Baldwin Hall during construction in 2015 were white people, but subsequent DNA analysis and historical research found that they were mostly African-American and likely slaves.

The remains were moved to nearby Oconee Hills Cemetery on the advice of the state archaeologist, but without input from Athens’ black community, which includes potential descendents of those who were reinterred. Some critics wanted the remains reburied at one of two historic black resting places, Gospel Pilgrim Cemetery or Brooklyn Cemetery.

Morehead appointed an advisory board to design the memorial, which, according to the university, is intended as a place of reflection.

All photos by Savannah Cole. 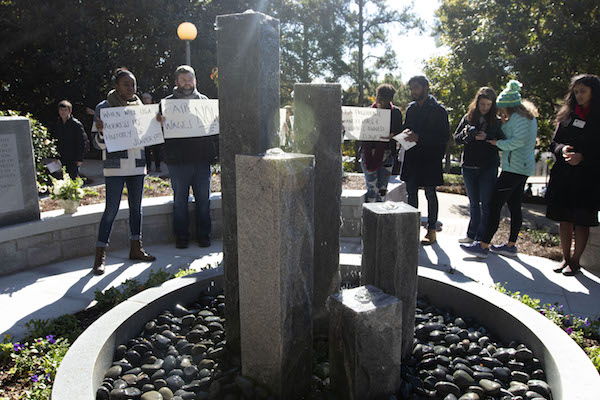 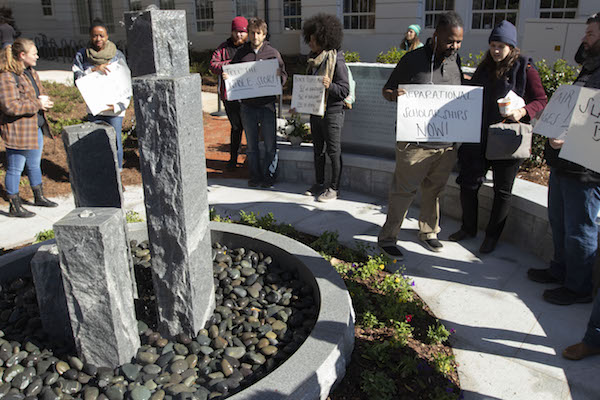 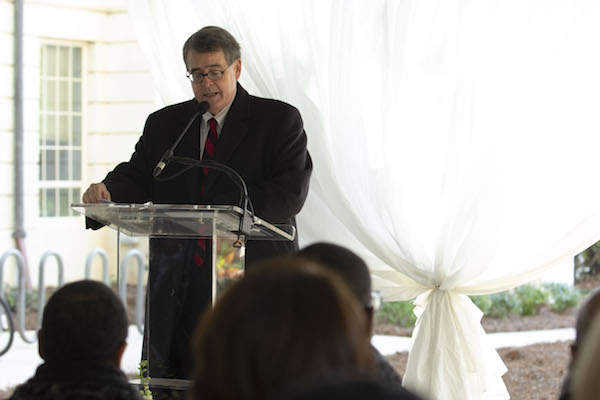 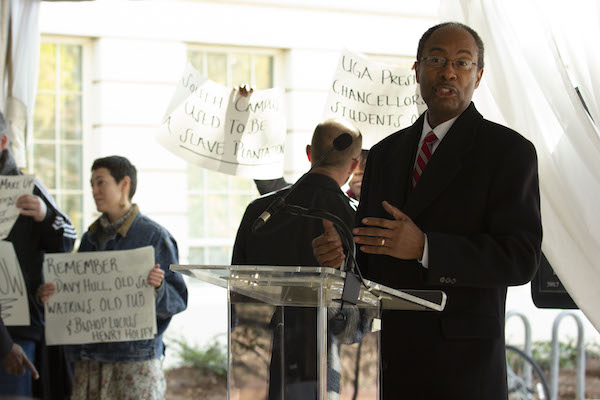 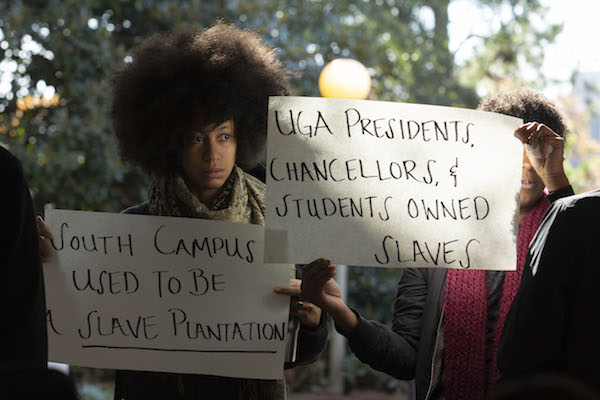 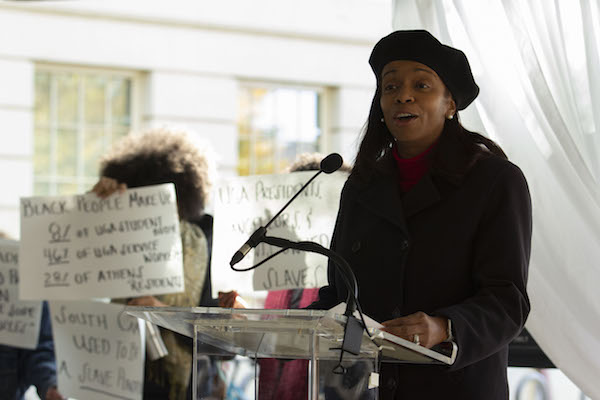 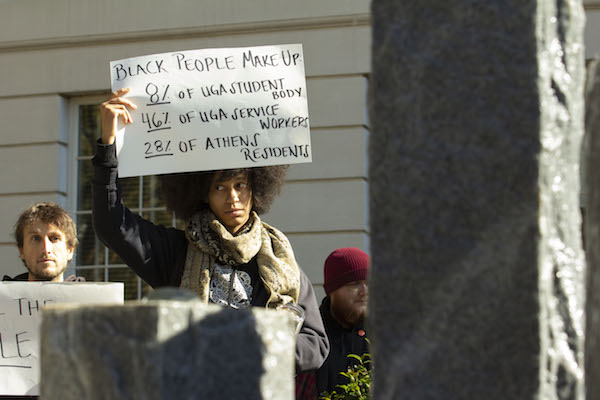 The group that interrupted Morehead’s speech released the following statement on Tuesday:

On November 16, 2018, a group of community activists and University of Georgia students, alumni, and employees interrupted UGA President Jere Morehead during his speech at the Baldwin Hall memorial ceremony to ask that UGA administration acknowledge and address its legacy of slavery. This action was not an isolated event, but a response to the administration’s inaction and obstruction over the last three years and the product of continued collective efforts of Athens natives, UGA faculty and students, and community leaders to address this inaction.

Fred Smith Sr. and other community members requested that the reinterment of the remains of the enslaved people be open to the public. Linda Davis requested that the remains be reinterred at a historically Black cemetery. Alvin Sheats requested that the University grant reparational scholarships for descendants of slaves that worked at UGA. The UGA administration refused each of these asks. UGA Faculty proposed a “Center on Slavery” to document and display the University’s history of slavery. They were told it was “outside the scope of resources.” The UGA Student Government Association passed a resolution to call for a monument on north campus “dedicated to all enslaved peoples held and employed by the University of Georgia,” but UGA administrators pressured student leaders not to pass it, and it was vetoed. The administration has continuously tried to control the narrative and restrict community input in order to avoid a deeper conversation about the history of slavery on campus.

Only a thorough accounting of UGA’s participation in the institution of slavery and concrete actions to repair the ongoing damage caused by slavery can make our community whole. It is time for the UGA administration to start listening to the requests of its community. It is time for UGA to fund efforts to research and redress its full history. It is time for UGA to invest in reparational scholarships and guarantee full access to education for Black Athenians. And it is time for UGA to implement wages of at least $15 an hour for all its employees and take further steps to end its history of worker exploitation. The social and economic inequities that Black Athenians face today are part of slavery’s ongoing legacy, and UGA must confront and bear responsibility for its complicity in this violent institution.

Those of us who planned and participated in the action want to thank Fred Smith Sr., Linda Davis, Alvin Sheats, Linda Lloyd, the United Campus Workers of Georgia, the Anthropology Department, the History Department, Franklin College Faculty Senate members, UGA student leaders, and everyone else who has played a part in working to address the history of slavery at the University of Georgia. We look forward to working with all of these parties towards a UGA future we can be proud of.

This post has been updated to reflect that Lavine is no longer a student at UGA.