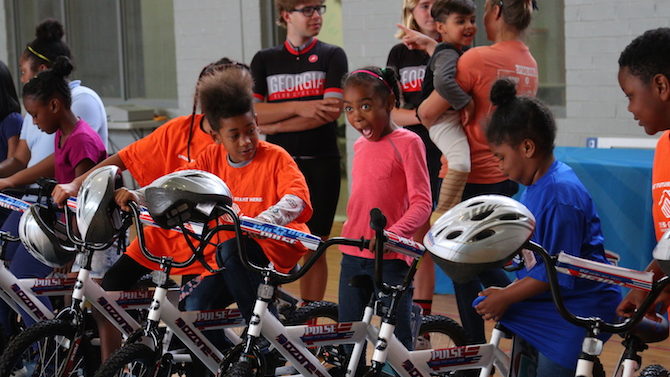 In a partnership with Athens Twilight, Academy Sports + Outdoors donated 25 bikes and helmets to members of the Boys & Girls Club of Athens on Tuesday afternoon.

The event was held to encourage local kids to spend more time outdoors, and the bikes were donated to children selected on need and good behavior.

“We’re very excited to be able to do this for the community,” said Cody Reid, the senior regional marketing specialist for Academy Sports. “We want to promote a more active lifestyle and get them outdoors.”

As almost 90 kids waited to hear who had won the bikes, two members of the UGA club cycling team gave a brief demonstration on how to properly wear a helmet while encouraging them to spend more time outdoors.

The group of children were made up of members from the Joel E. Smilow program, The Club @ H T. Edwards program and the Winder Barrow Boys & Girls of Athens program. Derrick Floyd, the Athens Boys & Girls Club director of operations, called out one-by-one the names of the eager members who had won a bike.

Twilight spokeswoman Ashley Travieso invited the recipients to ride their new bikes at the Academy Sports Kids Criterium race on Saturday morning and in the AKO Signs Kids Parade Lap at 6:30 p.m. on Saturday night. The kids’ race is free to participants, and all that is needed is to race is a bike and a helmet. The race starts at 10:30 a.m. and racers are grouped by age, bike type and gender.