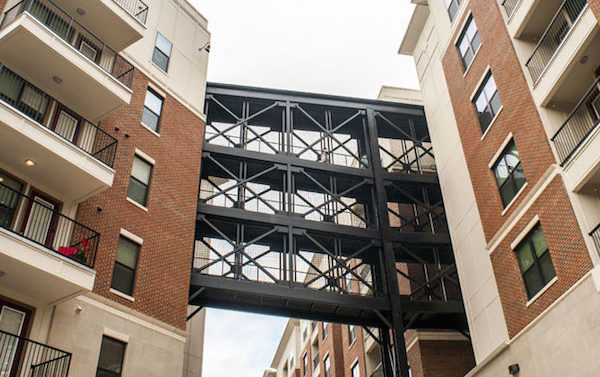 The Standard is one of several luxury student apartment complexes to open downtown in the past few years.

Athens-Clarke County commissioners will vote on a one-year moratorium on most new bars and apartment buildings downtown at its meeting Tuesday night.

The moratorium was added to the commission agenda late this afternoon. It would cover new bars—except those that open in spaces where another bar has closed in the past 12 months—with capacities larger than 49 people. New residential developments of more than three units would be temporarily banned as well.

ACC Manager Blaine Williams said the moratorium idea grew out of health and safety study the commission initiated last year over concerns about binge drinking, underage drinking, discrimination and overcrowded sidewalks when bars close at 2 a.m. Those problems have been exacerbated by the thousands of new student apartments that have been built downtown in the past few years or are set to open this fall.

That study is just now getting underway, and the moratorium will “preserve the status quo” until the results are in, Williams said.

“We’ll get to the other side of this study and see what we can do,” he said.

Downtown student apartment construction has been controversial in Athens. Some wonder whether older student apartments will become dilapidated Section 8 housing and worry that the influx of students is changing the character of downtown. Others say downtown density will keep people out of their cars, leading to a more environmentally sustainable city, and predict that students will draw new businesses that will in turn draw other types of downtown residents.

Commissioners put a moratorium on residential development downtown in 2011 while county planners studied whether the area had the water and sewer capacity to support thousands of new residents. Downtown’s zoning allows 200 bedrooms per acre, which planners recommended dropping to 55. But commissioners decided reducing density wasn’t necessary because many parcels, such as government buildings and properties in the downtown historic district, would never be developed as apartments. They lifted the moratorium in 2012.

Commissioner Melissa Link, who represents downtown, said she supports the moratorium. In fact, it’s five years too late, said Link, who’s been calling for a moratorium since before she was elected in 2014.

There aren’t many big parcels left downtown for major student-apartment developments, and Williams said he isn’t aware of any on the horizon. But there has been speculation that Landmark Properties, which is developing The Mark, the massive apartment, retail and hotel development at Oconee and Wilkerson streets, will redevelop the adjacent Potterytown neighborhood after buying several parcels there.

The bar moratorium is unlikely to draw much criticism, as some bar owners have proposed a moratorium themselves to get a handle on the downtown bar scene.