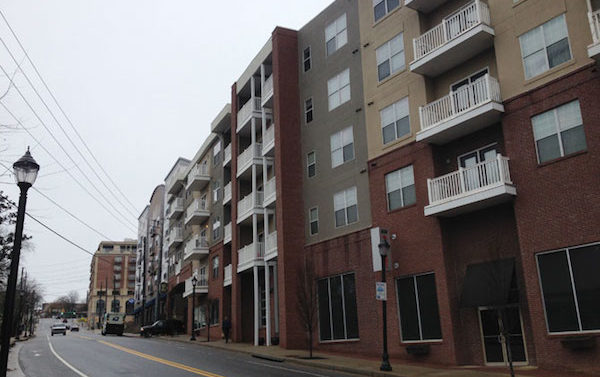 As expected, the Athens-Clarke County Commission approved a temporary ban on most new downtown bars and apartment buildings Tuesday night over concerns about overcrowding and the downtown drinking culture.

The ban covers bars with a capacity greater than 49 people, unless they open in a space that housed a bar within the past year, and apartments with more than three units. It will last for up to one year while a consultant conducts a study on downtown health and safety, and commissioners consider potential new regulations.

Mayor Nancy Denson said she placed the moratorium on the commission’s agenda Monday afternoon to give officials a chance to get a handle on “crowding” and related challenges delivering services like garbage pickup, as well as “excessive drinking.”

A number of county officials, as well as many residents, have expressed concern that development and new businesses downtown are almost solely geared toward students, and that other groups, such as families and seniors, are being pushed away.

Although “we can’t prohibit student housing,” Denson said, “what we’re trying to do is encourage a healthy mix.”

For almost 20 years, ACC has encouraged development downtown and discouraged it on the outskirts of the county in an effort to curb sprawl and focus development where services already exist. That has had some unintended and unwelcome consequences, in terms of downtown’s lack of diversity and the local government being somewhat unprepared for several thousand new residents in a small area within just the past few years.

That’s something ACC has been slow to recognize, said Commissioner Melissa Link.

“You didn’t have to be a rocket scientist to predict that these kinds of problems would ensue,” she said.

“There are things we didn’t deal with incrementally that we have to deal with now,” Commissioner Kelly Girtz said. “Better to deal with them now than ignore them altogether.”

As Commissioner Diane Bell noted, concentrating development downtown has had benefits, such as encouraging people to walk rather than drive. The effort to stop sprawl was successful, she said.

Bell supported the moratorium in spite of her son, bar owner Mark Bell, speaking out against it.

Although it could curb competition for Mark Bell, at least for the next year, he argued that the moratorium is just another example of the local government taxing and regulating bars to the hilt.

“Many towns would kill to have what we have here in Athens,” he said.

Other speakers were critical of the moratorium’s timing, saying they should have been given more time to weigh it. The 24-hour notice violated the spirit, if not the letter, of the state open meetings law, lawyer Adam Hebberd said.

“For this to be hidden from people, it’s alarming,” downtown business owner Richie Knight said.

Commissioners defended the short notice by pointing out that the moratorium is only temporary, and that it gives everyone time to consider what should be done, if anything.

Left unsaid was that more notice would have given developers more time to circumvent the moratorium by rushing to apply for permits, as Kappa Alpha did just hours before the commission put a moratorium on fraternity houses in residential neighborhoods in 2006.

The downtown moratorium passed 8–2, with commissioners Jerry NeSmith and Jared Bailey voting against it.

This post has been updated to correct the commission vote.