The Pope on Prince Is Leaving Prince 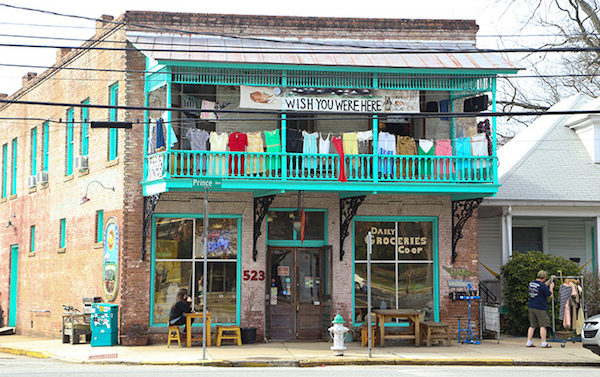 The Pope on Prince is about to become the Pope on Jackson when it moves into Community’s former space at 119 N. Jackson St., above the downtown Jittery Joe’s.

Monica Bischoff, owner of The Pope, said the rent for her current space above Daily Groceries is too high. The space downtown will cost much less and has steady pedestrian traffic, and she doesn’t have to deal with the steep stairs that lead to her current store getting slippery and dangerous during rain. The downtown space also has central air conditioning, while the current Pope is equipped with window units only.

“I don’t think that Prince Avenue is good for retail,” Bischoff said. “The foot traffic here is awful, crossing Prince may cost you your life, and I’m not making any money.

“The people downtown were a lot more flexible with the rent, they actually gave me two months rent free,” she said, adding that although she had wanted to serve the “other half” of the population, instead of just UGA students, there isn’t enough money in the non-student community to keep a store like hers afloat. And mom-and-pop shops tend to struggle during the summer, when students go home and take their cash with them.

Suska, another local clothing store that was located in the Bottleworks, closed up shop earlier this month, leaving the Prince corridor with two fewer retail stores.

Bischoff thinks that the only way for small businesses to survive the summer and thrive during the school year is to band together and collaborate. When Susanna Drennan closed Suska closed down with intentions of moving her store online, Bischoff bought out the store’s paper bags, display cases and other odds and ends to use at The Pope.

It doesn’t bother her that the paper bags she puts customers’ purchases in say “Suska” on the front. Instead, she said that cross promoting is the best way to help the small business community in Athens. She looks to Miami and Portland, OR as examples of healthy economic environments for local stores.

If the new downtown space doesn’t work out, she said there’s always her dream of moving to Colorado.

The West Broad Garden Is Safe for Now, but Its Funding Is Being Cut