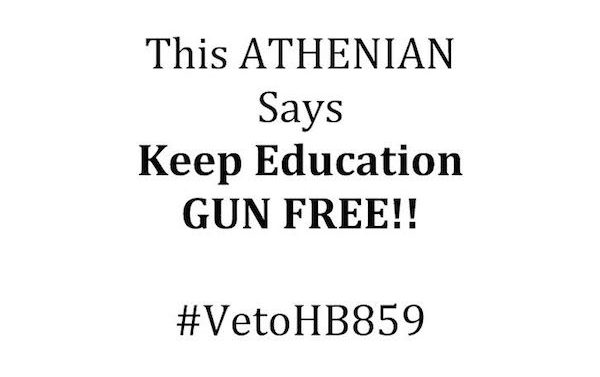 A group of University of Georgia poets has joined the widespread opposition to HB 859, the “campus carry” bill that would lift a ban on guns in university classrooms and offices.

Magdalena Zurawski, a UGA creative writing professor who was featured in Flagpole last year, and Jenny Gropp, managing editor of the Georgia Review, have created a group called the Poetry Action Network to oppose the bill. They’re asking people to send in photos of themselves holding signs stating their opposition to the bill (an example is above) so the photos can be forwarded to Gov. Nathan Deal’s office. Deal has until May 3 to sign or veto the legislation.

Here’s the full letter from Zurawski and Gropp that’s circulating around town:

Our university system in Georgia is under threat. This spring the state legislature passed a law that would allow people age 21 and over to carry concealed weapons on public campuses in the state. Right now the bill sits on Governor Deal’s desk. He has until May 3 to either sign or veto the bill.

As some of you know, we are poets who work at the University of Georgia in Athens. Maggie is a professor in the English department and Jenny is the managing editor of the Georgia Review. In an effort to fight the campus carry bill, we have decided to create the Poetry Action Network. We want to protect our students, our colleagues, our classrooms and offices, and ourselves, and we hope that you—the poets, writers, and editors who we’ve come to trust—will join us in protecting public spaces of education. And we welcome anyone who wishes to help to join us, too.

This bill has been passed by our legislature despite the opposition of every public college and university president in the state and the entire board of regents. The campus and local police are also against it, along with 78% of Georgians. So why is this happening? Once again, this time thanks to the gun lobby, public space is being coopted by private interests. And the bill is unfunded, with implementation costs estimated between $40 and $70 million. These dollars will presumably come out of the state’s budget for the university system, putting education in danger of yet more financial shortfalls.

This isn’t an issue specific to the state of Georgia. Guns and gun violence are an American problem. And many of us teach and work at universities. We see campus carry as an important political issue for poets, writers, and editors throughout the United States. The gun lobby came for Georgia now, but we have no doubt they will knock on your university’s door soon if these politics are allowed to persist.

Anyone who has taught creative writing knows the sensitive nature of their particular classrooms. Difficult and sometimes controversial topics come up in student work shared in the safe space of the workshop. This is precisely why students value creative writing classes. A few weeks ago Maggie’s undergraduate students interrupted workshop because of their very real fears about how this bill would change the nature of class discussion. How can we have the free exchange of ideas and share provocative work if we are always wondering if someone in the room is carrying a gun? The latter expression should never supersede the former as a representation of our freedom.

So why are we writing? We are hoping that you and your students or other members of your community might support us on April 20th for a day of action demanding Governor Deal veto the campus carry bill.

What do you need to do to help? Print out the attached sign, fill in the blanks, and take a picture of yourself, your class, your friends, your office team, or anyone else who is in solidarity with us and our campus communities against campus carry. Or make your own sign of support. Then email the picture by Monday, April 18th to poetryactionnetwork@gmail.com. We will then Twitter bomb the governor with your photos of support all day on Wednesday, April 20th.

We would appreciate you forwarding this letter to any parties who might support us.

We are hopeful that the POETRY ACTION NETWORK will be useful to all of us not only in this moment but in the future.” If we are successful in this initiative, let it be the beginning of more activism to come.

With love and solidarity,