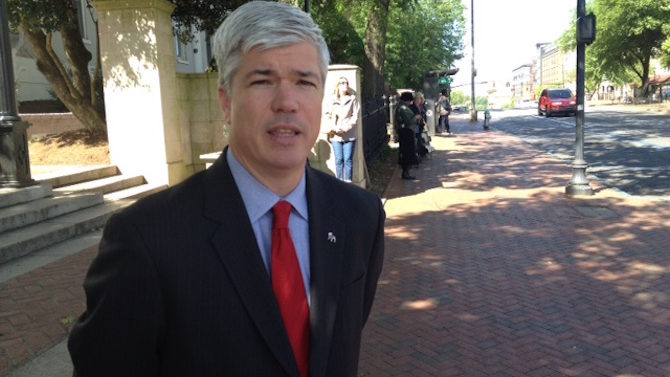 A prominent ethics activist is calling on the University of Georgia to fire Police Chief Jimmy Williamson, settle a whistleblower lawsuit filed by a former employee who claims she was fired for reporting potential fraud to higher-ups and reform the process for investigations into employee wrongdoing.

William Perry, the former head of Common Cause Georgia who has started his own group, Georgia Ethics Watchdogs, delivered a letter this morning to UGA President Jere Morehead with several demands.

Williamson fired Officer Jay Park in 2014 after Park twice refused to arrest underage drinkers because of a state law giving amnesty to students who request medical treatment for intoxication, even though his superiors ordered him to make the arrests. Park filed a lawsuit and settled with the Board of Regents for $325,000 last year, and his police certification has been reinstated.

Perry said that Williamson himself should be fired. “I think it’s time for UGA to end its relationship with the police chief and get a police chief who knows the law,” he said.

Then there’s the case of Sallyanne Barrow, a former accountant for the UGA Alumni Association. Barrow reported that her boss, Deborah Dietzler, was violating university policy by scheduling her work travel around her personal hobby of running marathons, among other things. An internal investigation recommended that the university not renew Dietzler’s contract, but the language was softened, and Dietzler’s boss, the now-retired Tom Landrum, gave her an equivalent job while she found a new one. UGA never reported the allegations to the Board of Regents, as it was required to do. Eventually Dietzler, with Landrum’s help, took a lucrative fundraising position at the University of Louisville, which she quit when WSB-TV exposed the scandal.

Perry compared the Dietzler case to the Jan Kemp scandal. (Kemp was an English professor who blew the whistle on administrators intervening to keep football players eligible academically in 1981; she was demoted, dismissed and, after winning a lawsuit, reinstated.)

He called on Morehead—who was briefed on the Dietzler investigation while it was ongoing—to settle Barrow’s lawsuit, conduct an independent audit of all the alumni association staff’s travel and leave for the past five years and issue a plan to improve the Fraud Committee, the internal group that investigated Dietzler.

At best, UGA’s investigation was grossly incompetent; at worst, it was a coverup, Perry said. “This university has messed up, it’s messed up big, and it needs to fix it,” he said.

The university issued this statement late Friday: “This morning, the President’s Office received an emailed letter from a Mr. William Perry making various ‘recommendations’ to the University.  While Mr. Perry’s letter is uninformed and inaccurate in several respects, the University has no obligation to engage in dialogue with him about a matter that is currently in litigation and with which he has no involvement. Instead, the University looks forward to the opportunity to tell its side of the story in the context of the pending litigation.

At the President’s direction, the University has already taken steps to ensure that our university auditors promptly report all instances of employee malfeasance to the University System for review and referral to the Attorney General’s office as appropriate.”