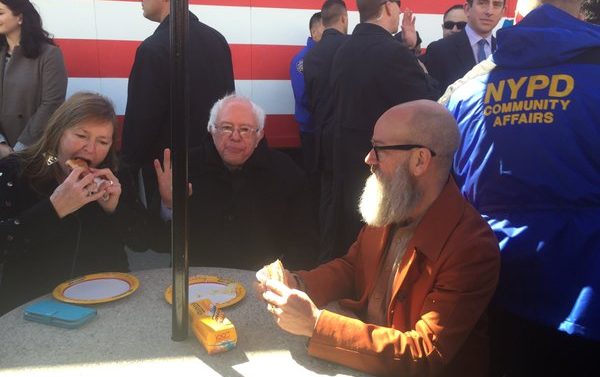 Former R.E.M. singer Michael Stipe is looking forward to the day when a Bernie Sanders presidency isn’t merely a Coney Island of the mind.

Stipe (and his Marxist beard)—who endorsed Sanders in a February Rolling Stone interview—introduced him at a Coney Island rally on Sunday. (Sanders grew up in Brooklyn, while Stipe is a part-time New Yorker.) The Vermont senator is trying to cut into former New York Sen. Hillary Clinton’s double-digit lead in the Empire State’s Apr. 19 primary.

“Over the years of traveling across the United States and outside America with my former band, I’ve discovered within myself an underlying but potent appreciation of justice and a common decency,” said Stipe, who also praised Sanders for voting against the Iraq war, pushing for LGBT equality and marching with civil rights leaders in the 1960s. “I seek out leaders who represent themselves honestly and fairly and who share the same appreciation of justice… Bernie Sanders isn’t worried about political expediency or doing what polls might say is the right thing to do. His moral compass is due north and that is exactly what we need right now.”

Then they ate hot dogs.

Athens Power Rankings for the Week of Apr. 11