The Race to Replace Paul Broun Is On 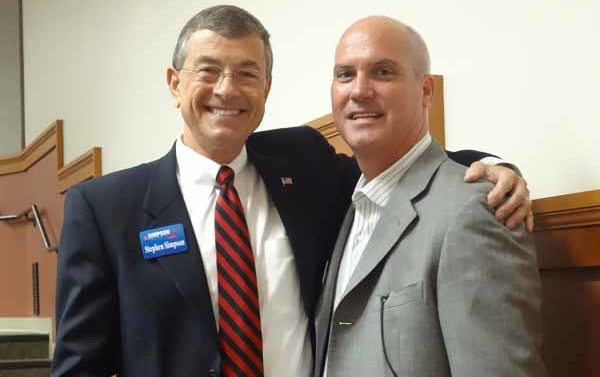 Clearly, Stephen Simpson is happy to have Carlton Norwood’s support.

The race to replace U.S. Rep. Paul Broun (who is seeking a promotion to the Senate) is officially on. University of Georgia College Republicans hosted the first 10th Congressional District forum of the campaign season Wednesday night. Here are a five takeaways:

• The family of Rep. Charlie Norwood, who represented Northeast Georgia for 12 years, has endorsed Stephen Simpson, a retired Army colonel from Milledgeville who ran against Broun in the 2012 GOP primary.

“We feel like Col. Simpson is the best candidate to succeed my father,” said the late congressman’s son, Carlton Norwood, who was campaigning with Simpson prior to the forum.

Norwood is still well-respected in the Augusta area, but his widow’s endorsement didn’t help Jim Whitehead against Broun in 2007.

Moderator Charles Bullock finally had to cut him off. “Don’t go through your whole list, thank you,” Bullock said, reminding Slowinski that this isn’t the Senate; you can’t filibuster.

• Oglethorpe County lawyer Gary Gerrard was the lone voice of reason amongst all the talk of this and that being unconstitutional. “The Supreme Court has not declared any of those programs to be unconstitutional,” he said. “They are all within the power of Congress to enact.”

• All of the candidates—Mike Collins, son of former congressman Mack Collins, state Rep. Donna Sheldon (R-Dacula) and minister/talk radio host Jody Hice are the others—favor the Fair Tax. All of them want to repeal “Obamacare.” In fact, according to them, that would solve just about every problem we have. The national debt’s too big? Repeal Obamacare! Can’t find your keys? Repeal Obamacare!

That’s no surprise, but what was surprising is that all of the candidates are opposed to military intervention in Syria. It’s amazing how quickly Republicans turned from hawks to peaceniks once a Democrat wanted to start a war.

• No questions were asked about social issues at all—nothing about abortion, prayer in school or teaching evolution. Nothing about global warming, either. Should we just assume they’re all lies straight from the pit of Hell and move on?

Not that it means anything, but here are the straw poll results: