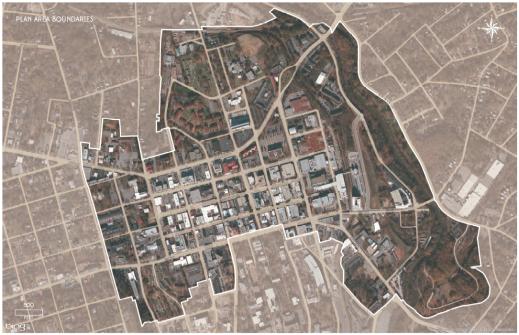 Flagpole has obtained a draft map for the downtown Athens master plan that University of Georgia College of Environment of Design professor Jack Crowley is circulating among community groups. Here are some of the highlights:

• a park around City Hall.

• a greenway running along Jackson Street from Hancock Avenue to the Lyndon House and Lay Park.

• rebuilding the Murmur Trestle as part of the Firefly Trail from downtown Athens to Winterville to Union Point.

• a traffic circle at the Thomas Street-North Avenue intersection.

• new buildings with artists’ studios, retail and entertainment between Foundry Street and the Multimodal Transportation Center, AKA the river district.

• an amphitheater near the Willow Street-Hickory Street intersection.

• a passenger rail line not only to Atlanta, but also from Multimodal through the UGA campus to the Botanical Garden. (This has long been one of Crowley’s pet ideas.)

• medians and plantings along Oconee Street.

• replacing the public housing just west of campus and realigning Florida Avenue to match up with Pulaski Street at Broad Street. (This would make up for a connection lost when South Hull Street was closed for the UGA Special Collections Library.)

• making Meigs Street one way going towards downtown and closing the alley near The Grit for outdoor dining.

Of course, there’s no funding yet for any of these projects (except the City Hall streetscape), and they still need to be vetted by citizens. A public hearing is planned for April, though no date has been set.