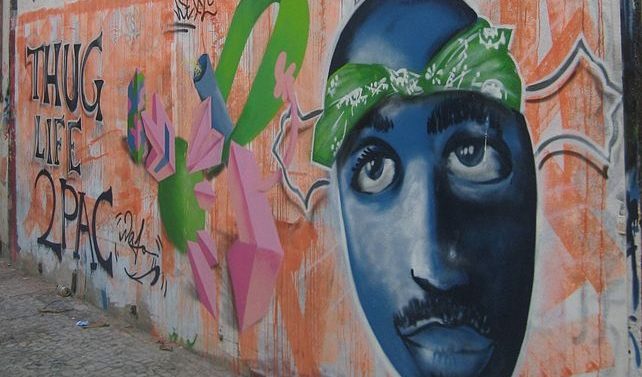 “You never thought that hip-hop would take it this far.”
—The Notorious B.I.G.

Recently, Senator Marco Rubio (R-FL) sat down at a local Capitol Hill bar for an interview with BuzzFeed editor-in-chief Ben Smith. Among the topics discussed were immigration reform, climate change and his thoughts on the late great rappers Tupac Shakur and The Notorious B.I.G. Granted, those first two issues have important policy-making implications in the 113th Congress and for the country as a whole. But that last point of discussion, a question regarding rap music’s largest-looming legends, is what captured my attention.

Hip-hop music has long been a whipping boy for politicians looking to make a point about America’s cultural degradation. And why not? Rap doesn’t exactly make it that difficult. Even as someone who loves the art form, I can’t get down with all the ever-pervasive “bitches,” hoes,” outmoded notions of masculinity and casual violence permeating the music.

But Marco Rubio is 41 years old. He attended college and law school in the early ’90s. Rap music is the soundtrack to the formative years of his social development. Dr. Dre’s The Chronic was likely blasting at his dorm parties.

While watching the interview, you see Rubio seriously explaining his preference for 2Pac over Biggie, calling the former’s lyrics more “insightful.” While I wholeheartedly disagree with that sentiment (I mean, has he listened to Ready to Die?), I respect that a politician can articulate a well thought-out opinion regarding the difference in the two. You also see Rubio clearly delineating the stylistic changes in Tupac’s music once he became aligned with the infamous Death Row Records. Not only that, he even understands the origin of that fatal feud which sucked up so much of the oxygen from the hip-hop world in the mid-’90s.

Here’s Rubio when asked if there were any political lessons he learned from 2Pac:

Rubio: I don’t listen to music for the politics of it… But you know, in some ways rappers are like reporters. Especially in that era, in the ’90s. People kind of picked up on it the wrong way. They thought that people were condoning a certain lifestyle. Maybe that was some of that in there…

Ben Smith: And did you identify with it, growing up?

Rubio: [laughs] I didn’t grow up in South Central L.A. But, I mean, you certainly understood that was a reality that was going on at the time. So the ’90s, which was when this was really taking off, was a time when this was really pronounced in L.A. You had gang wars, racial tension coming off the Rodney King stuff… and they were reporting on that. As much as anything else, the music was a reflection of what was going on at the time.”

When explaining hip-hop’s historical role in society, Rubio co-opts a popular argument used by most defenders of hip-hop: that rappers are “reporters” covering what’s really going in the streets of America. One can’t help but be reminded of Chuck D’s famous declaration that rap is “CNN for the Black community.”

Rap music’s relationship with politics has been complex. While it has enjoyed a certain status as a popular scapegoat for society’s ills, some politicians have transparently cozied up to hip-hop and (to a larger extent) youth culture whenever it’s become politically expedient for them to do so. This usually means connecting to The Youngs by having their 23-year-old staffers download Kanye West onto their iPods so they can mention it in a Rolling Stone interview, or having rappers like T.I. or Ludacris perform for them at voter registration rallies. And who can forget the 2008 Democratic Presidential primary?  Out on the trail, the day after a particularly nasty debate, candidate Barack Obama stood at a podium and “brushed his shoulders off,” a Jay-Z reference that sent the audience into a frenzy and had political pundits lauding the genius of Obama’s dog whistle politics.

But Obama didn’t grow up listening to rap music. In his memoir, Dreams from My Father, he describes a post-party scene in which he retires to his dorm room to smoke cigarettes and listen to jazz records. He may indeed enjoy rap, but it isn’t the music that defined his generation. Yet there probably isn’t a politician more popular among those in the hip-hop community (despite Lupe Fiasco’s objections).

Which brings me to another fact about the Rubio interview that makes it so fascinating: Rubio is a Republican. Conservatives have long ceded the hipness factor to liberals. The celebrity supporters that the GOP draws will never be as cool as the ones hobnobbing with Democrats. I mean, just look at the list of 2013 presidential inaugural performers: Beyonce, Usher, Katy Perry, Alicia Keys, Jamie Foxx. Had Mitt Romney emerged victorious last fall, those attending the inaugural ceremony would likely have been treated to the musical stylings of The Oakridge Boys and Meatloaf.

But of course, many of my Republican friends love rap music. And what I still consider to be one of the most bizarre stories of political and musical words colliding involved gangster rapper Eazy-E, aka Eric Wright, and then-Senate minority leader Bob Dole (R-KS). In 1991, after contributing nearly $2,500 to the Republican Party (at the coaxing of Phil Gramm [R-TX]),Wright received an invitation from Dole to attend an exclusive White House luncheon. A luncheon in which President George H.W. Bush addressed the Republican Senatorial inner circle.

There’s nothing odd about entertainers visiting the White House. But it is odd is that Wright, a 23-year-old ex-gangster, ex-drug dealer would be one of those invitees. After all, it was only two years earlier that Wright and his pioneering gangster rap outfit, N.W.A., were under investigation from the F.B.I. due to lyrics that they deemed hostile to law enforcement (“Fuck tha Police,” anyone?).

But what you have in Rubio is a young, Hispanic Republican senator intelligently discussing two titans of rap music and their respective relevance to American culture. Dare I say that something as seemingly innocuous as these throwaway questions at a happy hour Q&A marks a tipping point in American rap music? I dare.

Rap music, which, at its very essence, is an anti-establishment form of expression (again, see “Fuck tha Police”), is at an age where the very kids who grew up listening to it are becoming the establishment. This type of contradiction isn’t specific to rap music. Just last year, 69-year-old Mick Jagger, lead singer of the Rolling Stones (once deemed a dangerous band corrupting the youth of America) performed at the White House for a president who was months old when the Stones even formed. This is how music grows up.

Hip-hop is traveling on a similar trajectory to that of rock and roll. Once a young man’s game, its stars are growing older, just like its audience. This doesn’t mean that it will lose all of its edge or bite, or that its pioneers and biggest stars will completely forget rap music’s core and spirit. But the torch of irreverence and disregard for authority characteristic of rap music will be carried largely by a younger stable of rappers that will continue to emerge and stake out their own territories in the hip-hop landscape. That anti-establishment sentiment will then likely continue to be pushed further out of the mainstream and into the underground. (It’s difficult to imagine records in the vein of Public Enemy’s It Takes a Nation of Millions to Hold Us Back or Ice Cube’s Death Certificate being released today and having such broad cultural impacts.)

While Rubio’s conversation points to a certain maturation of rap music, it also marks a subtle generational shift. Baby-boomer taste making is in the beginning of its last throes. A friend of mine mentioned that in 10 years it’ll be perfectly normal to listen to a presidential candidate discuss his love for Radiohead. And one can also envision a day when Jay-Z’s “Public Service Announcement” blares after a campaign victory speech.

I don’t even think Biggie Smalls could have seen hip-hop taking it that far.