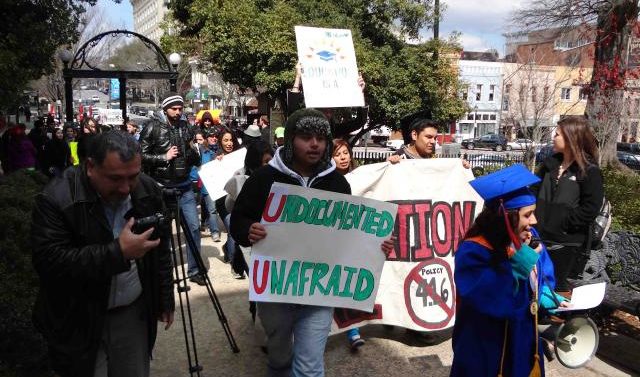 A couple hundred people gathered at the Arch this afternoon and are marching through campus to protest a ban on undocumented immigrants attending the University of Georgia. The protesters were affiliated with Freedom University, which offers classes regardless of immigration status. Here’s a statement from two of the student organizers, Melissa Padilla and Miriam Zuniga:

It has been two long years since the Board of Regents enacted the ban against undocumented students here in the state of Georgia. Aimed at answering the negative atmosphere connected to immigrant rights here in our state and throughout the country, the Regents, in 2011, concocted a policy which they said would keep the growing concern of undocumented students from taking a lawful person’s spot in a college classroom. At the time the ban was implemented, this concern consisted of less than 1% of the higher education student population, which leads one to ask whether this policy is more a political solution to the problem or punishment by means of segregation?

In light of positive steps toward immigration reform and the ban creating more problems than a positive solution, members of Freedom University have collectively united to bring attention to the ban’s egregious and racist attack on both education, undocumented students, and the memory of the efforts of Civil Right activists of the 1950’s and beyond. Rallying together under this creed, the Freedom University members began the arduous yet satisfying task of assembling together for an action against the injustice committed against students.

We, the students at Freedom University, ask for your endorsement, to stand by us and support us as we make a stand on this new kind of segregation. Project U, a rally at the University of Georgia Arch on March 6th, 2013, has been planned by Freedom University students to make our position known. With support from not only the community, but also from the UGA student population, we hope to make others aware of the issue and work towards a solution to this policy. Your help is needed to make this action a success, Endorsing Project U and standing by our side and the side of equality, we can make Project U the first step towards justice.

Freedom University and the community would feel honored to count you in as a endorser and as a supporter in our fight against the ban prohibiting undocumented student from attending the top five universities in the state of Georgia. Come out and make a difference with us!