You’re Probably Wasting More Energy Than You Use 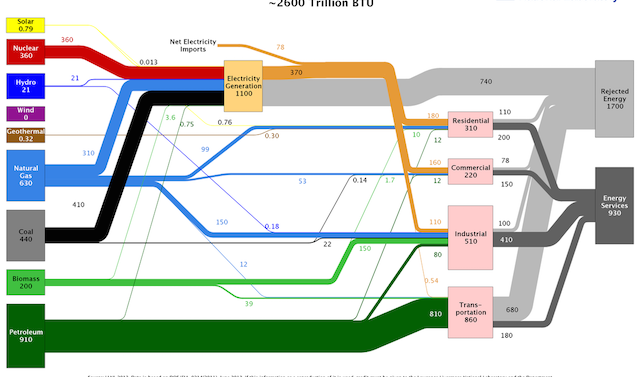 If you remember hearing “energy can neither be created nor destroyed,” then you already know the first law of thermodynamics. Energy can change forms, but the total amount is conserved. The second law tells us that no system is 100 percent efficient: As energy changes forms, some of it dissipates as low-value heat energy.

You can think of efficiency as the amount of energy put into a process that results in some benefit, such as motion, cooling or computation. On the flip side, waste is the energy in the process that is dissipated without doing anything useful. For example, gasoline is a form of stored chemical energy. When burned in a car’s engine, some of it is used to power the drivetrain and move the car. But there is enough waste heat from that process that you need a coolant system to dissipate that heat to the surrounding air. When you slow or stop, the energy that went into speeding up is lost as friction that heats the brakes. More than 70 percent of the energy in the gasoline you burned to get from A to B was lost as waste heat.

It is important to know where the envelope is drawn around a system when describing its efficiency. Electric water heaters are often called 99 percent efficient (the 1 percent is lost through the sides of the tank). This is only true if you draw the envelope around the water heater itself. If you extend the envelope to include the tank, your shower and the pipe in between, the hot water left in the pipe when you turn off the shower slowly loses heat to its surroundings. Expand the envelope many miles to the power plants that generate the electricity, and you’ll find a coal plant is around 30 percent efficient, the best natural gas plants are 54 percent efficient, and around 9 percent of the power plant output is lost as resistance (heat) in the transmission lines.

A typical natural gas furnace has an efficiency of 80 percent or so. That means that 80 percent of the energy content of the fuel that goes into the burners is turned into useful heat that transfers to the air passing through the ductwork. The other 20 percent of the energy is lost up the flue in the form of hot gases—mostly water vapor and carbon dioxide—that are produced when natural gas burns. If you spend a little more on a condensing furnace, it will allow those flue gases to cool enough to allow the water vapor to condense into water. This process transfers what would have been wasted heat back into the system, bringing its efficiency up to about 95 percent.

Efficiency as a percentage is very common, but many of the things we interact with daily have unique efficiency expressions. We are all familiar with miles per gallon, though with the proliferation of electric cars, we’re starting to learn about kilowatt-hours per mile. Lighting efficiency is expressed in lumens per watt, or light output per unit of input power. Air conditioners have SEER (seasonal energy efficiency ratio), expressed in BTU per watt-hour, which is the average amount of cooling provided per unit of electrical energy used. Heat pumps in heating mode have a similar rating called HSPF (heating seasonal performance factor).

The words “conservation” and “waste” can be a little confusing. “Conservation of energy” takes us back to the first law of thermodynamics, and “waste” is related to the second law, but you can also conserve or waste energy in a behavioral sense. Some may describe conservation as a sacrifice of convenience, comfort or time. Maybe you ride your bike instead of drive to work even in the rain, leave the air conditioner off even if you’re hot or take a moment to turn off the lights when you leave a room. I like to describe behavioral energy waste as energy you paid for but didn’t use for anything: leaving ceiling fans on in a closed restaurant, idling a parked car or letting the hot water run in the kitchen sink. You can even waste energy efficiently if you leave an LED lightbulb on all day.