How to Time Your Power Usage to Save Energy and Money 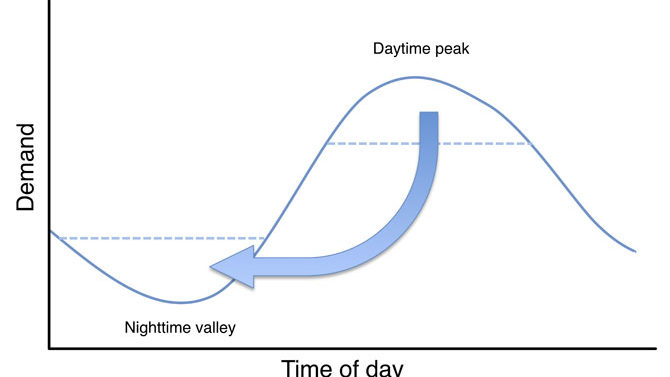 I occasionally hear people comment that they do laundry or run their dishwasher at night because “electricity is more expensive during the day.” When I was a kid in the ‘70s and ‘80s, my parents said the same thing. It turns out they were partly right, but also partly wrong.

It is usually more expensive for electric utilities to generate power during periods of high demand on the grid, which here tend to be summer weekday afternoons. This is because they must fire up more “peaking” plants to meet these short-term spikes. Peaking plants have the advantage of agility: They can be turned on and ramped up quickly. But because they don’t run all day and year-round like baseload plants, it is not cost-effective to install efficiency measures and environmental controls. In short, they’re flexible but expensive and dirty.

Until only a few years ago, electric meters were electro-mechanical devices with analog displays. In order to know when you were using electricity, they would need a built-in clock with a switch to change between on- and off-peak kilowatt-hour counters. Such meters existed, but were mostly only used for larger commercial and industrial customers where the extra cost and complexity of the meter was justified by the amount of revenue. For residential customers, it was simpler to charge an average rate for the total monthly usage, where people whose off-peak usage patterns subsidized people who would blast the AC all afternoon.

Even now, with highly capable digital smart meters, most Georgia residential customers pay a dumb rate that does not reflect when electricity is used. But Georgia Power and Jackson EMC offer time of use (TOU) rates that—for proactive customers who are willing and able to shift energy usage to mornings, nights and weekends during June through September—can bring down their average cost for electricity while helping to reduce peak demands on the grid.

Georgia Power residential customers who want to go a step further can opt into the Smart Usage rate. With this rate, not only is it advantageous to avoid electricity usage during peak hours, but you are also rewarded with lower costs for not running multiple devices at the same time (or penalized for doing the opposite).

In my last column, I explained the difference between power and energy. Energy is the quantity that you’re billed for at the end of the month; power is how fast the energy is flowing at a given moment. If you use a huge amount of power for a short period of time, the utility needs to have enough generating capacity available to meet that demand. If enough people do that, it means that they need to build more generating capacity, which they don’t like to do. It’s like paying to have enough bartenders on shift just in case everyone needs a fresh drink at the same time.

The Smart Usage rate splits your bill into two components: energy (kilowatt-hours) and peak demand (kilowatts). Energy use between 2–7 p.m. on summer weekdays is charged at the on-peak (higher) rate, and all other energy use is charged at the off-peak rate. Utilities typically measure average power consumption in 30-minute blocks, and the highest 30-minute average recorded during a monthly billing period is called the “peak demand.”

This has been commonplace for commercial and industrial customers for a long time, but only recently has it been applied to residential customers. Peak demand is measured around the clock, year-round. So, you shouldn’t just shift all of your usage to the nighttime; you need to, say, do laundry one night and run the dishwasher the next. And if you have electric hot water, you should time your showers carefully.

There are already smart appliances available that can talk to each other, your thermostat and your power meter. Soon, you’ll have a washing machine that you can program to start after the electric rate goes down, a water heater that will set itself back while you’re cooking dinner and a refrigerator that can run its compressor on an opposite cycle from the air conditioner. Now you know why that’s important.