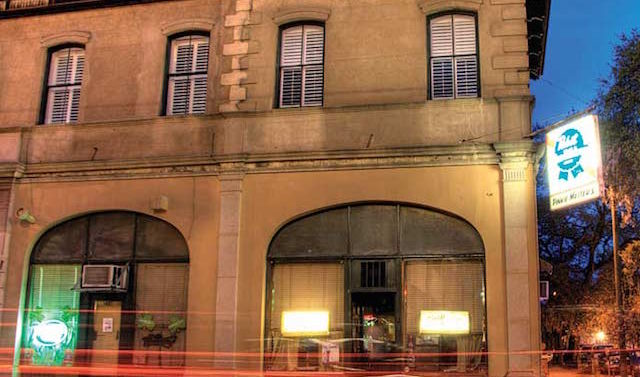 From one of my favorite cities, Savannah, comes the sad news that Pinkie Master’s Lounge will close at the end of the year. The closing is apparently the result of a real estate dispute between the current operator and the owner of the building where Pinkie’s has been dispensing Pabst Blue Ribbon and assorted other beverages for more than 60 years.

It is one of those bars that has always been a destination spot for Georgia politicians and the reporters who write about them. Jimmy Carter visited Pinkie’s when he was a state senator and governor, and legend has it that he climbed up on the bar to make an early announcement of his run for president. “The first time I came in here I had no support,” Carter recalled during a 2002 visit. “I’d come in here and Pinkie would close the bar; well, I don’t know if he closed, but he’d shut the door and mimeograph signs and fliers. Everybody was mooching beer off Pinkie.”

I first encountered Pinkie’s as a young reporter back in 1977 when I drove to Savannah to work on a St. Patrick’s Day feature story. St. Patrick’s Day is a very big deal in Savannah, and Pinkie’s was one of those watering holes at the center of the festivities.

The man for whom the bar was named, Luis “Pinkie Masters” Masterpolis, had been stricken with cancer, and it appeared this would be the last St. Patrick’s Day he would see. In fact, he did pass away later that year.

Pinkie greeted us at the bar wearing a sailor’s cap with the brim pulled down to hide the fact that his hair had fallen out from cancer treatments. We talked until the wee hours about people he had known, and I’m sure some distilled spirits were consumed during the process.

When I visited Savannah in the years since, I would try to stop by Pinkie’s and have a beer or two to celebrate his memory. I was pleasantly surprised to find that the lounge looked exactly the same every time—the same photos on the wall, the same dark atmosphere, probably the same dust on the booths.

The fact is, a lot of the political process happens in bars like Pinkie’s. Up-and-coming lawyers or political activists will sit in these bars with their friends and strategize about how they’re going to challenge some entrenched incumbent in the next election. Bars are also a favorite place for incumbents and challengers alike to hold fundraisers to squeeze out some contributions for that upcoming campaign. It will always be the case, as the old saying goes, that “money is the mother’s milk of politics.” A lot of that milk flows in the shadows of a local watering hole.

Bars can even produce the people who run for office. Manuel Maloof, the cranky Lebanese-American barkeep who ran Manuel’s Tavern in Atlanta until his death in 2004, used the bar as a home base to win elections as commission chairman and chief executive officer of DeKalb County.

Manuel’s spirit lives on with his saying still posted near the cash register: “Anybody don’t like this life is crazy.” You have to be crazy if you choose to hang out with politicians in bars, but you’ll have fun in the process and hear a lot of entertaining stories.

Pinkie’s most likely will shut its doors for the last time on Jan. 1, but I hope they can somehow find a way to keep it open for at least one more St. Patrick’s Day. I’m sure that Pinkie, wherever he may be now, would approve.