The Races for Governor and Senator Are Headed for Runoffs

It’s looking more and more possible that voters will have to return to the ballot box after the general election. The polls in the two major races, governor and senator, show the Republican and Democratic nominees running within a few points of each other. No one has been able to break away and crack through the 50 percent support level. That brings into play a provision of Georgia law that says a candidate doesn’t win unless he or she has a true majority—50 percent of the votes plus one.

If Gov. Nathan Deal or state Sen. Jason Carter can’t get to that point on Nov. 4, they’ll run again on Dec. 2.  Unless David Perdue or Michelle Nunn can achieve that magic number, they’ll slog through a nine-week Senate runoff campaign that won’t end until Jan. 6.

This situation is not new: There have been five statewide general election runoffs over the past 22 years. Each of them was caused by the presence of an obscure Libertarian candidate on the ballot who drew just enough votes to prevent one of the top two contenders from getting a true majority.

In the 1992 Senate race, Democratic incumbent Wyche Fowler was trying for a second term against Republican Paul Coverdell. Fowler lead Coverdell by more than 35,000 votes in the general election, but the Libertarian candidate forced a runoff where Coverdell beat Fowler. In that same year, Republican Bobby Baker ran against Democrat John Frank Collins for a Public Service Commission seat. Baker edged Collins by more than 14,000 votes, but the Libertarian candidate pushed it into a runoff where Baker extended his margin and won the first of three terms on the PSC.

The next runoff in 2006 involved another PSC incumbent, Democrat David Burgess, running against Republican Chuck Eaton. Burgess had a lead of more than 53,000 votes over Eaton, but a runoff was forced by the Libertarian candidate. Eaton squeaked by Burgess in the runoff.

Republican Sen. Saxby Chambliss found himself in the same situation as Wyche Fowler when he ran for reelection in 2008. Chambliss pulled 49.8 percent of the vote against Jim Martin and came within 9,000 votes of winning without a runoff. Libertarian Allen Buckley, however, won 3.4 percent of the vote and sent the race into overtime, where Chambliss crushed Martin by more than 300,000 votes.

There was another runoff in a 2008 PSC race that was forced by the Libertarian candidate. Democrat Jim Powell finished first in the general election by 64,000 votes over Republican Lauren “Bubba” McDonald but lost to McDonald in the runoff.

There are Libertarians running this year in both of the major races—Andrew Hunt for governor and Amanda Swafford for Senate—and they have the potential to do the same thing their party colleagues did in earlier elections. Hunt and Swafford have drawn a level of support ranging from 3–7 percent. Those percentages could drop as we get closer to election day, but probably not by much. Since 1990, every Libertarian candidate running for a statewide constitutional office has attracted at least 2.1 percent of the vote. With races as close as these, 2 or 3 percent of the vote going to a third-party candidate could be enough to keep everyone short of 50 percent.

In three of the five elections that went to runoffs, the Democratic candidate finished first in the general election but was undone in the second round. Every runoff saw a decrease in the number of ballots cast, but white voters returned to the polls in larger percentages than black voters. Those turnout trends could be the winning factor for Deal and Perdue. Even if they do have to go back and campaign in a runoff, history would appear to be on their side. 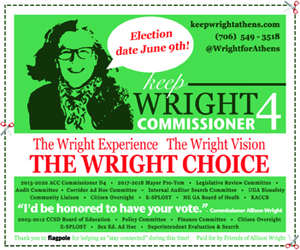