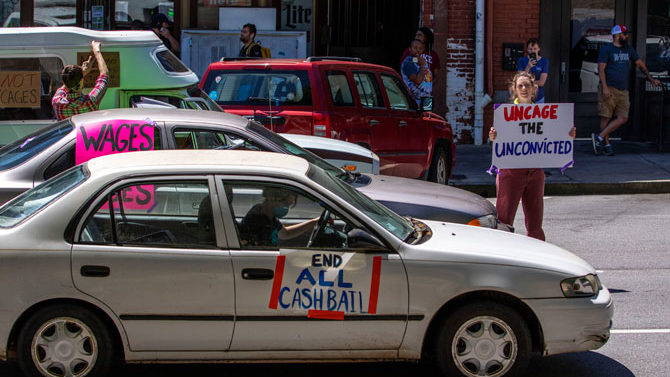 Around the world, jails are a hotspot for the COVID-19 epidemic. As a PhD student at UGA with a master’s in public health from the University of California-Berkeley, I am very concerned about our community members living in the ACC jail.

With over 240 people still in our jail, an outbreak there would overwhelm the capacity of our multi-county health district. The World Health Organization has openly declared this threat, and jails across the country are de-carcerating. I urge our mayor, commissioners, judges, sheriff and police to work together to provide “Care, Not Cages” and to protect public health.

Here in Georgia, we are already seeing the risk of outbreaks. The Georgia Department of Corrections reports 104 cases among employees and 250 among inmates in state facilities, not including county jails. One employee and six inmates have already died. Given the lack of testing to identify asymptomatic cases, the issue is assuredly more widespread.

With years of experience working with homeless, food-insecure and HIV-positive communities, I have repeatedly seen how medically, economically and socially vulnerable communities are more likely to fill our jails. Of those currently in the ACC jail, 85% are pre-trial, meaning they have not been convicted of a crime. Of those pre-trial detainees, 70% are African-American men. Twenty-seven have been incarcerated for over a year without a trial. One inmate with mental illness has been incarcerated without trial since 2012.

Our local jail is not responding adequately to this threat. After six weeks of repeated calls and emails, the sheriff’s department has no public report. According to an email exchange with Jimps Cole, chief deputy of the Clarke County Sheriff’s Office, current precautions include testing all those with symptoms. However, this policy does not account for the fact that COVID-19 is most contagious in the days before symptoms show. While Cole expressed that inmates are provided with masks, Courtwatch notes show that, until last week, half of inmates testifying before a judge did not have masks.

Furthermore, the testimonies of recently incarcerated people, taken under oath and recorded by Athens Courtwatch, show that jail conditions remain dangerous. On Apr. 17, a woman with pre-existing conditions at high risk for COVID-19 mortality was “quarantined” in a room containing four beds, exposing her to seven different people over five days. The judge released her to await trial at home without bail, but her experience shows how a short jail visit could be a death sentence.

This woman’s story is not rare: Infection control within jails is challenging even without a pandemic. Those currently incarcerated in the ACC jail include an 84-year-old man and at least four others over 55 years of age. Online jail records do not report the number of people with pre-existing conditions, but decades of public health studies show that incarcerated people have a higher prevalence of HIV, hepatitis B and C, tuberculosis and more. While incarcerated, they are at a higher risk of exposure to new infections and, when released, may bring these back into their communities.

It is essential that the sheriff, police and judges take action to reduce such risks. An epidemiological study commissioned by the American Civil Liberties Union reports that, across the U.S., “we can save as many as 23,000 people in jail and 76,000 in the broader community if we stop arrests for all but the most serious offenses and double the rate of release for those already detained.” For those very few who would remain in jail, the sheriff should have to publish a report, vetted by public health officials, describing their facility’s precautions for handling and treating COVID-19.

Most importantly, our community needs resources to support those released and to prevent the conditions that lead people to be incarcerated. The Athens-Clarke County Commission’s “Resiliency Package” provides just this opportunity to house, feed and care for the homeless, mentally ill, addicted and food insecure neighbors in our county. We also cannot ignore the fact that domestic violence is on the rise, contributing to incarceration. The commission must acknowledge the urgent need for violence prevention programs and survivor support services.

Our society will be judged by how it treats its most vulnerable during this crisis, and we all bear this burden.