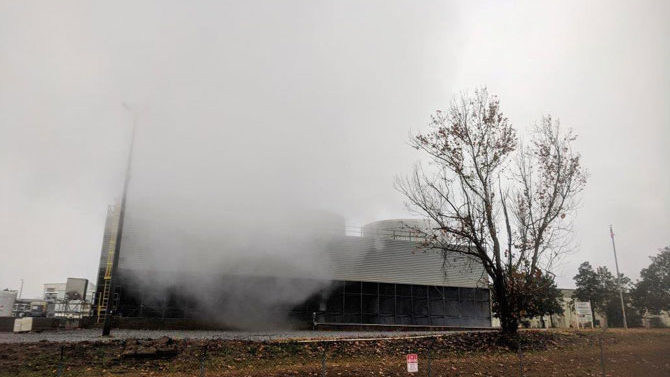 “Your actions speak so loudly, I cannot hear what you are saying.” — Ralph Waldo Emerson

If Emerson were living in our neck of the woods these days, I am confident he would repeat those words about Georgia Renewable Power (GRP) plant’s early track record in Madison County. Maybe, just maybe, the biomass energy plant can recover its reputation. But burning sooty creosote crossties in Colbert has decreased those odds. GRP’s Carnesville plant, in its early stages, is getting some environmental pushback, too.

I don’t live in Madison County or Franklin County, but I can stand in our Oglethorpe County yard and see the black smoke, hear the clanging and smell the creosote in the air. And at night—when I look past the mule barn—I see more than the customary stars twinkling in the black velvet sky. There is the big city, bright white glow of multi-storied GRP in Colbert. On Dec. 5, when I returned from the Madison County Clean Power Coalition’s town hall meeting in Danielsville, I was greeted by the dangerous odor just described by scientific experts.

Two Saturdays earlier, I got a more potent sniff. After picking up supplies from the feed store in Colbert, I drove next door to get a closer view of GRP. I wanted to see the much-talked-about mountain of railroad ties. The street talk was spot on. There the ties were, thousands of them, stacked and ready to be chipped for the fire.

It was the kind of day marked by dreary, low hanging clouds. At first, I thought it was fog over the asphalt road. As I drove through creosote laced smoke, my nose and throat told me otherwise. I coughed all the way back to the farm. The experience left me with a bad taste in my mouth—two ways. Creosote is repugnant to your taste buds. An industry burning wood pumped full of toxic materials tastes bad ethically, too.

If you or I made a backyard bonfire of creosote crossties, we could expect the long arm of the law to knock on our doors. In GRP’s defense, it cites an Environmental Protection Agency 2016 rules shift that allows industries to operate by a different standard. If you follow the money behind the change, you’ll discover public-be-damned industrial lobbyists behind the scenes.

As the meeting at Madison County High School droned on, I had to leave. But I had heard enough to make me wonder why GRP would risk the public uprising evidenced in the school’s cafeteria and the recent rip tide of letters to the editor. Again, I kept thinking: “Follow the money. Follow the money.” And that thought was punctuated by what Norman Vincent Peale once pointed out: “There’s no right way to do a wrong thing.” So, how does GRP defend its crosstie-burning logic?

I understand why Madison and Franklin counties would want new industry and a broadened tax base. Jobs are vital to the economic health of every community. I’m sure, in the beginning, that’s what drove both sets of leaders to go pro-biomass burning. Now, you have to wonder whether this is a classic bait-and-switch scheme, where one thing was ballyhooed and another thing was delivered. A Madison County friend said that he was told the only emissions would be fast dissipating steam. He said, “We were hoodooed.”

I’ve read GRP’s published we-want-to-be-a-good-corporate-citizen message in The Madison County Journal. I’d like to believe that. I really would. But propped on our pasture’s fence and looking at the black smoke belching from three miles away, I can hear the spirit of Ralph Waldo Emerson whispering into my ear.