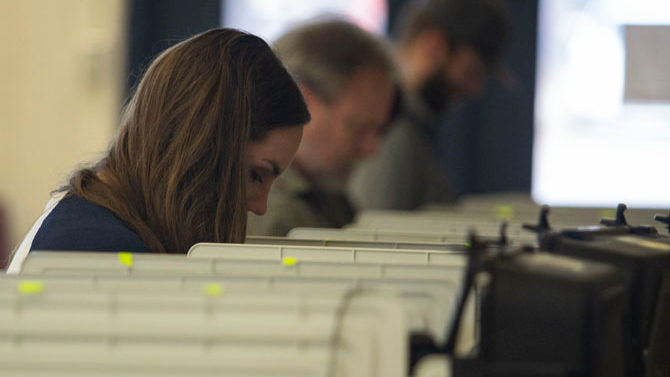 Not all Georgians know what has happened since 2018, when the entire nation learned about our old voting-system vulnerabilities. The news from Atlanta is that Gov. Brian Kemp and his replacement as secretary of state, Brad Raffensperger, have requested $150 million from the legislature to purchase a new system for Georgia’s 7 million registered voters. Why are both pushing hard for an expensive touch-screen, ballot-marking device (BMD) system that cybersecurity experts say will not prevent hacking and malicious election mischief?

Both are aware that a recent Atlanta Journal-Constitution poll showed a majority of Georgians prefer a hand-marked paper ballot system costing an estimated $50 million. All voters in the state should be aware of two pieces of this voting machine puzzle. An aware electorate can better inform Georgia legislators what is expected of them insofar as a new system is concerned.

BMD voters use a touch screen to physically enter vote choices. The machine prints a paper receipt for your approval. It contains two versions of the same information: a barcode or a Quick Response Code (codes like those on smartphone screens). This code is where your vote is actually encrypted. The printout also provides a written list of the candidates for whom you voted. If the printout is accurate, a poll worker optically scans the paper and records the vote embedded in the bar code. If the printout is inaccurate, it is destroyed, and you revote. The issue with BMDs is that the barcode isn’t human-readable. Can anyone be sure that both forms of information on the printout are identical? Barcodes can be hacked.

Hand-marked ballot systems print an individual paper ballot on demand, similar to what Georgia’s old 2002 system did when it loaded your personal voting options on a yellow plastic card that you fed into a touch-screen machine. But rather than use a total machine interface that is nothing more than a big black box you know nothing about, paper ballots are filled out by hand. Then the voter simply feeds the paper ballot into a scanner that determines voter intent and records the vote. The paper ballot is retained for audit purposes.

Citizens overwhelmingly favor paper ballots over still-hackable and considerably more expensive BMDs. The dangers inherent in using touch-screen BMDs will not restore faith in the voting process. BMDs will inevitably give rise to the very problem the SAFE Commission was formed to avoid in the first place.

The commission recommended the state proceed with a touch-screen BMD for our next voting system. This recommendation should be of interest to every Georgian who understands that our democratic form of government, messy as it can sometimes be, has at its foundation our full faith in our voting system. The only cybersecurity expert on the commission warned repeatedly that hand-marked paper ballots read by an optical scanner represented the safest and most reliable voting technology.

The National Academies of Sciences, Engineering and Medicine recommend that all states adopt paper ballots. The lead program director for the National Science Foundation’s Secure and Trustworthy Cyberspace Program, the nation’s fundamental cybersecurity unit, says ignoring an attack surface that can be put into any computer system—even one as simple as a QR code—imperils the system. Experts caution that if there is anything of value in a system (a vote), somebody is going to try to hack it. And on Jan. 29, this country’s security experts testified before Congress that Russia will be up to no good again in 2020.

Who could benefit from a pricey BMD system? On Jan. 22, Sue Halpern published a piece in The New Yorker exposing the overt lobbying efforts and cozy relationships going back to 2002 between voting-machine manufacturers and Georgia’s elected officials. Google it. Halpern’s article should be required reading for every Georgian who cares about fairness, honesty and openness. She examines Election Systems & Software (ES&S), the largest voting-machine manufacturer in the U.S., and the system once known as Diebold when it manufactured Georgia’s infamous 2002 system.

Here are two of Halpern’s eye-opening facts regarding past and present players in Georgia’s elections/voting machines game: Kathy Rogers, ES&S’s current senior vice-president for governmental affairs, was Georgia’s elections director in the Secretary of State’s office in 2006 when she opposed a bill requiring a verifiable paper record for each ballot cast. Former state Rep. Charles Harper, a registered lobbyist and legislative director for Kemp’s former office through the end of 2017, then an ES&S lobbyist through June 2018, is Gov. Kemp’s new deputy chief of staff.

There is much more in the article. Halpern names the who. The why you must determine for yourself. These revolving-door relationships between officials and voting-machine company representatives have gone unchallenged and must be exposed before our legislators authorize the purchase of a new voting system.

Hand-marked paper ballots are not a perfect solution, but they do represent the will of the people and have the strong backing of cybersecurity experts. Democracy thrives when we place our full faith in the integrity of the ballot. Our elected officials must be transparent about how they protect that faith. Much is expected of Georgia’s new leaders. Citizens, learn the facts. Use your voice. Leaders, we demand a secure, unhackable, paper-ballot voting system.