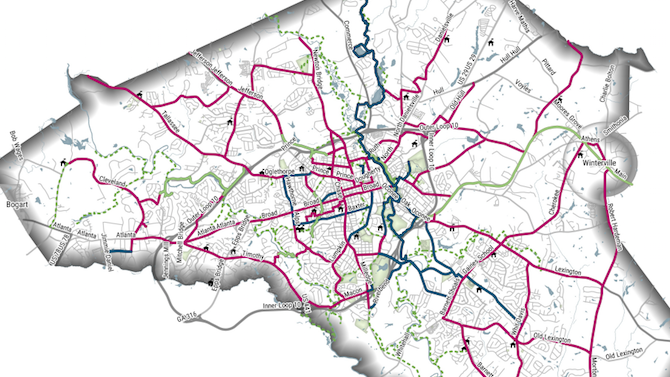 Athens has a reputation for leaving studies on the shelf to gather dust. Change is difficult—we get it—but it sometimes seems like we’re searching for reasons to not take action. At Complete Streets Athens, we’ve had numerous discussions about how to identify and relieve some of the pressures that impede action. With the impending vote on the Athens in Motion bike/pedestrian plan, it’s time to examine why we consistently fail to act.

Part of the problem lies in the power afforded the loudest “no”s, frequently coming from those with political pull, who often did not participate in the public process. That lack of participation may be due to a lack of effective public outreach or even to inconsistent notification mechanisms, but as often as not, it is due to an inability or unwillingness to engage in the process. It’s time we get past these roadblocks and start acting on the efforts and investment of our citizens, staff and county government.

Let’s use the current Chase Street proposal as an example. The result of Athens’ first true Complete Streets analysis, the proposal leaves Chase Street as primarily auto-centric, though with improved flow for drivers and additional sidewalks, while diverting bike traffic to streets where there is room to incorporate safe, comfortable bike lanes and paths. As importantly, the Boulevard and Oneta Street bike lanes and the multi-use path on Barber Street would establish precedent for the Complete Streets philosophy of using the right solutions on the right road, as well as signalling ACC’s willingness to work towards a countywide system of connected bike lanes and paths.

Rather than applauding these game-changing, innovative projects that embrace Complete Streets design standards more than any we have seen before, we’re quibbling over minor points in a conceptual plan and/or sympathizing with those who either said they disapprove of bike lanes on Boulevard or they were not notified that the project had progressed to the mayor and commission’s agenda.

While the Barnett Shoals protected bike lane was relatively recently introduced, the Chase Street project is in its fourth year. For Chase Street, over the last two years there have been public meetings, one-on-one interviews and drop-in sessions to gauge interest in conceptual designs and again to gather feedback on final recommendations, all before the project was handed off to the mayor and commission. At what point is it the responsibility of the community to keep informed as the public process unfolds?

For years, in study after study, in survey after survey, in plan after plan, Athenians have repeatedly and consistently asked their government to provide safer and more comfortable places to walk and bike. The Chase Street and Barnett Shoals projects are perfect examples of projects that would do just that. They both consider areas holistically, instead of sections of road, and are representative of the type of projects that will be needed to complete the Athens in Motion objectives. Both projects demonstrate that we’re actually (finally) engaged in long-term planning to increase connectivity throughout the county.

• A robust project evaluation system that prioritizes equitable distribution of resources across the community.

• A dedicated bike/ped planner as a permanent staff position.

Numerous studies prove that building roads for people—offering safe, comfortable choices—increases economic opportunities, increases property values, makes driving less stressful and, most importantly, reduces deaths and serious injury to people walking and biking. We have an opportunity to move towards this new mentality with the Chase Street and Barnett Shoals bike/ped projects.

The Athens in Motion bike/pedestrian master plan offers a watershed moment to change the mindset for transportation projects in Athens-Clarke County. Its development was an exemplary transparent process, with numerous non-traditional outreach efforts to be as inclusive of the public as possible. With adoption of the bike/pedestrian master plan and its template for community outreach, our transportation default position should move towards the incorporation of bike/ped infrastructure to increase safety and comfort at every opportunity. Any objections to such projects should be rooted in safety and addressed on a case-by-case basis with data-driven evidence and analysis.

It is nice to see all the thanks the Athens In Motion citizens committee has received from ACC elected officials, staff and Toole Design Group consultants for their two years of volunteer service. At Complete Streets Athens, we’d rather see their work honored by following not only physical implementation and policy proposals, but adoption of projects like Chase Street and Barnett Shoals, both of which will help make this new mindset a reality and keep this and future studies from gathering dust.