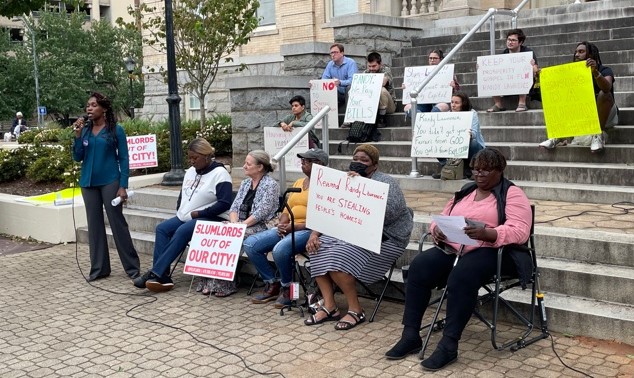 State House of Representatives candidate Mokah Jasmine Johnson and allies held a press conference and rally at City Hall Sept. 30, ostensibly to call on state legislators to lift a statewide ban on rent control, but instead spending more time railing against the Athens-Clarke County Mayor and Commission for not defying state law and providing more assistance to displaced residents.

“We need our local officials to step up,” Johnson said after recounting a period of time she spent living at a motel and later in her car. She had lost her housing because an injury forced her to miss a few weeks of work, she said.

Kathryn Titus lives in Highland Park, a rental neighborhood recently bought by a Florida-based real estate investment firm that has drastically raised rents and stopped accepting Section 8 housing vouchers at a number of communities in Athens. She said the ACC government should create a multi-million-dollar fund to assist those residents, flouting the Georgia Constitution’s “gratuities clause,” which prevents the government from giving cash directly to individuals. “You have to disrupt and defy, or it’s never going to be fixed,” Titus said.

When asked specifically about the rent control bill, Johnson’s campaign manager, Imani Scott-Blackwell, said Johnson wants to lift the state ban so that cities can experiment with what works best for them. “We just have to test it,” Scott-Blackwell said.

For some of the Highland Park and Lexington Heights residents who spoke at Johnson’s rally, any assistance will come too late. Lisa Walker said she was supposed to vacate her apartment that day and did not know where she would go. She is on Section 8—which landlords are not obligated to accept under Georgia’s Fair Housing Acts—and has a criminal record that she said makes it difficult to obtain housing. Audrey McInnis also said she’s had a hard time finding new housing because arthritis stemming from a knee injury rendered her disabled, while most of her husband’s income goes toward health insurance; they’ll be forced to stay with a relative for now. Titus said she’s turning over 89% of her monthly Social Security check to Prosperity Capital Partners and its management company while trying to support two grandchildren she adopted.

“They get the money, and they look down on us,” said Lexington Heights resident Barbara Daniel.

As Johnson had warned earlier, anyone who gets sick and misses a couple of paychecks could find themselves in the same situation. “It [the affordable housing crisis] might not impact you today, but it will impact you some day, some way,” she said.

Following the rally, several demonstrators marched to Mayor Kelly Girtz’s house. Ironically, Girtz said he was at a meeting with the Inclusionary Housing Task Force when he heard he had visitors. Girtz said he drove home and spoke with them outside a nearby church.