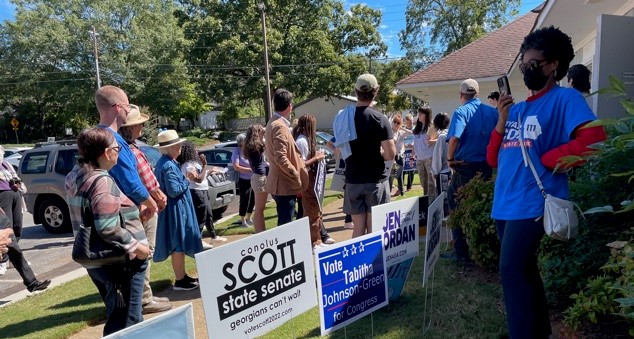 Athens Democrats opened a campaign headquarters on Sunset Drive Oct. 1 with speeches from local candidates before a few dozen candidates fanned out to knock on voters’ doors.

While Democrats have two strong candidates at the top of the ticket in U.S. Sen. Raphael Warnock and Stacey Abrams, they’re concerned that voters may not make it all the way down the ballot to races for lower-profile statewide offices, Congress and the state legislature. “We can’t get it done unless you vote down-ballot,” said Conolus Scott, a Madison County court bailiff who’s running against state Sen. Frank Ginn (R-Danielsville).

Three-time 10th Congressional District candidate Tabitha Johnson-Green emphasized the importance of old-fashioned shoe-leather campaigning. “No one is going to work harder than me,” said Johnson-Green. “I’ve got the shoes with the miles and the worn-out shoes to prove it.”

Although distinct underdogs based on the new districts’ demographics and the incumbents’ campaign fundraising advantages, Democrats hope they can pull off upsets by running on popular issues like health care and education, and against Republicans’ stance on abortion. “This is the party for everyone who believes government can provide a hand up instead of a boot on the throat,” Auerbach said.

Ghosts of Athens and Beyond: A Haunted History of North Georgia

Calendar Pick: ‘Visions From the Outside’ Reception