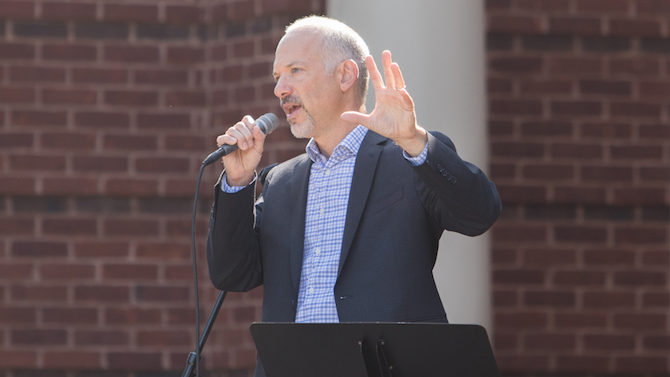 Gov. Brian Kemp lifted the statewide shelter-in-place order effective May 1, even as hundreds of new COVID-19 cases are being reported daily, and Mayor Kelly Girtz and medical professionals warned that Georgia is not out of the woods yet.

The shelter-in-place order restricting travel except for essential business has been in place since Apr. 3. Last week, Kemp allowed certain businesses—including nail and hair salons, tattoo parlors and bowling alleys—to reopen, and restaurants could reopen their dining rooms starting Monday, although many have chosen not to do so. May 1, he extended safety guidelines for reopened businesses, such as requirements that employees wear protective gear and limit capacity, through May 13. He also ordered the elderly and “medically fragile” people to stay at home through June 12.

“What we’ve done has worked,” Kemp told the AJC. “It’s given us time to build our hospital infrastructure capacity, get ventilators and ramp up testing. That’s what really drove our decision.”

Hospitals may be on a better footing now, but testing remains sporadic, and Georgia has not seen a decline in new COVID-19 cases, although there is some indication they have plateaued. The state Department of Public Health reported 999 positive tests and 24 deaths on Saturday, bringing the total cases in Georgia to about 27,000, with nearly 1,200 deaths.

“Gov. Kemp’s recent actions were not informed by science, and they put both our health and our economy at risk,” Rebecca Mitchell, an Emory University epidemiology professor who’s running as a Democrat for a state House seat in Gwinnett County, said during a virtual news conference arranged by Protect Our Care, a group pushing for Medicaid expansion. “We need to be clear that a strong and safe Georgia depends on leaders who will prioritize public health and frontline workers,” Mitchell said. “Our goal should not be simply staying below the maximum capacity of our health care system, because by placing that bar that low, we’re asking that entire system to work at maximum capacity for an entire year, and that’s an extremely large ask.”

While Kemp lifted the statewide shelter-in-place order, he is not allowing local governments to re-institute their own. Athens-Clarke County Mayor Kelly Girtz—who also criticized Kemp’s earlier decision to let some businesses reopen—said he is worried about the message Kemp is sending by lifting the state order.

“If it’s, ‘The crisis is over, and we’re safe now,’ that’s dangerous, because it’s not over, and we’re not safe,” Girtz said. He said that Kemp should have provided clear metrics and specific measures they would trigger, such as allowing nonessential businesses like dress shops to do curbside pickup, then letting them open to limited numbers of people wearing masks.

On the bright side, Girtz gave an interview from the parking lot of the Kroger on Highway 29, and reported that customers from several counties were practicing social distancing.

“People have actually gotten increasingly good about wearing masks in the store,” he said.

No COVID-19 cases have been reported at the Clarke County Jail, but other jails and prisons across the country have become hotspots for coronavirus. Efforts are underway to release nonviolent offenders and people who are awaiting trial from the Clarke County Jail to avoid exposing them in case of an outbreak.

As of Apr. 28, there were 252 people in the county jail, according to Commissioner Mariah Parker. Judges have released a total of 530 by altering the terms of their bail since the state Supreme Court declared a judicial emergency on Mar. 13, putting a halt to most proceedings except bond hearings. Parker also said she is working on a resolution in support of releasing more inmates from jail, although that did not appear on the commission’s agenda for its May 5 voting meeting.

By the following day, April 29—when Girtz live-streamed his weekly “community conversation” on coronavirus-related issues—the number of jail inmates had fallen to around 220. Two months ago, that figure was 375, he said, and 10 years ago it was 550. The jail’s capacity is 750, so the low population gives the remaining inmates more room for social distancing.

“We’re seen a dramatic reduction,” Girtz said. “And I do want to note… we have not seen a spike in crime during the COVID pandemic. If anything, we’ve seen a modest reduction in crime.” Commercial burglaries are up slightly, but residential burglaries are down dramatically, he said—perhaps because, while many businesses are shuttered, many people are staying home nearly 24-7.

Girtz said he has offered court officials resources for monitoring and case management “so that every individual who reasonably could be released, would be.”

For more on the jail issue, see this Comment.

The University of Georgia plans to resume classes on campus this fall, President Jere Morehead said in a message today to students, faculty and staff.

“We are anticipating a resumption of in-person instruction for the Fall Semester beginning in August 2020 for all USG institutions,” Morehead said. “However, I would emphasize that this situation remains a fluid one, as the USG monitors developments related to COVID-19 and receives counsel from state public health officials. Guidance could be subject to change, even after our plans are put in place. We will need to remain flexible and patient as we move forward.”

UGA has been closed since spring break in mid-March due to the coronavirus pandemic, with students taking classes online and most employees working from home. Earlier this month, the university rescheduled spring commencement ceremonies for next fall. Maymester and summer classes will also be online.

Separately, Morehead told WGAU radio that he is optimistic about the 2020 college football season—with fans in attendance.

Accreditation agency Cognia has changed the Clarke County School District’s status from “accredited” to “accredited under review” after looking into allegations of school board members micromanaging made by then-superintendent Demond Means last year.

Thomas said in a news release that the change in status will not affect graduating seniors, nor does she anticipate it affecting future graduates, since the district is committed to addressing Cognia’s directives. “The report provides specific tasks the district can take to resolve issues and improve effectiveness. We will immediately work with the Board of Education on improvement measures and documenting changes, with the full expectation of meeting the December 2020 timeframe and having full accreditation status reinstated,” Thomas said.

• Board members are not well-versed in Robert’s Rules of Order governing how meetings are run, and sometimes violate policy by placing items on the agenda without enough advance notice. They sometimes seem unfamiliar with agenda items, as if they haven’t read materials beforehand. Work sessions are “chaotic,” and questions that should be asked during work sessions aren’t, so voting meetings are not “efficient.”

• Board members are unfamiliar with and do not always adhere to CCSD’s ethics policy. They should undergo more training and regularly review policies, especially those related to ethics.

• Committee meetings may violate open meetings laws if board members who are not on the committee show up.

• Vague concerns about the influence of unnamed “special interest groups.”

• Data is abundant, but teachers are not always told how to use it.

“In addition to our ongoing training through the Georgia School Boards Association [GSBA], the members of the BOE embrace this opportunity to improve its effectiveness,” said board president LaKeisha Gantt. “We have begun work on our norms and are committed to policy review to maximize our performance as a governance board. We will accommodate and support all aspects of the review.”

Cognia representatives visited Athens in late January to interview Thomas, current and former board members, principals and cabinet-level administrators. They also visited Cedar Shoals High School, Coile Middle School and Barrow Elementary School, watched videos of school board meetings, and read agendas and minutes. They apparently did not interview Means, who asked Cognia in September to conduct an investigation, then was placed on paid leave in December after requesting to negotiate his exit. Nor does the report address Means’ specific allegations.