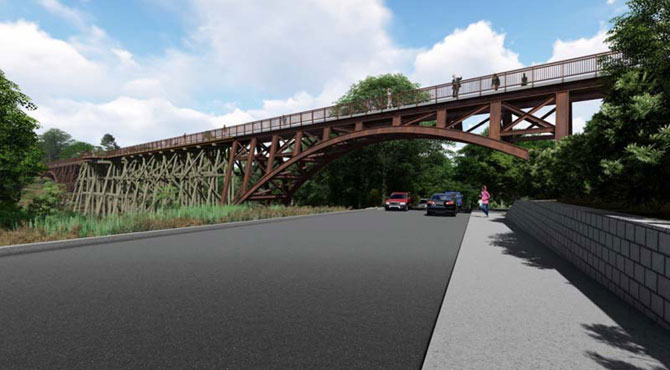 The Athens-Clarke County Commission voted last week to approve a preliminary design for a bridge over Trail Creek along the Firefly Trail. Under normal circumstances, you might expect a vote like this to be unanimous and end quickly, with little comment from the public. Not this time. Commissioners heard numerous public comments and debated the proposal for over 45 minutes before making their decision, with Jerry NeSmith, Melissa Link and Mariah Parker voting no.

This bridge design was contentious because of the historic trestle it will replace. The “Murmur Trestle” in Dudley Park was built in 1888 and was made famous in 1983 when it appeared on the back cover of the R.E.M. album Murmur. The trestle is a beloved monument of Athens music history, but unfortunately, then-owner CSX partially demolished it 20 years ago, and it’s become structurally unsound. That means engineers have had to think up other ways for pedestrians to safely cross the 500-foot gap across Trail Creek. The bridge design approved by commissioners includes part of the existing trestle, with a steel arch used for the remaining length. This will make the bridge stronger and easier to maintain while keeping at least some of the historic trestle. The design was supported by Historic Athens, but some commissioners and members of the public were unhappy with the decision and wanted to do more to preserve what remains of the trestle.

Speaking of Trail Creek, the commission officially renamed Trail Creek Park a couple of miles away for the late Virginia Walker, a longtime East Athens activist who helped funnel federal dollars and local investment to her long-neglected neighborhood, resulting in programs and facilities like the Athens Neighborhood Health Center, Triangle Plaza and Miriam Moore Community Center. She was the last of the “Four Matrons”—herself, Moore, Jessie Barnett and Evelyn Neely—when she died last year at age 72. The commission had previously considered naming the park for Walker, but some felt uncomfortable with bestowing the honor on a living person.

Debate continued over the details of the “prosperity package” as commissioners pushed back the vote on the Neighborhood Leaders program to December. The funding for this $4 million package, intended to fight poverty, was approved in June, but the decision on how to spend it has been delayed time and time again. With numerous work sessions ending in intense disagreements, even bickering, among commissioners, it seems unclear if the prosperity package will be finalized before budget talks begin again next year.

The Neighborhood Leaders program has been touted as a success by Tim Johnson, the executive director of Family Connection-Communities in Schools. But commissioners aren’t so much debating the merits of any one program as the nature of government assistance itself. Should help come in the form of a “handout” or a “hand up”? What would a government-directed “hand up” look like in Athens? After months of debate, these questions are still hanging in the air, with possibilities being discussed and then discarded one after another.

It’s possible the prosperity package will fail to become a reality in the current fiscal year. Even if that happens, fighting poverty in Athens was always going to be a marathon, not a sprint. If the idea of the package helped to spark a debate among commissioners that they would not have had otherwise, then perhaps it’s a success no matter what happens. This money can always be saved and spent in future years, after the debate about it has concluded. When that will be, it’s hard to say.

That wasn’t the only vote commissioners delayed at the Nov. 5 meeting. They also sent a proposal increasing the minimum drink price allowed in bars back to the Legislative Review Committee, chaired by Commissioner Allison Wright, even though the LRC vote to recommend raising the minimum from $1 to $2 was unanimous the first time around. Although recommended by a health study as a way to curb binge drinking and supported by police, the proposal was received coldly by the drinking public and by some commissioners who are not on the LRC.