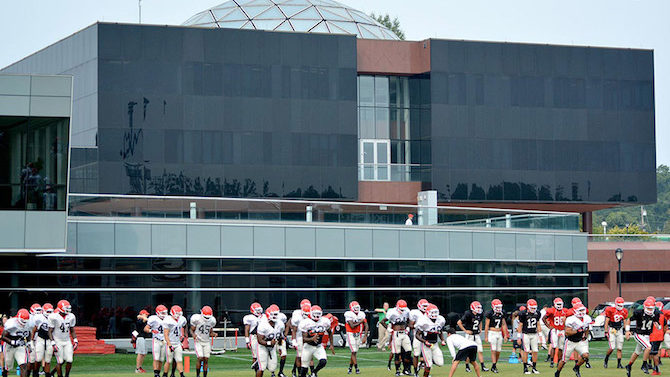 Outside the Georgia Center last week, about 50 University of Georgia students, union members and others gathered—confined to a pen, actually—to rally against a graduate student fee and bring other grievances to the University System Board of Regents meeting inside.

Justin Simpson of the United Campus Workers of Georgia likened the $450-a-semester fee to being forced to pay to work. (Grad students often teach classes in exchange for tuition and a small stipend.) “That isn’t necessarily cheap, given stagnant low stipends and the rising cost of living,” he said.

Other groups, such as the Economic Justice Coalition, the Athens Immigrant Rights Coalition and Athens for Everyone, joined in the protest. Sara Black noted that it’s been nine years since the Board of Regents passed its “racist, xenophobic policy” barring undocumented immigrants who grew up in Georgia from attending top competitive public universities, and requiring them to pay out-of-state tuition at others.

Simpson was unsuccessful at getting the fee put on the regents’ Oct. 15–16 agenda, but he was encouraged that finance staff agreed to meet with the union, and he’s hoping the fee will be eliminated in April, when the board is expected to approve a new budget for higher education.

Inside the campus hotel, the highlights came during a real estate committee meeting, where the committee passed through an $80 million addition to the Butts-Mehre building and a new $50 million dormitory.

The new dorm—on the site of the old Bolton Dining Commons, near existing dorms on Baxter Street—is an acknowledgement that freshman enrollment continues to tick up, from under 4,000 in 2000 to 5,500 this year. First-year students are required to live on campus, and overcrowding got so bad a couple of years ago that UGA was forced to put some up in hotels. The 575-bed dorm will also serve as “swing space” for future dorm renovations. UGA will contribute $10 million from housing reserves, with a private developer contributing the other $40 million.

The Butts-Mehre project—part of Georgia’s ongoing quest to overtake Alabama—consists of 140,000 square feet in two phases. It will include a new football locker room, sports medicine, training and nutrition facilities, office space, an auditorium for team meetings and other amenities. The UGA Athletic Association will pick up half the tab, with the rest coming from boosters’ donations.