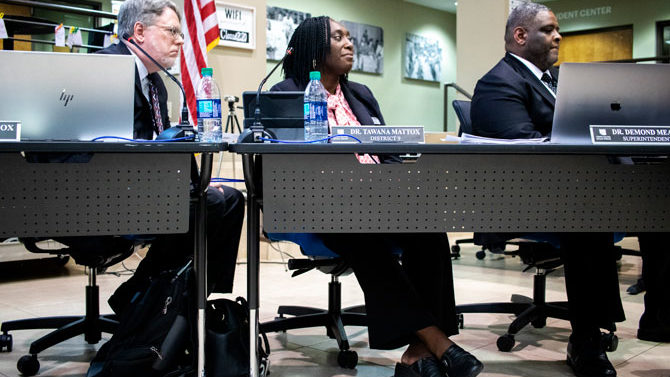 Clarke County School Superintendent Demond Means “implore[s]” AdvancED to intervene in the school district in response to a complaint filed with the accreditation agency last month, citing what he calls micromanagement on the part of several school board members. Those members pushed back, telling Flagpole that Means is twisting events and attempting to intimidate them for asking questions or offering advice.

In particular, Means targeted John Knox, Greg Davis and Tawana Mattox. Knox and Davis have at times voted against Means’ initiatives—as they did on the West Broad School last week—while Mattox has spoken openly about tension on the board and the lack of trust between board members and the superintendent (who are supposed to work as a team, per board regulations).

“The situations involving specific board members demonstrate that the current situation in the district is dire, and intervention from AdvancED is necessary to make significant and sustainable change in government protocol,” Means wrote in a draft of a letter dated Sept. 13 obtained by Flagpole. He distributed the draft to board members at the end of the marathon Sept. 12 board meeting, giving them one day to provide input.

Problems have been “compounded by special interest groups that have aggressively opposed” Means’ agenda of increasing achievement, closing racial achievement gaps and ensuring equity, he wrote. The board doesn’t want to be perceived as a “rubber stamp,” he wrote, which “has contributed to a culture of skepticism and distrust.”

Specific allegations leveled by Means include:

• Knox and Davis would not participate in a hearing to determine whether to let a teacher out of his or her contract because they had concerns about the process.

• Mattox wanted to reverse her vote to approve a personnel package that included a principal for Alps Road Elementary. (The candidate later withdrew.) She also asked questions about the hiring process, saying that she would prefer for CCSD to promote from within rather than hire out-of-town applicants, because she had heard that internal candidates are “blackballed.” While Mattox said repeatedly in emails that she was not trying to micromanage, Means responded that her questions constituted “an indirect form of micromanagement,” as did her “tendency to assume ill intent” and “need to challenge the administration.”

Mattox responded: “From the first day of being sworn into office, I never felt welcomed by the superintendent, and I observed early on my perception of a superintendent who feels he should not be held accountable or questioned on any subject.”

• As previously reported in Flagpole, Knox met with Means in April to discuss the potential fallout if Means fired an unnamed Eastside principal, after which Means contacted AdvancED to inquire about filing a formal complaint. Means called Knox “confrontational and aggressive.” Knox had a different recollection, telling fellow board members in a statement provided to Flagpole that he was trying to spare Means from public outcry if the principal was fired after numerous other principals had quit or been reassigned. “My primary intent in having the April 9, 2019 meeting with Dr. Means was to help him in his job—not to undermine, not to threaten and not to intimidate,” he wrote.

• The board unilaterally added to the criteria for evaluating the superintendent, and has not scheduled a hearing on a complaint Means filed on May 13 against Knox related to the April meeting.

• The board usurped the superintendent’s authority by voting last month to approve a resolution, introduced by Davis, authorizing board President LaKeisha Gantt to hire outside counsel to prepare a separate response to AdvancED. The resolution cited concerns that Means is not unbiased and would respond in a manner that threatens the district’s accreditation.

Davis noted that CCSD’s attorney, Michael Pruett, recommended passing the resolution and advised the board on its wording. “In my view, Dr. Means’ response to AdvancED is an attempt to intimidate the Clarke County school board,” Davis told Flagpole. “It may or may not work.”

In his response, Means wrote that he understands the potential ramifications of involving the accreditation agency. “However, I firmly believe that we have passed the point at which the board will engage in any meaningful change without the intervention of AdvancED.”

After consulting with school board members, Means added two paragraphs to his response explicitly stating that he doesn’t want to put CCSD’s accreditation at risk.

As for the outside counsel, Gantt told Flagpole that the board has not yet hired its own attorney and is considering revising the resolution to more closely reflect district policy.

“In my view, Dr. Means’ response to AdvancEd is an attempt to intimidate the Clarke County School Board.  It may or may not work.  Specifically, I am charged in his response with introducing a resolution on August 29, 2019 for the school board to retain legal counsel to ‘investigate and prepare a response to the complaints and allegations referred to in the Notice on behalf of the School District.’ Following my introduction of the resolution at the board meeting, School Board Attorney Michael Pruett said ‘this resolution that is exactly what we came here tonight to recommend.’  With that in mind the board preceded with a vote and the resolution passed.  Subsequently, in response to a Board President inquiry, Mr. Pruett gave additional guidance in a five page letter on how to reword the resolution to avoid any ambiguity. And yet, Dr. Means is now stating that by introducing the resolution, I was ‘seeking to grant the Board of Education the authority to usurp the authority of the Office of the Superintendent.’ If board members are not to listen to the school board attorneys then where does that leave us?”

“From the first day of being sworn into office, I never felt welcomed by the Superintendent, and I observed early on my perception of a Superintendent who feels he should not be held accountable, or questioned on any subject.  Please review all meetings, and I believe you will agree the questioning from the board to the Superintendent hasn’t been extreme. His body language, and aggressive tone made it difficult for me to feel comfortable that I could have a rational conversation of any sort due to the way I witnessed he responding to other board members. I continued to do my part in being friendly, and I have engaged with him on things and no way have I been intolerable.  I chose to communicate in writing [my] fear of this very thing after seeing my colleague being reported to the accreditation firm, and furthermore, the then chair and co-chair sign off on it rather than using that as a building moment and a teachable moment.  Since I arrived on the board, my experience has been intense, and I believe people are walking on eggshells, and out of my passion I have chosen on occasion to speak in a board meeting, or submit written concerns to the board.

“First and foremost, I care about the children’s achievement in the district. I am also a passionate person concerned about the poverty, and specifically, the upward mobility of people from Athens. I have always been a champion for hiring local, buying local, and presenting a fair playing field for people in this community.  We have had many resignations, and the hiring of new people have resulted in my perception that  non-Athenians in recent principal and central office hires are coming from other places. I wasn’t trying to micromanage, but to gain an understanding of the process for leadership since he is new versus the previous process, and to understand if there was a plan to bring our employees up to a place that matches his qualifications.  I have not advocated to do anything unethical but I have been concerned that our local staff are being sent a message that they are not good enough when people from Fulton, DeKalb, Gwinett, and other areas are commuting here while our dedicated employees of many years are constantly overlooked.  The specific complaint against me states ‘One board member threatened to rescind the appointment of a principal at Alps Road Elementary.’ I sent an email to the board to request an executive session to discuss my concerns about this position, and stated I wanted to call to rescind that vote due to lack of discussion, and concerns I had learned.  The second email, dated August 28, another person from Fulton County was hired in our central office. I discussed in my email to the board and superintendent that I am concerned that we are becoming heavily populated in our district with people from other places. We were promised exit interviews to determine why people are leaving, we were told that there was a leadership program that was going to be implemented, and principals not selected would be invited to attend. I wanted to know where we were in this process as I begin to be paranoid that positions of upward mobility were being taken up by persons outside of Athens.  I asked the attorney how to manage my concern, and he stated through policy, through a discussion with the superintendent and board president,  and maybe asking for a full discussion at a board meeting.  Again, I have been reluctant to speak with the Superintendent face to face due to his behavior change when you ask him about questions he simply does not want to be asked about.  I want to believe all processes are being followed.  I am a product of this community.  I want students to achieve, I want teachers to receive the resources and support they need including discipline support; I want people vested in the children of this community future to have the opportunity to advance.  I am saddened that we are here with this type of one-sided complaint to AdvancED.  I am open to them reviewing all facts.  I apologize to all of my babies in the Clarke County System that I am included in something that could directly impact accreditation.  I can’t apologize for asking questions.  For this purpose, I have limited questions to the concerns listed in the complaint, and I believe this is designed to intimidate me.  We are constantly told what we can’t ask but I am still new, and still figuring out how we are to vote on what we can’t ask more about.  I hope this complaint leads to a resolution where the Superintendent and me both look at our individual imperfections, and for the sake of the children, work through them, and move forward. I love serving on the board. I am going to keep my focus on the children.”