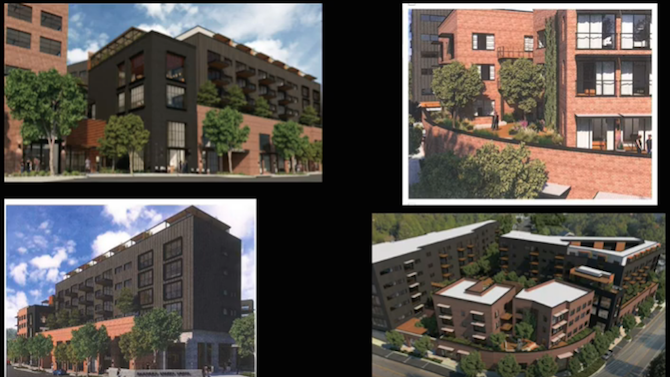 Commissioners look set to pass a new mixed-use development near downtown and campus at their Apr. 2 voting meeting.

The development at the intersection of Baldwin and Mitchell streets—on the current site of an older apartment complex and what used to be the Blind Pig—would consist of 156 studio and one- and two-bedroom apartments and about 18,000 square feet of ground-floor commercial space, including a cafe and a rooftop bar, in five interconnected buildings. That’s about 30 percent of what could be developed in commercial-downtown zones, according to Planning Director Brad Griffin.

“It’s not a mega-student housing project,” Brett Nave, principal architect at the local firm studio.bna, told commissioners at their Mar. 19 agenda-setting meeting. “It’s a project for anyone and everyone.” Tenants are likely to be young professionals, graduate students and a few undergrads, Nave said. (Most student-oriented apartment buildings have mostly four-bedroom, four-bath layouts.) He added that the developer is working with the Athens Land Trust to set aside some units as affordable housing, which Commissioner Mike Hamby said could serve as a model for future developments once the commission puts inclusionary zoning and a package of other affordable-housing incentives in place.

“I think it’s a brilliant design for that little island tucked between the railroad tracks and the roads,” said Commissioner Allison Wright, who represents the area. Commissioners Melissa Link, Andy Herod and NeSmith also praised the plans.

The developer, Athens-based Parker and Associates, is asking for a rezoning from commercial-general to commercial-downtown, as well as several waivers related to the site’s steep topography, Griffin said. The county planning commission unanimously recommended approving the plans.

On Tuesday, the commission will also vote on a request to tweak the zoning for a development at 141 E. Broad St. that’s been almost 40 years in the making. Residents of University Tower previously convinced county officials to put a 10-foot buffer in place between the condominium building and whatever is built in the parking lot next door. WALCO Investments, represented by local zoning lawyer Jim Warnes, is asking to remove the buffer on the first floor. It would remain in place for upper stories, as would a 50-foot height limit. The planning commission also unanimously recommended those changes.

That development is not to be confused with a new office building that’s set to go up in the Bank of America parking lot at the corner of Broad and Lumpkin streets.