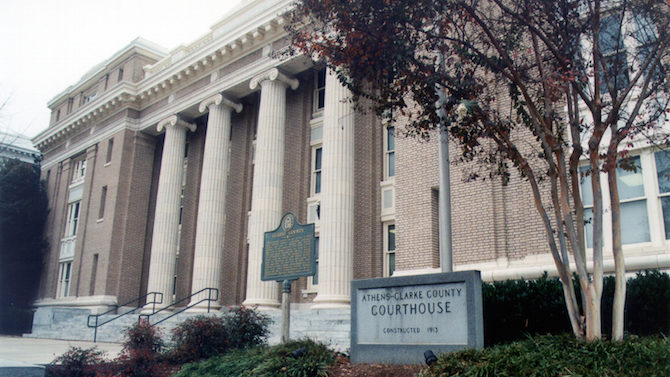 Balking at the cost of building a new courthouse as proposed by county staff, ACC commissioners (three newly seated, and with a new mayor) insisted at last week’s work session that the price tag for replacing or supplementing Athens’ 105-year-old courthouse needs to come down.

A $72 million new courthouse, built somewhere in the county on at least seven acres, could accommodate all judicial functions, provide better security and prevent crime victims from crossing paths with accused perpetrators, Central Services Director David Fluck told commissioners. Right now, potential jurors must sit waiting on steps or planters, and accused persons must be “paraded” in chains through public hallways, even though they’re legally considered innocent until and unless they’re convicted.

But spending $81 million—$9 million would go toward renovating the existing courthouse into city government offices—would require almost a third of the $278 million that the next round of a 1 percent sales tax (SPLOST) would produce over 10 years, assuming voters agree to extend the tax.

“That is going to be a hard pill to swallow for our taxpayers,” Davenport said. Commissioners, and a citizens committee vetting the 87 other projects that have been proposed, hope to spread that money over as many worthy projects as possible—and want voters to like the list enough to approve it. Fluck acknowledged that the county’s three studies of space needs never “looked directly” at renovating existing buildings, like the former Macy’s at Georgia Square Mall, for judicial uses.

Also discussed at the nearly five-hour work session: priorities for new sidewalks and bikeways. Wider and better-separated bike lanes on Cedar Shoals Drive would be justified because the existing narrow bike lanes are too close to 50-miles-per-hour traffic and have “little acceptance” or use by bicyclists, Transportation and Public Works Director Drew Raessler told the commission. And while Prince Avenue is “a challenge” and not one of five top-priority bike projects, Raessler assured Hamby that concepts for Prince are being developed along the street’s whole length (including a safety audit by GDOT) that might involve bikeways along sidewalks or through “under-utilized” parking areas—a strategy favored by Herod. “I’ve long thought that we do bike lanes wrong,” Herod said, and should widen sidewalks rather than roads to accommodate bike lanes. Raessler also told commissioners that he plans to hire a “bicycle/pedestrian safety coordinator” to help plan facilities and look proactively at dangers.

Thornton wanted to know why the North Avenue bike/pedestrian route does not extend across the Loop. “The folks on North Avenue… do not feel they’ve been included in all these extra penny taxes,” she said. Walking the Loop overpass, with its multiple entry and exit ramps, is a dangerous business, she noted, and Raessler agreed. Instead, the planned North Avenue route will follow Old Hull Road to Athens Tech and Kroger. But “we need to look a little farther up North Avenue” beyond the Loop too, Thornton urged.

Commissioners also heard the recommendations of a task force on equity and inclusion appointed by then-Mayor Nancy Denson following earlier incidents of discrimination at downtown bars. Going beyond legal requirements (such as requiring bars to post clear dress codes), the citizens task force envisions reaching into the community and within the government to encourage equitable hiring (in ACC government, it’s women and Hispanics who are mostly under-represented, Williams said), to encourage business and entrepreneurial successes of minority groups (defined by race, gender, sexual orientation, disability, youth and elderly persons), and outreach to young people. A new Office of Equity and Inclusion (with one employee) would be established under the Manager’s Office and a citizens advisory committee appointed. The effort would be bolstered by participation in the national Government Alliance on Race and Equity. Girtz and several commissioners noted the necessity of recognizing past failures and abuses in order to demonstrate the need for successful efforts.