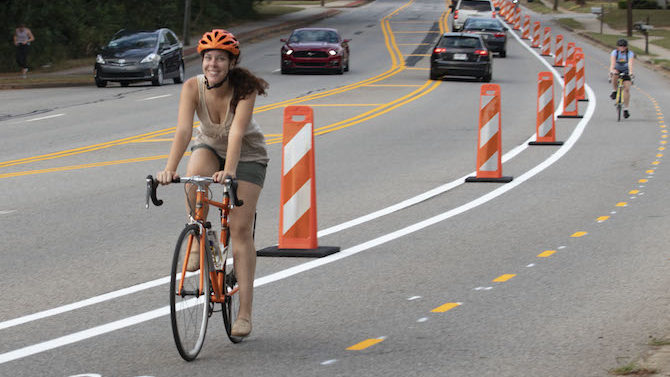 Showing some buyer’s remorse about the bicycle/pedestrian plan they adopted last month, a majority of Athens-Clarke County commissioners reconsidered last week and voted to “accept” but not “adopt” the Athens in Motion plan for future bikeways and sidewalks.

What’s the difference? Commissioner Jerry NeSmith (who was absent for the original vote) and other commissioners had some doubts about the plan’s project priorities and how they were arrived at, and didn’t want to be committed to a plan they had no hand in fashioning.

The plan was written, following extensive public input, by a committee of 12 citizens supported by county-paid consultants and county staffers. It details some 200 bike and sidewalk projects throughout the county that might be built in coming decades as funding is available. (The transportation sales tax passed by voters in 2017 includes $17 million in initial funds.)

Top-ranked sidewalk projects are along Jefferson River Road, Cherokee Road, Riverbend Road and King Avenue; bike priorities include the multi-use path on Barber Street already planned, bike lanes along Milledge, Hawthorne and North Avenue, and wider bike lanes on Cedar Shoals Drive. No projects would be built without the commission’s approval, but NeSmith said his Westside/Atlanta Highway district got short shrift in the plan. “We were very much under-represented,” he said.

But “geographic parity is not a goal of the plan,” committee member and BikeAthens Executive Director Tyler Dewey told Flagpole. Rather, routes that connect to parks and shopping, to poorer residents and those who use transit the most, and areas with few sidewalks got higher priorities, along with safety and “level of comfort” for bike facilities. Dewey defended Cedar Shoals as a priority: “Yes, Cedar Shoals [already] has bike lanes, but it also has a very high speed limit, which makes it very stressful to ride.” Commissioners scheduled a fuller discussion of the Athens in Motion proposals for a Jan. 10 work session.

A particular flash point—though actually unrelated to the new plan—was the temporary bike lanes marked out in early September along Barnett Shoals Road between Kroger and Whitehall Road, which reduced Barnett Shoals from four to three lanes. Delays caused by the reconfiguration did not exceed 20 seconds, staff reports said, but drivers didn’t like the experiment, and they let commissioners know it. “We got more comment on this than… any other project, certainly since I’ve been on the commission,” said Andy Herod. That section of Barnett Shoals has been controversial in the past, when a proposed median sparked loud pushback, and so have lane reductions in other places intended to slow traffic for safety and provide space for bikes.

Several commissioners said they wanted to see curb-separated bike lanes, as recommended by the Athens in Motion plan, or a multi-use path built there instead, but those options could require additional land and cost up to $1 million. On-street bike lanes are only used by “the road warriors—people who are going to get out and take their lives in their own hands being next to a car,” said Commissioner Sharyn Dickerson.

But Dickerson’s suggestion to simply pave over the existing sidewalk to allow bicycle traffic would not meet “typical design standards,” Public Works Director Drew Raessler told Flagpole. And a motion by Commissioner Allison Wright to replace the experimental two-way lanes with more conventional bike lanes on both sides of the road, as requested by two cyclists who spoke, failed by one vote. With no plans for bike lanes in the works, Barnett Shoals will be “immediately” changed back to four lanes, commissioners decided.