Can a University of Virginia Program Turn Around ‘Failing’ Gaines Elementary? 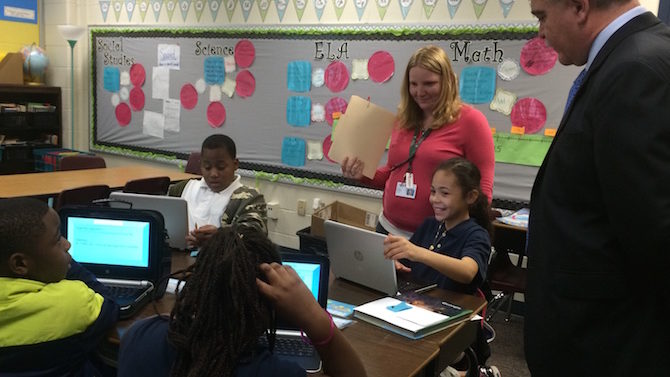 If the Clarke County Board of Education agrees, the school district will use $350,000 in federal Title I money for low-income schools to engage a turnaround team from the University of Virginia to help “turn around” Gaines Elementary. The school has been listed as “underperforming” by state officials for its three-year average score of 55.3 on the College and Career Readiness Performance Index—within the bottom 5 percent. Gaines was one of 104 schools on the list across the state, most of them in large urban districts. Some of those schools could be taken over by the state.

CCSD Superintendent Demond Means told the Clarke County Board of Education at its Thursday work session that the University of Virginia School Turnaround Program is a “unique, strong program” that involves both the university’s business school and its education school, one recognized by the federal government as one of the best in the country. There are four other CCSD schools not on the state list but which are also underperforming, he said. The UVA program “can help us,” he said, adding that administrators will learn practices that will benefit the entire district.

It’s the same UVA program Means tried to sell to the Milwaukee Public Schools for the 2016–17 school year, when he was the commissioner for Wisconsin’s Opportunity Schools and Partnership Program, similar to Georgia’s turnaround program. He also wanted Milwaukee schools to contract with teacher professional development nonprofit AVID, as Clarke County has done. The Milwaukee school district didn’t get involved with either entity.

Means said the school district’s partners at the University of Georgia don’t have problems with the school district using UVA and look forward to working with them. Attending Thursday’s meeting was Dera Wilson, part of the UVA leadership team, who lives in Conyers. She said the UVA program will work “to create the right conditions at the district level,” by helping the district create its own “rubrics and metrics.”  Professionals from the central office will travel to Charlottesville for three days of “boot camp” training.

Means sketched a scenario of what might happen if the board doesn’t agree to pay for the UVA program: the state’s turnaround officer could come to Athens and “take over” the running of Gaines Elementary. The officer could then look from Gaines, a “feeder” school, to Hilsman, and then to Cedar Shoals, “and poke around the district for problems.” There would be a series of interventions, which he believes would be like those the UVA offers.

Earlier in the work session, board members objected to a sentence in a revised policy about Local School Governance Teams. The single sentence was enough to draw parents and interested community members to the session. At least two board members, John Knox and Greg Davis, said they were “troubled” by the wording of the proposed policy. Board Vice President Sarah Ellis had a little difficulty in understanding their objections.

The language the two found troubling said: “The primary decision-making authority of Local School Governance Teams is (1) select finalists for principal vacancies and (2) approve and monitor the School Growth Plan for the purpose of improving student achievement, per the charter system contract.” Greg Davis said the proposed policy would reduce the power of the LSGTs. After some discussion among board members, Means offered a rephrasing of the policy to say: “The authority of Local School Governance Teams shall be in alignment with Appendix B of the Charter System Contract.”

Means also reported that 125 staff members have been trained in “equity work.” Teacher teams will deliver information, and each school will develop its equity plans. Means noted that while the school district is 49 percent black, black children make up 5 percent of those in gifted programs. Black children are the majority of those being suspended. “We have to reimage how we are serving kids,” Means said.

School growth plans, approved by Local School Governance Teams, should include equity issues. Means said each school must grapple with its issues and come up with a plan to figure out how to be equitable.