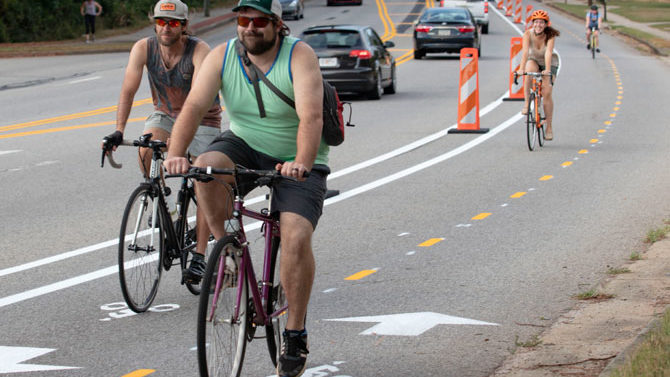 Several people referenced the famous Field of Dreams quote, “If you build it, they will come,” during a debate last week on whether to keep the temporary bike path on Barnett Shoals Road. They may not come, but they may at least get used to it.

Faced with a tough decision, the Athens-Clarke County Commission did what it does best: punt. On Mike Hamby’s motion, the commission voted 7–2 (with Jared Bailey and Mariah Parker opposed, and Jerry NeSmith absent) to put off a decision until their Nov. 6 meeting to gather more data.

The initial data indicates that reconfiguring a four-lane stretch of Barnett Shoals between Whitehall and College Station roads to two car lanes, a center turn lane and a two-way bike path had a net zero effect on traffic, with travel times increasing by 14 seconds during the morning rush hour and declining by 15 seconds in the afternoon. Yet out of about 1,000 comments—perhaps a record for public input—73 percent opposed keeping the path.

“There may be some folks who were dead set against it who may change their minds when they see it for a little bit,” Hamby said.

Such projects almost always generate backlash, because people in general hate change, but it usually dissipates once they become used to the changes. In this case, though, 53 percent of people who filled out a survey in August supported the test.

In this case, though, maybe more time is needed to assuage all the concerns people have about emergency vehicles, delivery trucks, school buses, drivers driving in the bike lane, turning in and out of side streets and everything else that always comes up whenever a bike lane is discussed, and which usually seems to work itself out. After all, many people, even avid cyclists, in Athens have never seen such a two-lane path, nor a bike box like the one at the College Station intersection.

Studies suggest that separated two-way paths like the one on Barnett Shoals are safer than the traditional bike lanes Athenians are used to. Regardless of what type of bike infrastructure is installed, a three-lane configuration reduces crashes and is safer for everyone than a four-lane road with no median.

“The Barnett Shoals three-plus-two configuration would have significant safety benefits for drivers, for people walking and for people on bikes, and it would do so at a fraction of the cost of a bike path adjacent to the road,” said Tyler Dewey, executive director of BikeAthens.

Those are the two objections to Herod and Commissioner Sharyn Dickerson’s proposal to keep four car lanes and build a multi-use path instead: It would cost roughly $1 million, versus $23,000 to paint the bike path in a car lane, and it continues to privilege drivers’ convenience over safety by doing nothing to slow drivers down. The three-lane configuration reduced speeds by five miles per hour, from 48 to 43 mph at the 85th percentile—still over the posted speed limit. (The 85th percentile, a measure commonly used by traffic engineers, means that 85 percent of drivers are below and 15 percent above that speed.) That $1 million would come out of sales-tax funds set aside for bike infrastructure, so essentially some other neighborhood would be deprived of a future bike project because Eastside drivers don’t want to slow down a little bit.

By putting off a politically contentious decision, commissioners may have set themselves up to have to make two. Bike facilities on Barnett Shoals are only being discussed because the commission’s Complete Streets policy requires the commission to consider converting four-lane roads to three whenever they’re up for repaving, because that’s the cheapest time to do it, and Barnett Shoals is about to be repaved. But by November, it may be too cold, Manager Blaine Williams warned the commission. That means that next month, the commission may not only have to decide on a permanent configuration, but depending on which way they go, whether to keep the temporary bike path until it warms up again next spring.

After the Chase Street debacle, this debate further highlighted the absurdity of ACC’s Complete Streets policy. Luckily, the commission did unanimously approve Athens in Motion, the long-awaited update of ACC’s bike and pedestrian master plan.

“This goes above and beyond anything I’ve seen in the state,” said Elliott Caldwell, executive director of Georgia Bikes.

Actually implementing the plan, though, won’t happen until the commission can have a work session to talk about whose districts get improvements first. The top five priorities are the previously approved multi-use path on Barber Street, along with, for bikes, parts of Milledge Avenue, Hawthorne Avenue, North Avenue and (puzzlingly, because it already has bike lanes) Cedar Shoals Drive. For sidewalks, the top-ranked projects are along parts of Jefferson River Road, Cherokee Road, Riverbend Road and King Avenue.

Not enough are on the Eastside to please Dickerson, and other commissioners had questions, too.

“I need a better understanding about how these five were chosen,” Hamby said.

Commissioner Melissa Link pointed to the criteria included in the report, which include equity, filling in gaps and proximity to businesses, schools, services and transit.

“It’s not like these were chosen randomly,” she said.

Earlier in the meeting, bike shop manager Micah Morlock spoke to the commission about Athens in Motion.

“We like to think of ourselves as a progressive community, but if you look at our contemporaries around the Southeast or nationwide, we’re way behind in terms of a safe place to ride or walk in this town,” he said.

The plan is also progressive in terms of economic development strategy—focusing on quality of life rather than tax incentives for smokestacks, and helping low-income people get to work. Morlock pointed out that, being the home of the Twilight Criterium and several champion cyclists, Athens is already known nationally as a biking destination.

“We will draw business and industry because people want to live in a walkable and bikeable city,” said Carol Myers, who served on the citizen committee that wrote the plan with consultants Toole Design Group. “We will also serve the 25 percent of residents who don’t have a car or only have one vehicle. This plan is about making Athens a better place for everyone.”

We’ll see how progressive Athens really is when it comes time to actually design and build the individual projects in Athens in Motion.