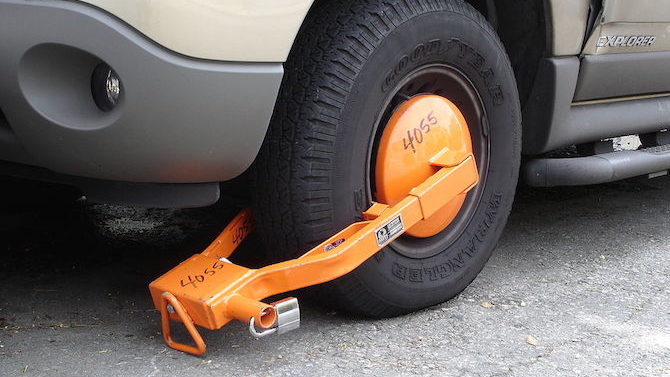 Athens-Clarke County commissioners are likely to ban booting on private property next month after receiving complaints that lot owners are hiring people to lie in wait and immobilize drivers’ wheels for infractions like going into a business that isn’t associated with the lot, then charge a fee to remove the boots.

Commissioner Andy Herod, who chairs the Government Operations Committee, said he first heard such complaints after last year’s Independence Day fireworks show downtown. “There were some out-of-town companies that came all the way from Atlanta to boot several people,” Herod said the Sept. 18 agenda-setting meeting. “There was a sense that there was some predatory-type activity taking place.”

The GOC recommended the booting ban in response. Commissioner Jared Bailey asked about the difference between booting and towing. Herod responded that towing cars is more involved and less likely to be abused. “It [booting] seems to be more about revenue generation than it is about enforcing access to property,” he said.

The Athens Downtown Development Authority and police, however, will still boot cars if the owner has six unpaid parking tickets or owes more than $200 in fines. Commissioner Melissa Link drew a distinction between government booting and booting by private property owners.

“You can go to court and defend yourself,” Link said. “There’s an extended process. If you get a boot, you know it’s been coming for a long time. It’s not that waiting to jump on you that goes on in some of the private lots.”