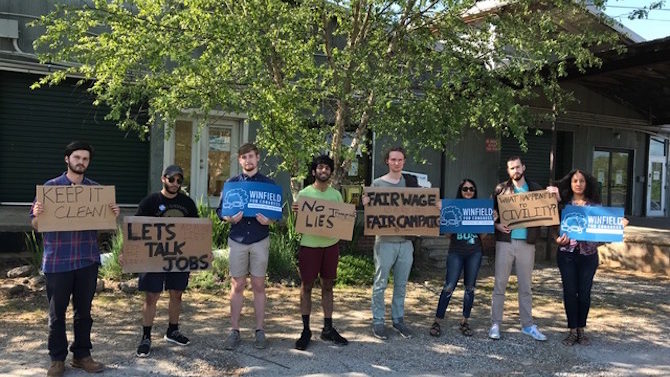 A debate last week between the two leading Democrats in the race to unseat U.S. Rep. Jody Hice turned tense during a sharp exchange over University of Georgia philosophy professor Richard Dien Winfield’s past writings and Chalis Montgomery’s campaign tactics.

When asked about “skeletons in their closets” that Republicans might use against them, Montgomery began by denying “that our campaign is guilty of a smear campaign. We are not. That is absolutely false, and I reject that premise.”

She then took shots at Winfield about one of his books, The Just Family, a philosophical treatise that examines topics like family values, children’s rights and same-sex relationships. Montgomery said that “the writings may be used by the Republican opposition in the fall,” and that the work “does not represent mainstream family values.”

The exchange starts at minute 40 of this video.

Montgomery also said that she, “as is the case with a lot of women candidates,” has been “subjected to a lot of half truths, a lot of misogyny and a lot of B.S.” but failed to describe the offense. (Montgomery may have been referring to a prominent Winfield supporter who, earlier in the campaign, threatened to “kill” Montgomery, which he said he only meant metaphorically but which she and some supporters took literally.)

Winfield said he stands by the book and invited the audience to read it. He compared himself to Socrates being put on trial. “I have nothing to hide, and despite the efforts of the opposition to drag us down into the river of dirty politics, the truth will prevail,” he said.

In a later interview, Winfield said his book covers “many factors of the human condition,” and that the reader will learn “the core of where family values really resides.” He told Flagpole that his staff discovered an individual who had recently begun posting negative commentary on social media about The Just Family in response to supportive messages about his campaign—possibly using bots, or programs that automatically post a response to certain keywords—and that the person was linked to Bold Blue, the consulting firm Montgomery hired. The messages suggested that Winfield wrote in support of unsavory ideas such as parental rights for rapists, a point which Winfield says is taken out of context and has never been brought up before despite the book being widely taught and reviewed.

Montgomery’s communications director, Kimberly Davis, declined to comment further, telling Flagpole her candidate “was in the district speaking to people.”

The day after the debate, members of Winfield’s staff responded to the insinuations by holding a silent protest in front of Montgomery’s campaign headquarters, carrying signs saying “Keep It Clean” and “What Happened to Civility?”

At the May 7 debate, held at the Athens-Clarke County Library and sponsored by the NAACP and Economic Justice Coalition, Montgomery and Winfield fielded audience questions read by moderator Robert Finch. The third candidate in the May 22 primary, Augusta nurse Tabitha Johnson-Green, did not attend due to car trouble.

Winfield presented his centerpiece policy, a federally sponsored full employment program designed to eliminate poverty that would guarantee a minimum of $20 per hour for jobs that would “build infrastructure, expand broadband, refurbish public facilities and fix up substandard housing.” In response to a question about how he would pay for the program, he said costs such as unemployment insurance, food and housing supports and other government programs would no longer be necessary, providing hundreds of billions in savings. He went on to suggest that half of the nation’s $1.7 trillion in health care spending could be cut by changing to a single-payer system, another important part of his platform. He also pointed out that FDR was able to create the massive Depression-era Works Progress Administration and Civilian Conservation Corps jobs programs that employed millions “when the country had far fewer resources, only 6 percent of the wealth we have now.” Benefits of the program would include a workplace in which employees would no longer fear losing their jobs as a consequence of reporting sexual harassment.

Montgomery, a music teacher and mother of a child with a chronic medical condition, was motivated to run for the seat when incumbent Hice “voted against my daughter and every other child who suffers from a chronic illness” by voting to repeal the Affordable Care Act the day before her husband lost his job. Universal, portable health care independent of employment status is the centerpiece of her campaign, and she provided numerous examples of “Georgia’s poor record of health care outcomes.”

She also supports a federal jobs program, but stipulated that she would only support a program that makes specific provisions for women and people of color, while Winfield spells out that his program embraces “everyone.” In her program, the minimum wage would be $15 per hour. It would be targeted in nature, with preference given to women, people of color and counties where jobs are most needed.

The winner of the May 22 primary (or July 24 runoff) will face the winner of the Republican primary: Hice, fast-food executive Joe Hunt or digital marketing firm owner Bradley Griffin.