Clayton Street Project Moves Ahead Despite Calls to Slow Down 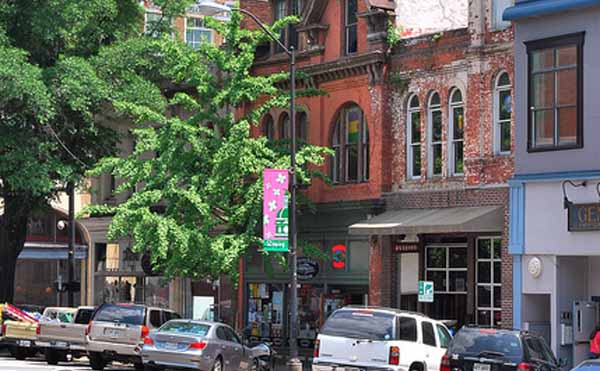 Athens-Clarke County commissioners are ready to move forward with big changes to Clayton Street in spite of some retailers’ complaints that they haven’t been kept informed about the project.

The commission is set to vote Jan. 2 on a “project concept” for long-awaited improvements to Clayton Street dating back to 2005. Plans call for underground sewer and stormwater work that should help cleanse Clayton of its stale-beer stench, removing one of three vehicle lanes between Thomas and Lumpkin streets, and widening the sidewalks so impediments like cafe railings and parking meters are easier to navigate.

Devin Clower, owner of Frontier, said she’s in favor of the project, but that business owners haven’t been given a chance to review the plans. “To not come to us and ask us our opinion is a slap in the face of the business owners in this town,” she told commissioners at their Dec. 19 work session.

“Each block has different needs,” Clower said, and taking a step back would allow county officials and business owners to craft a unique plan for each individual block.

Commissioner Melissa Link, for example, has called for a College Square-style gathering space on the block nearest to the Classic Center, which is mainly bars with little retail and is dead during the day. “This is way too important, and our downtown business owners have way too much at stake to be left out of this process,” Link said. “…We could have a really, really nice pedestrian gateway to Clayton Street.”

Other commissioners, though, say they’re fast-tracking the project to finish it up before the 2019 football season, rather than force retailers to suffer through two football and holiday seasons of construction. “We’re trying to minimize the pain to merchants to as limited a time as possible,” said Athens Downtown Development Authority co-director David Lynn.

“It’s the Super Bowl of retail,” Tim Stamey of Native America Gallery said of UGA football home games. “This is how we pay the light bill in July.” But Stamey added that some business owners didn’t know the road work was coming and are “scared.” He also reiterated Clower’s call for a block-by-block plan. “Each corner could be a destination, each block different,” he said.

Lynn told commissioners that he’s gone door-to-door to talk about the project, included it in weekly email newsletters and mentioned it at monthly ADDA and Downtown Athens Business Association meetings. “I can assure you that people know about this plan,” he said. Plus, Commissioner Jared Bailey said, the work session earlier this month where commissioners originally discussed the plan was open to the public. A two-lane Clayton Street is also included in the downtown master plan, and stakeholders got a look at the streetscape project back in 2013, before it was put off because bids came in too high.

And commissioners said they think they have a good feel for how Clayton Street business owners feel about the plan: They want wider sidewalks and the maximum amount of parking, Commissioner Jerry NeSmith said. “I don’t know what else we could do,” he said.

They also reassured business owners that there will be opportunities for public input later on. “This is the underground work,” NeSmith said. “When we go to the surface street, there’s going to be lots of public input. We haven’t conceived of that yet.” Lynn said he thinks “people are going to be more concerned about how Clayton Street looks and feels to them, and that means trees, plantings, flags and banners and so on.”

While Link was overstating her case by calling the accelerated timeframe “an assault on the democratic process,” and it shouldn’t take an engraved invitation to get stakeholders engaged, Hamby used an interesting turn of phrase at one point: “Public input can happen to us in a lot of ways.” History has shown that county officials should seek out all the public input they can get—not wait for it to happen to them—if only to save themselves heartburn later, especially on issues involving downtown.