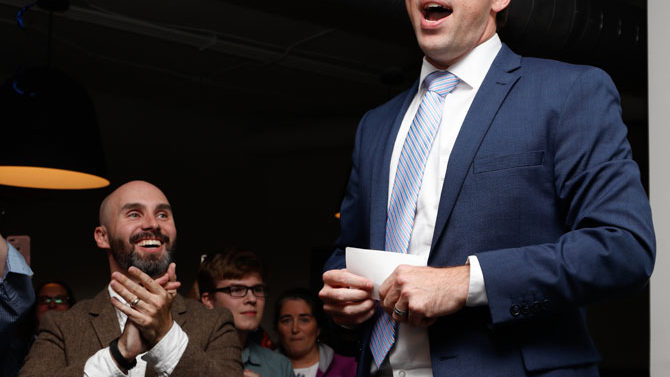 “Yup, that’s me, Jonathan Wallace. So you’re probably wondering how I got myself into this situation…”

Wallace, along with fellow Democrat and political newcomer Deborah Gonzalez, pulled off stunnings upsets last week in two right-leaning Athens-area state House of Representatives districts. He beat three Republicans on the way to winning a dominant 57 percent of the vote, while Gonzalez fended off a Republican opponent, Houston Gaines, who raised four times as much money as she did.

This marks the first time that all three Athens/Oconee House seats have been held by Democrats since the 1990s, back when everyone was a Democrat. Ironically, Republicans laid the groundwork for this moment six years ago, when they shifted voters around to create two Republican-leaning districts out of a red one and a blue one. Although the majorities of both districts consist of heavily Democratic Clarke County, the surrounding counties tended to tilt even more strongly toward Republicans, and turnout in Oconee always swamped Clarke’s, so both districts were deemed safe.

Years passed. Clarke County turned a slightly deeper shade of blue. Donald Trump was elected president, but he didn’t break 50 percent in District 117 and only won 119 by six points.

Then, last summer, Gov. Nathan Deal appointed Rep. Regina Quick to the bench and tapped Rep. Chuck Williams to take over the Georgia Forestry Commission. A special election was called for Nov. 7 to fill the seats.

Gonzalez had already been prepping to run when she discovered her opponent would be Houston Gaines, a popular young man from a prominent local family who was only a few months removed from serving as UGA student government president. Tapping his family, SGA and mentor Nancy Denson’s connections, Gaines quickly raised enough money to scare off any other potential opponents.

For Wallace, running was a game-time decision—he didn’t make up his mind until the weekend before qualifying started, giving him just two months to campaign. Gonzalez had planned to run regardless of whether the election was in 2017 or 2018, but seemed to get off to a slow start before hitting her stride. Both had incredible ground games, with teams of volunteers and paid staffers going door-to-door in neighborhoods.

“I always believed we could win this,” Gonzalez said on election night. “We’ve been canvassing for the last two weeks consecutively and getting really good feedback.”

Not many people shared that belief. The Gaines campaign was a juggernaut, raising $200,000, and he had the full backing of Atlanta’s GOP and business establishment. The mayor’s endorsement and subsequent expulsion from the Athens-Clarke County Democratic Committee had created a rift in the party. Democrats privately were glum about Gonzalez’s chances.

As it turned out, Denson had no sway—Gonzalez won 64 percent of the vote in Clarke County, showing that rank-and-file Democrats were united behind her. If anything, the Gaines endorsement may even have created a backlash that helped Gonzalez.

Gaines made some strategic choices that, in retrospect, obviously didn’t work. He labeled himself “the voice of a new generation,” but surrounded himself with old-school Athens figures like Denson and Vince and Barbara Dooley. It seemed like he was the only person in his campaign photos under 70. Past ACCDC chairman Russell Edwards hounded him about Trump, and he never could figure out a good answer. Then he stumbled again when Flagpole lobbed him a softball about his “unique perspective,” and he responded that, “It’s obvious just by looking at us that we have a different perspective.” He might have meant their age, but he was running against a Latina woman, so not everyone took it that way.

In the end, Gaines couldn’t justify why he was running as a 22-year-old, other than that a lot of powerful people liked him. Gonzalez has a lifetime of experience as a working-class mom and as a media and entertainment lawyer, and voters grew more comfortable with her as they got to know her.

“I think it was a lack of motivation” among Republicans, said Watkinsville City Councilman Dan Matthews. “[Gaines] didn’t have an issue that fired people up, and the lack of experience led people to not want to vote for him.”

While Gonzalez emphasized progressive, populist positions like Medicaid expansion, a $15 minimum wage and net neutrality, Wallace ran a more centrist campaign focused on pocketbook issues like lowering Georgia’s car insurance rates, which are among the highest in the nation. “My goal in entering this race was to push the conversation back to the middle, where I think most of this district, this state, this country lives,” Wallace said.

That makes sense, given that 119 is a bit more conservative than 117. Still, no one—no one—even entertained the possibility that Wallace would win without a runoff with a field of four candidates. At least until results from Oconee County came in, and he had a surprising 38 percent of the vote. Clarke County lagged behind, but when the first batch hit the Secretary of State’s website, Wallace had 52 percent, clinching victory. (He won an astounding 76 percent of the vote in Clarke County.) Still, it was so unbelievable that I had to double-check to confirm there wasn’t some hidden box of votes down there left to be counted. A cheer went up at Wallace’s election night party in an office on Milledge Avenue when journalists called the race on Twitter. Around the same time, Gonzalez—who was intentionally ignoring the returns at a private dinner party she hosted at her home—received a phone call from Gaines conceding.

Bob Trammell must have known something we didn’t. House Democrats recently elected the Luthersville representative their leader—replacing Stacey Abrams, who resigned to run for governor—and he trekked all the way to Athens to drop in on Gonzalez and Wallace. After years of leaving deep-red districts uncontested, Democrats ran for all eight open seats and flipped three of them.

“I think the takeaway is we should always strive to have competition,” Trammell said. “We should contest districts like this [119] where we haven’t had candidates, because voters are craving choice.”

Turnout in Clarke County nearly matched that in Oconee County, 22 percent to 23 percent. (And if you don’t think 22 percent is a lot, in the last countywide special election, in 2007, it was 16 percent.) Much of that was driven by Trump, according to Trammell. “People understand that elections have real consequences, and the differences between candidates is sometimes stark,” he said.

But Democrats should not get too comfortable. “Our reward for having won these seats is to [go] right back out and do it again,” Gonzalez said.

The Atlanta Journal-Constitution has already raised the possibility of Republicans redrawing these districts again in an effort to win them back in 2018. Gaines likely has six figures in his campaign account; we could very well see him again.

“I congratulate Rep.-Elect Deborah Gonzalez,” Gaines told Flagpole. “Before deciding on next steps, I am taking some time to reflect on the campaign and getting caught up on work. I’m proud of the race we ran with a positive vision for our state, and I do believe this district deserves and continues to want a candidate and representative who will run a positive and honest campaign. I’m humbled by the outpouring of support during and after the campaign, and I plan to continue staying involved. As I said throughout the campaign, I’m motivated first and foremost by service to my home community.”

Or maybe former Rep. Doug McKillip takes another crack at it. However it plays out, hanging on to these seats will be a challenge for Democrats.

“Our House Republican Caucus and Georgia GOP are already working to reclaim those seats lost last night in next year’s elections, when a greater percentage of Georgians will go to the polls,” House Speaker David Ralston told the AJC. Special elections can be flukey things (see: Broun, Paul). 2018 will tell whether Democratic gains are real.

Chalis Montgomery, for one, wants to believe that they are. She’s running against ultra-conservative U.S. Rep. Jody Hice in the ultra-conservative (except Athens) 10th Congressional District, and sent out a press release pointing to Gonzalez and Wallace’s wins, as well as Milledgeville electing its first female African-American mayor, as proof she’s a viable candidate. “With the Congressional election just under one year away, now is the time to keep our eyes on the prize—which is regaining a majority in Congress,” Montgomery said. “I’m ready to continue the fight, all the way to Washington.”

Oh, by the way, T-SPLOST passed by a 74-26 margin. That means sales taxes in Clarke County will go up 1 percent Apr. 1, and also that the city will fill a whole bunch of potholes and build new sidewalks, bike lanes, crosswalks, trails and bus shelters, improve the airport and expand bus service on Highway 29. Look for more info on how T-SPLOST will be implemented in next week’s Flagpole.