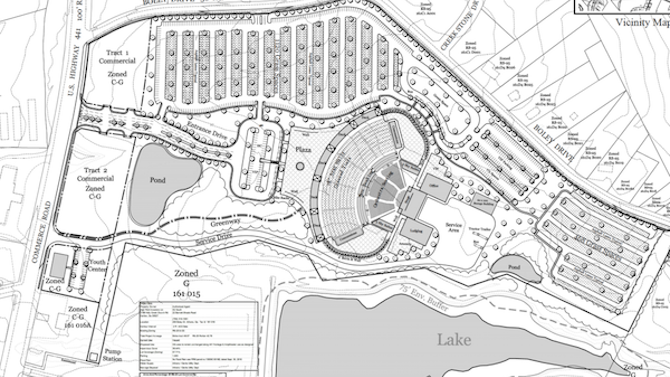 A proposed amphitheater off Commerce Road just north of the Loop got a chilly reception from Athens-Clarke County planning commissioners Nov. 2—a meeting where they also signed off on an Oconee Street QuikTrip, a Five Points restaurant and renovating the old ACTION Inc. headquarters.

“This idea has been a dream of mine,” amphitheater developer Clint Larkin, a former University of Georgia football player who now lives in Madison County, told the planning commission.

Larkin sought to ease concerns about traffic and noise: The amphitheater stage would point west, away from the adjacent residential neighborhood, and it would sit in a natural bowl surrounded by a grass berm and 20-foot-tall walls that would absorb 40 percent of the sound and deflect much of the rest, he said. All traffic would flow to and from Highway 441, and residential Boley Drive would be closed to concertgoers except in an emergency, he said.

But that was not enough to allay the concerns of critics or planning commissioners, who wanted acoustic and traffic studies done and wondered, with just 1,800 parking spaces for 8,000 seats, where any overflow parking would go. (They could park elsewhere and be shuttled in, amphitheater backers suggested.)

Former ACC commissioner George Maxwell and his wife, Betty, were among those who spoke out against the amphitheater. Betty Maxwell was born and raised on Boley Drive, she said, and her family still owns land there. It’s a dangerous road, they said, and people coming from east of Athens are likely to avoid traffic by getting off the Loop at North Avenue and driving to the amphitheater the back way, through Freeman Drive and Boley Drive.

Betty Maxwell and other opponents also worried about how the amphitheater would affect property values, rents and taxes on Boley Drive. Working-class people could be gentrified out of the affordable neighborhood, they said.

“It don’t make sense,” Betty Maxwell said. “There’s nothing we can do about it, but that’s how I feel.”

Planning commissioners pressed for more details. Lucy Rowland noted that ACC officials nixed a sewer main and lift station along 441 about a decade ago over concerns about how a leak or line break would affect Sandy Creek’s water quality and the city water supply. Athens’ water treatment plant is just a short distance downstream, off Barber Street. She was also skeptical that a traffic signal at Boley Drive and 441 would ever be approved and said it’s too dangerous for someone to stand in the middle of the highway directing traffic.

Several other planning commissioners shared Rowland’s concerns, and Alice Kinman added that she doesn’t see how the amphitheater could be connected to the North Oconee River Greenway across 441. “If you can’t provide a bridge over Commerce Road, I don’t even think it [the connection] should be there,” Kinman said.

The planning commission just provided input and didn’t take a vote. Larkin will have an opportunity to revise the plans and resubmit them.

The QuikTrip—sent back by county commissioners for tweaks last month—had more luck, winning a unanimous recommendation for approval. The gas station and convenience store would be located inside a future Loop cloverleaf whenever the Georgia Department of Transportation gets around to rebuilding the Lexington Road interchange. In a unique solution for access, the QuikTrip will have two entrances: one off Oconee Street, and one off the future Loop on-ramp. Plans also include public parking to complement the park-and-ride lot on the other side of Oconee, and a connection to Firefly Trail, which will run along the back side of the property.

“We believe it will be a positive thing for the rail-trail,” said rails-to-trails committee member Dorothy O’Niell. She asked QuikTrip to plant trees along the trail, which were added to the plan, but planning commissioners couldn’t figure out how to incorporate her other request, for shrubbery to shield a dumpster.

The planning commission also recommended approval of El Barrio—a Mexican restaurant proposed for a house on South Milledge Avenue just south of Five Points, near Waffle House—despite concerns about lack of parking. (The restaurant would be two spots shy of what code requires for its 108 seating capacity.) Co-owner Scott Parrish told planning commissioners that many of the customers at his nearby restaurant The Pine walk there, and he expects El Barrio customers to walk, too. Parking requirements “do tend to be excessive,” Kinman agreed, and the planning commissioners who live in Five Points said they don’t think parking on the street in residential neighborhoods will be an issue.

The proposal to convert a historic 1908 schoolhouse on Oconee Street (up Carr’s Hill from the main road, across from the Methodist church) into apartments also passed muster with the planning commission. It was most recently occupied by the nonprofit ACTION Inc., which tried to sell it to a developer who wanted to tear it down in 2007, but the ACC Commission rejected that plan. This one would preserve the building’s exterior and is supported by the Athens-Clarke Heritage Foundation. The ACHF will host an open house at the building Thursday, Nov. 9 from noon–5:30 p.m. Oconee Street School alumni will give tours throughout the afternoon, and developer Wesley DeFoor and architectural historian Brian LaBrie will be on hand to answer questions until 2 p.m. It is free and open to the public.