Catching Up on Campus Carry and More Local News 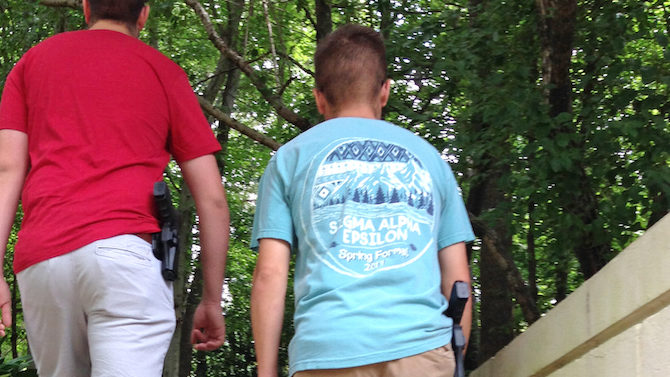 To our new freshman friends: Welcome to Athens, and to Flagpole. We’re your friendly neighborhood alt-weekly, bringing you all (well, most of) the news that’s fit to print, with a bit of a liberal slant. (You’re not in Cobb County anymore; in this town, the political spectrum runs from Hillary Clinton to Hugo Chavez.) City Dope is the column where you’ll find all sorts of news and analysis about local politics. We townies sometimes like to bitch and moan about the youngs, with their loud parties and lack of driving skills, but in reality we love students and know y’all are a big part of what makes this great city tick. As your four (or five, or six) years here go on, we hope you’ll stay informed and get involved. Politics in a strange city can be daunting at first, but if you stick with it and get to know the issues and personalities, you’ll also find it can be entertaining as hell.

For all the freshmen and upperclassmen who left for the summer and UGA faculty and staff that maybe went to the beach and checked out, the big news over the past few months was that the new campus carry law took effect July 1, meaning that if you have a concealed-carry permit, you can carry a gun onto some parts of campus. It’s pretty complicated, so let’s review.

First of all, just because you can carry a gun doesn’t mean you should. It’s completely unnecessary—violent crime is extremely rare on campus, and if there were some sort of mass shooting, God forbid, law enforcement would prefer that you stay out of the way, because if you open fire, you’re liable to shoot an innocent person by accident or get yourself shot, because the cops won’t be able to tell the good guy with the gun from the bad guy with the gun.

Now, if you insist on the Charles Bronson cosplay, here are the rules:

• Not just anybody can carry a gun. You have to have a concealed-carry permit, which means you have to be 21, go down to the courthouse, fill out the paperwork and go through a background check.

• Handguns only. No rifles, shotguns, bazookas, RPGs, etc. Or knives, swords, baseball bats or nunchuks, for that matter.

• Concealed means concealed: The weapon has to be hidden under your clothes or in a bag.

• Guns remain banned at athletic events and in dorms, on-campus fraternity and sorority houses, and faculty and staff offices. So, you can pack while you tailgate, but not in Sanford Stadium. And you can pack in class—most of the time; we’ll get to that later—but you can’t keep your gun in your dorm room or take it with you to talk to your professor during office hours.

• UGA will not supply gun lockers or other storage facilities, so if you’re going from a place where guns are allowed to one where they’re not, your best option will be to go back to your car and lock it in the glove box.

• In general, it’s the gun carrier’s responsibility to know the rules and follow them, so please do so. A lot of people on campus are on edge about this law already.

Conveniently, for our summer-in-review purposes, the Athens-Clarke County Commission wrapped up several pieces of unfinished business that have been lingering for a few months.

At their Aug. 1 meeting, the commission finally approved a list of transportation projects that would be funded by a 1 percent sales tax up for a vote in November that made everyone at least moderately happy. Funding to complete Firefly Trail all the way from Dudley Park to Winterville has been restored, and money was added for pedestrian improvements in the West Broad area and new bike lanes, all without touching the precious $26 million for road repaving. One kink: Manager Blaine Williams told commissioners they could cut $4 million earmarked for buying new buses because the county has received federal and state grants, but it’s come to light that Athens Transit was not consulted on that decision. The cut could mean ACC won’t have enough funding to match future grants, and that Athens Transit will continue to fall behind on replacing aging buses due to lack of funding.

Commissioners also unanimously approved a study area for a potential Milledge Circle historic district, which some homeowners have been seeking to stem a spate of tear-downs to make way for out-of-scale houses in the neighborhood. In the process, the western side of Milledge Circle—where support for the historic district is slim—was removed both from the study area and a demolition moratorium the commission declared in May.

“I gotta vote yes, I guess,” said even Commissioner Diane Bell, who kicked off the vitriolic process by allowing a Milledge Circle demolition to move forward without neighbors’ knowledge or consent.

The long national nightmare that was the Chase Street road diet is over, too—for now. After weeks of complaints from business owners in the Chase/Oneta/Newton Bridge industrial area—some of whom were incredibly rude at a public forum last month—the formerly four-lane portion of the street will be returned to its original configuration, if it hasn’t been done already.

Delays averaging 58 seconds southbound on Chase, stemming from the removal of one of two left-turn lanes at the Loop, have been untenable for the truck-reliant businesses in the area, especially during afternoon rush hour. And tempers flared at the July 26 forum, with the group of business owners in attendance frequently interrupting Transportation and Public Works Director Drew Raessler to berate him for a decision he didn’t even make. (The reconfiguration was based on his predecessor David Clark’s recommendation.)

At one point, cycling advocate Gretchen Elsner asked what could be done to get workers on bikes. Another attendee scoffed at the idea. “We work for a living. We sweat,” he said. “What you’re talking about, you’re foolish.”

As several business owners and executives explained, many workers commute from other counties, so it’s not practical to bike. Which begs the question: Why do so many workers at Athens plants live outside of Athens? It could have something to do with housing costs. The workforce housing study released last year noted that not enough single-family homes are being built in Athens to keep up with demand. Incomes and housing costs are out of whack, with the median home far out of reach of the average worker, and so many families whose breadwinners work in Clarke County are forced to live elsewhere.

Businesses aren’t the only ones affected, though. Vinson Drive residents could bike down Chase to Prince Avenue—if it were safe. Parents use Chase to take their kids to Holland Park. Boulevard residents have to deal with speeding cars and trucks coming off the Loop. Some can hardly even pull out of their driveways. And pedestrian and bike, along with vehicle, traffic is likely to increase as vacant industrial properties like Southern Mill are redeveloped as mixed use.

“It’s several things coming together at once,” Commissioner Jared Bailey said. “We need to figure out how to best deal with those traffic interactions.”

As part of the lane re-reconfiguration, the never-striped bike lanes along Chase north of Boulevard will be removed, even the ones through the residential portion of the street. “We feel like it’s more dangerous to have a small section where you’re merging with cars than have it consistent there,” Williams said.

However, more changes might be coming. The consultant who’s working on the countywide bike and pedestrian master plan study will turn in a Complete Streets report for Chase in November. Solutions might include “teardrop roundabout” interchanges at the Loop, or routing cyclists down Oneta to less-busy Barber Street, Raessler said. “We can’t simply go back and say, ‘that’s it,’ in my opinion,” he said.

In the meantime, the new crosswalk at Chase Street Elementary will be installed this month, and plans for sidewalk and crosswalk improvements on Chase at Nantahala are not affected by the vote.

Athens Transit’s Route 30, the “Northside Circular,” started service on Sunday, Aug. 7, serving a wide swath of East Athens, from the airport and Dudley Park to the Madison County line, including Athens Tech, the Kroger and Ingles on U.S. 29, the Hallmark and Pinewoods mobile home communities, the Department of Motor Vehicle Service and the VA clinic.

This bus will work a little differently from other Athens Transit routes: It will run on a fixed route along Danielsville Road, 29, Voyles Road, Spring Valley, Athena Drive and Old Hull Road, with regular stops. However, anyone within a mile of the route can also call ahead (the number is 706-613-3439), and the bus will come pick them up.

Unlike other routes, Route 30 also doesn’t begin and end at the Multimodal Center, instead circulating around northeast Athens. But riders can transfer to Route 1 (North Avenue), 8 (Barber/Chase) or 24 (Athens Tech) to get downtown.