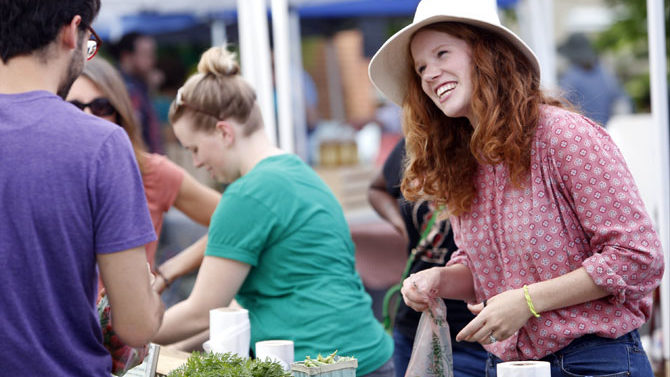 Clarke County School Superintendent Demond Means’ first day on the job was July 10, and he quickly got a taste of his new job’s challenges while sitting in on the school board’s property committee meeting the next day.

Associate Superintendent Ted Gilbert gave the committee a presentation on a consultant’s “feasibility study” for the West Broad neighborhood. It includes several options for the old West Broad School, which is slated to be renovated into the district’s new central office. (The old Mitchell Bridge office was sold to mental health and addiction nonprofit Advantage Behavioral Health Systems, and administrators are currently split between the H.T. Edwards building and Whitehead Road Elementary School.)

At issue is whether the Athens Land Trust’s community garden at the long-vacant West Broad School should be razed to make way for parking. Customers and vendors (of both races) at the Saturday farmers market there oppose the plan, while others in the black community do not want the garden to stay. The school board put a decision on hold last year for further study.

Three of the study’s four options include the garden. One option envisions the school as a home for nonprofits, one as district offices, and one as a mix. This sparked a heated debate.

“I don’t foresee a garden there,” board President Charles Worthy said. (He expounded on this later, saying the garden would be incompatible with development in the neighborhood, and that offices without ample parking is “senseless.”)

“I thought the garden is the garden,” Vice President Sarah Ellis responded. “I thought we weren’t going to revisit that.”

“It’s a community,” said board member Greg Davis. “We’re not a fiefdom.”

Ellis called for a space needs analysis. A previous one concluded that the district needs 35,000 square feet of office space, according to Gilbert. It may not be up to date, though, and there’s no rush to consolidate offices. “I’m sure everybody together is more efficient, but it’s not really a big hindrance,” he said.

Board member Linda Davis wondered whether H.T. Edwards has adequate space for the career academy (vocational school) to expand. “I’m really not concerned about [the garden], because I know there are other opportunities for that,” she said.

“I have no problem with the garden at all,” board member Ovita Thornton said. But Thornton is stepping down next year to run for commission, and might not be around when a decision is made.

Greg Davis argued that the garden and farmers market are valuable as a community center, just as the West Broad School was a community center. Maybe Classic City High School (the alternative school) should move there, he suggested. “What I’m interested in is a place that’s not shut down after nine to five, Monday through Friday,” he said.

“We do have a responsibility to make our facilities available to the community,” Linda Davis said, but “hold everybody to the same standards when it comes to access.”

The Davises kept going at it. “What I hear some people say is, ‘I don’t care what you do there, I just don’t want the garden,’” Greg Davis said.

“I don’t see a garden there,” Worthy responded. “Not with the changes that are taking place in Athens, Georgia. There are other places for a garden.”

Thornton reminded the board that agriculture is a career. (Students learn job skills by growing food, selling it at the farmers market and cooking it to serve in school cafeterias.) “We minimize it as picking cotton,” she said. “In urban areas, agriculture is becoming huge. They’re finding a way, because agriculture will be here even when some of the manufacturing jobs are gone.

“I’m real worried about some of the changes taking place” in the neighborhood, Thornton said. “I’m not going to say the G-word [gentrification]. But the garden stabilizes the neighborhood.”

The feasibility study’s other recommendations include wider sidewalks with landscaped buffers and the elimination of fences around Clarke Central, Clarke Middle and Alps Road Elementary; better connectivity, such as a path from Clarke Middle to the library; and beautification efforts, such as a mural on H.T. Edwards’ concrete retaining wall. It’s unclear, however, who would pay for what—CCSD is responsible for improvements on its property, while anything in the public right-of-way is Athens-Clarke County’s. The district has likely missed the boat on T-SPLOST as a funding source. The ACC Commission will vote to finalize the list of funded projects for the November sales-tax referendum on Aug. 1. (Click here for more.) But Gilbert didn’t know that, demonstrating again the lack of communication between ACC and CCSD.

The committee agreed to wait for an updated space needs analysis and for Means to get caught up before taking up the garden issue again. Means—wisely—had no comment.