The ACC Commission Has Moratorium Mania! 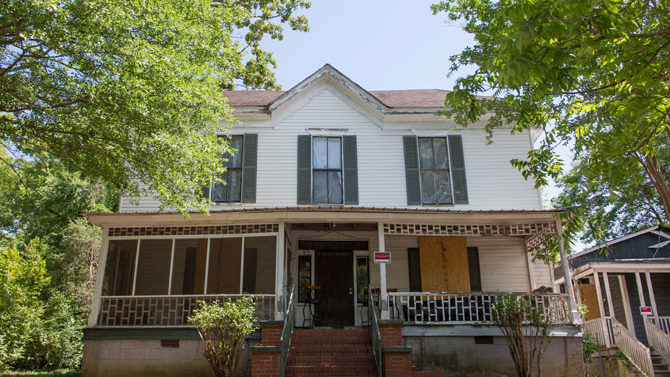 During a contentious four-hour called meeting last week, the Athens-Clarke County Commission approved moratoriums on demolitions and some construction on Milledge Circle and Castalia Avenue in Five Points and in the West Hancock neighborhood.

Both moratoriums apply to demolitions and changes to facades and rooflines for one year while neighborhood residents, county planners and commissioners study ways to protect those neighborhoods’ historic character. But they allow interior renovations and add-ons to the backs of homes, in an effort to appease opponents who are planning improvement projects.

On Milledge Circle, residents are fighting to stop homebuyers from tearing down historic residences to build larger suburban-style houses—which they said has happened three times already and could happen again at 398 Milledge Circle.

“You come to realize Athens has been at the center of a demolition derby, so to speak,” Milledge Circle resident and historic preservation professor John Waters said. “You don’t know what to expect next door to your property, or what it’s going to do to your quality of life.”

Travis Elrod bought 398 Milledge Circle for $667,000 just for the land underneath it, astonishing neighbors who now fear any house on the street could be purchased simply to be demolished.

“We came together as a neighborhood over this issue,” said Claudio Saunt, who gathered signatures from about 50 of the street’s 87 homeowners asking for the moratorium.

Elrod, speaking publicly for the first time about the controversy, noted that his actions were “completely legal” and decried the “vicious” and “startling” attacks aimed at his family. He said a moratorium and historic designation would cost him financially, while also seeking to assuage neighbors. “I can assure you that whatever we decide to do with the property, it will be respectful,” he said.

Laura Welch told commissioners that she is negotiating with Elrod to buy the house and have it moved to a vacant lot elsewhere in Five Points. “I simply want to communicate that we all care about this house and the neighborhood,” Welch said.

That was a rare moment of civility. The debate broke down earlier this week into an acrimonious and often personal dispute on the Five Points neighborhood listserv, and the animosity carried over to the Tuesday-night meeting. A lawyer representing Elrod even issued a thinly veiled threat of a lawsuit. “There’s been a lot of bullying going on,” Mike Fitzgerald said. “There’s been a lot of childish behavior. That’s the worst part about this.”

Realtors, homebuilders and contractors have made up the bulk of the opposition, but a few residents stepped forward Tuesday to say that the proposed moratorium was not what they had (literally) signed up for. However, changes commissioners made on the floor brought it more in line with the language on the petition.

“Everything you do out from the back of your house—if you want to build a porch, that’s fine,” Commissioner Mike Hamby said.

Mayor Nancy Denson did not want to put the moratorium on the agenda because, she said, she is opposed to moratoriums on principle (although she supported one for downtown earlier this year). So nine commissioners forced it onto the agenda—all but “Demo” Diane Bell, who infamously lifted a 90-day hold she’d placed on a demolition permit for 398 Milledge Circle without consulting her constituents or fellow commissioners.

“Ninety days is long enough for the community to look at the process” for creating a historic district, Denson said—but because of Bell’s action, the community didn’t have 90 days.

Bell was one of three votes against the Milledge Circle moratorium, joining commissioners Sharyn Dickerson and Harry Sims. On Castalia, it passed 9–1, with Bell in opposition.

In the end, everyone got 90 percent of what they wanted. Historic district supporters can continue working toward that goal without fear of more demolitions. Elrod can do what he wants with the property. The house will (hopefully) be saved. And residents planning renovations can move forward.

The West Hancock moratorium went far more smoothly. Of about a dozen speakers, everyone supported it, except for representatives of Ebenezer Baptist Church and The Varsity. Ebenezer asked for an exemption for its annex, which church members want to demolish, but commissioners refused on the grounds that it may be historically valuable and restorable.

The Varsity is assembling surrounding properties for what neighbors suspect will be a development encompassing an entire block at the corner of Milledge Avenue and Broad Street. (Say goodbye to those big magnolias.) Among them are several historic houses, including one possibly antebellum home that once belonged to slaves-turned-wealthy-dentists James and Charlotte Mack and educator Annie Burney, former principal of Athens High and Industrial, later Burney-Harris, the city’s black high school pre-integration.

“This is an architecturally significant house with historic significance because of the people who lived there and what they did for the community,” said Adam Hebbard, president of the Athens-Clarke Heritage Foundation board of trustees.

Representatives for The Varsity argued that the homes are in poor shape and should be demolished, but restorative architect Scott Reed told commissioners he believes they can be saved and rehabbed.

The traditionally African-American neighborhood has declined, but in recent years young, white families have moved in and started fixing up vacant houses in what is one of the last affordable, walkable intown Athens neighborhoods. And young African Americans are returning, as well. Donna Thurmond, whose husband grew up on West Hancock, said one of her sons has moved into the neighborhood, and another wants to buy and restore his father’s childhood home. Both white and black speakers said they value the neighborhood’s diversity, and expressed fear that investors and developers could disrupt it.

“We know what’s coming,” West Hancock homeowner (and one-time mayoral candidate) Andy Rusk said. “It’s going to be student apartments, or it’s going to be a strip-mall shopping center.” He drew a chuckle when he alluded to the plot of the original Robocop, in which a greedy corporation wants to exploit Detroit’s problems to build a mega-development for the rich.

John Brown, vice president of The Varsity, denied rumors that the landmark fast-food restaurant is leaving Athens or plans to build on the property anytime soon. “Let me be clear: We have no development plans,” Brown said.

But commissioners said The Varsity forced their hand by blindsiding them when the company applied for demolition permits after promising not to. “We tried to talk to the Gordy family [which owns The Varsity chain] for months, because we didn’t want it to get to this point,” Commissioner Jerry NeSmith said.

The Gordys could still redevelop the portion of the block fronting Milledge and Broad, which is zoned commercial-general. The moratorium only applies to residential properties. It passed 9–1, with Bell the lone holdout. Since Commissioner Melissa Link’s hold on The Varsity’s demolition permits is still in effect, the Reese Street houses can’t be torn down, unlike 398 Milledge Circle.

What’s ahead? Lots of meetings to decide how the neighborhood can grow while retaining its character. A historic district is unlikely for West Hancock, but a zoning change from multifamily to single-family or a zoning overlay district are possibilities, said NeSmith and Link, who represents the neighborhood and has been pushing for protections for two years. “It’s just hitting the pause button and giving us the kick in the butt to preserve this extremely important neighborhood,” she said.

The Gordys’ attorney, Mike Morris, was right about one thing, though: “Moratoriums are an admission that the system has failed, and you need to call a timeout.” With an update of ACC’s 10-year comprehensive plan rolling around soon, that’s something to think about.