Need-Based Scholarships Are Much Needed at UGA 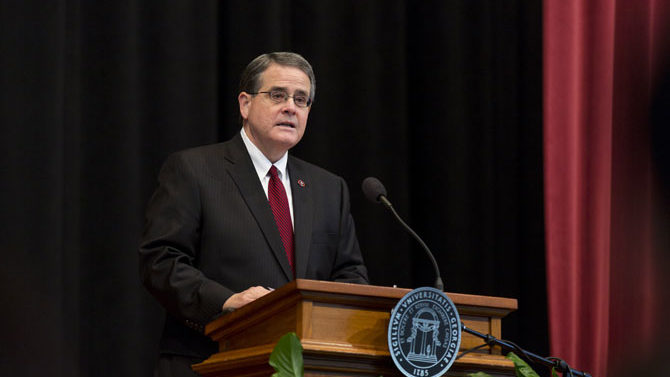 University of Georgia President Jere Morehead’s new need-based scholarship program, announced at his State of University address last week, is a welcome announcement, given the alarming level of inequality in access to higher education in Georgia. Last year, he introduced scholarships for students who are the first in their families to attend college, and Morehead himself was the first in his family to get a higher education. Clearly, he gets it.

Are poor and middle-class children really dumber than wealthy ones? Of course not. But  affluent suburban school districts are not only better-funded than their rural and inner-city counterparts; they have the luxury of not dealing with all of the challenges often associated with educating children from lower-income families—hunger, behavioral and mental-health issues, lack of parental involvement, lack of access to technology. Children from the bottom rungs of the economic ladder tend to start out behind their richer peers.

When it was enacted in 1993, the HOPE Scholarship was need-based. Flush with more lottery cash than they expected, state lawmakers quickly abandoned the income cap.

Flash-forward to 2011, when recession-driven budget cuts and accompanying tuition hikes meant lottery funds started to run dry. Rather than bring back the income cap, Gov. Nathan Deal and Republicans in the legislature decoupled HOPE from tuition. Today, for most recipients, it does not pay for books or fees and only covers about 70 percent of tuition, creating a further barrier for students who lack means. But it remains a subsidy on luxury apartments and expensive cars for parents who could easily afford to pay to send their children to UGA.