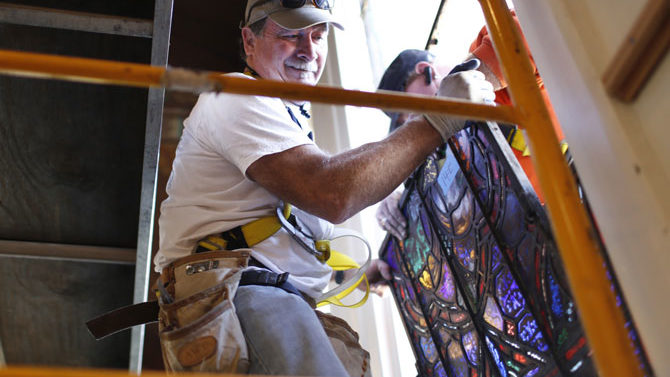 For years, many Athens residents have complained about the difficulty of walking and biking due to fast traffic and lack of infrastructure like sidewalks and bike lanes. But change is coming, Athens-Clarke County transportation officials promised at a Federation of Neighborhoods forum last week.

A committee is currently revising ACC’s bike and pedestrian master plan for the first time in more than 15 years. “That is a major step,” ACC traffic engineer Steve Decker said. “The sidewalk plan is a disaster. The bike plan is archaic. This is a new century, and we need to get in the right century.”

The Transportation and Public Works Department recently revised the formula for prioritizing new sidewalks, but that’s only a stopgap measure until the aforementioned committee completes its work. At the same time, recommendations from a recently finished transit study will be coming forward this fall, Athens Transit Director Butch McDuffie said.

ACC has a plethora of transportation plans. Besides those for sidewalks, bike facilities and transit, there’s MACORTS, a three-county agency that assists the Georgia Department of Transportation on local state-funded road projects.

Those plans all need to be combined into one master plan showing how they interconnect, panelists agreed. “There has been kind of a silo problem with transportation,” said Alice Kinman, who pushed for a Complete Streets policy as a county commissioner and now chairs the planning commission and a committee that’s recommending projects to fund with a 1 percent sales tax on the ballot in November. “It has improved, thanks to the efforts of people like Butch and Steve.”

In the past, transportation has been a tough topic politically because local elected officials have been caught between commuters who want to drive in and out of town quickly and intown residents who want to slow traffic down so they can walk and bike safely. But those values aren’t necessarily in conflict, according to Decker.

“Whenever you put a lot of automobiles in a place where there are a lot of pedestrians, you reduce safety, so we’re trying to get more efficient in moving traffic,” he said. “If I can move traffic, I make it safer for pedestrians.”

Decker cited “smart signals” being installed around the city and rapid flashing beacons at busy crosswalks, like those on Prince Avenue and Dougherty Street. The intersection at Lumpkin and Baxter streets—where thousands of University of Georgia students cross each day—now has a point in the cycle where pedestrians only are allowed to cross. “The pedestrian has no chance against a vehicle, so you get them out of the way,” Decker said.

“If you want to move people more efficiently, you put them on a bus or a bike in a bike lane or a [separated] bike path,” BikeAthens Executive Director Tyler Dewey said. “If you want to slow traffic down, you put [cyclists] in the middle of a lane where they can take the lane and should do so, legally.”

Dewey is serving on the bike/ped master plan committee. “I think it’s going to be very transformative, but we have to find a way to pay for those projects that come out,” he said.

T-SPLOST—projected to raise more than $100 million over five years for transportation—would be a big help. But the state law authorizing local governments to raise sales taxes for transportation has been interpreted to say that the money can’t be spent on operating costs. ACC could use it to buy buses, but not to pay drivers.

ACC could devote more general-fund (read: property tax) revenue to transit, McDuffie said. The local government could lobby the state legislature to allow ACC to spend sales tax on operations, which MARTA does but no other system in the state is allowed to do. Cities in other states tack a surcharge onto water bills or car-tag fees to fund transit. “Those are policy decisions that have to be made above the level of staff,” McDuffie said.

Athens Transit goes after grants “aggressively,” McDuffie said. T-SPLOST’s five-year sunset is unhelpful in that regard, because the feds want locals to have a 20-year funding source to match federal grants, he said. And federal funding for passenger rail mostly goes to big cities.

“The state’s pulling in a lot of money” from a gas-tax overhaul in 2014, “and honestly, most of it’s going to roads,” McDuffie said. Georgia funded transit for the first time last year, when Gov. Nathan Deal doled out $75 million in grants. (Athens Transit won $6 million to buy hybrid buses, which are on order, but the manufacturer has a backlog, McDuffie said.)

Decker described ACC’s relationship with GDOT as much improved, though. The state agency recently gave the local government $300,000 worth of fiber, is synchronizing lights on Atlanta Highway for the first time and is more willing than ever to install sidewalks on state highways, he said.

“I think we’re in a new era in Athens-Clarke County,” Decker said. “It should have started five years ago, but we’re getting there. We’re headed in the right direction.”

In an update on the city’s public art master plan, commissioned by the Athens Cultural Affairs Commission, Bressi endorsed the downtown master plan’s “art walk” of temporary installations from the Lyndon House down Jackson Street. He also proposed a permanent “urban cultural trail,” primarily in the downtown area, modeled on one in Asheville, NC, as well as pumping more money into ACC’s artist-designed bus shelter program, which he described as “hugely popular” and nationally known.

Bressi couched his ideas in terms of tourism and economic development, noting that The New York Times named Greenville, SC one of 52 places to visit this year on the strength of its cuisine, riverwalk and public art. “You’ve got the food. You’re getting the trails,” he said. “You get the art, you’ll have a lot more than Greenville.”

Other recommendations include hiring paid staff for the ACAC (which would continue to be volunteer-led), expanding small grants to artists, assisting businesses that want to commission murals and requiring developers to meet with the ACAC to discuss public-art opportunities, although it would remain up to developers whether to include art in their developments.

Funding could come from ACC’s tax on hotel and motel rooms, as well as SPLOST, Bressi said.

A Reservoir by Any Other Name

Last year, environmental advocates successfully fought to have a potential new reservoir removed from ACC’s 20-year water and sewer plan, citing their inefficiency and the damage they can do to river ecosystems. Now, the reservoir is coming back—but in a very different form than the one commissioners earlier rejected.

Since the drought of 2007–2008, ACC’s water use has declined from about 20 million gallons per day to about 14, 28 percent less than a decade ago. That’s great, but it also means that, when the next severe drought hits, the go-to move of banning outdoor watering won’t make as big of a difference—only about a 13 percent reduction, which might not be enough, Water Conservation Coordinator Marilyn Hall said at the work session. A PUD analysis found a 50 percent chance that Athens’ emergency water supply, Bear Creek Reservoir in Jackson County, will be overtaxed at some point in the next 30 years. A year-long severe drought resulting in a water shortage could cost the Athens economy $244 million and 4,000 lost jobs, according to the PUD study.

“What would really help is a raw-water facility capable of meeting a 20 mgd demand, and don’t freak out when we talk about this,” Hall said.

The reservoir the Public Utilities Department is now proposing would hold “clean effluent” for “indirect potable reuse,” Hall said. Rather than releasing treated sewage back into rivers, sewage treatment plants could pump it into a new reservoir (location TBD). During droughts, this water could be pumped back to the drinking-water treatment plant or to local factories through an all-new set of “purple pipes” for reuse in industrial processes. Some communities, such as Gwinnett County, are already doing this, Hall said.

“This reuse can really help with our peak demand for drinking water when our rivers are lowest and demand is highest,” she said.