Headed Down the Athens West Corridor 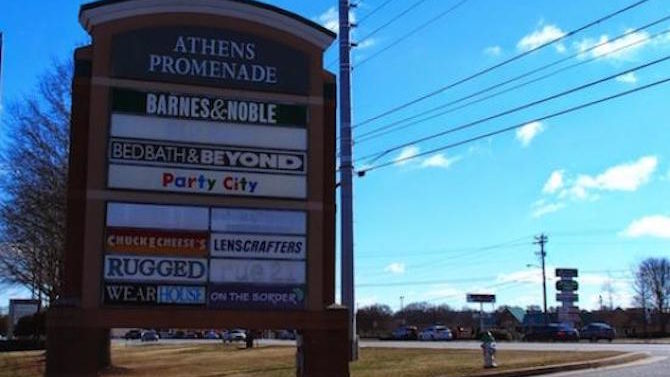 Atlanta Highway has long suffered from a lack of identity. The name is fitting in more ways than one—it resembles the generic, sprawling suburbs like Duluth and Snellville that Atlanta’s known for more than the charming, unique Classic City.

First of all, stop calling it Atlanta Highway, says Athens-Clarke County Commissioner Jerry NeSmith, who represents the area. It’s the Athens West Corridor. (Whether the B-52s will follow suit remains to be seen.) And the Athens West Corridor Committee—created in 2012 to revitalize the commercial strip—has come up with a number of ways to improve it, both from an infrastructure and branding perspective.

The idea that Atlant… um, Athens West Corridor is dying has been somewhat overstated. In spite of a few empty storefronts, Georgia Square Mall was bustling during my recent afternoon trip there for a recent committee meeting. Yes, some retailers have left for the new strip mall in Oconee County. But far more have stayed put, and most of the vacant big boxes left behind have already been filled.

If anything, the corridor is a victim of its own success. With about 40,000 cars per day traveling on Atlanta Highway, traffic is almost as bad as it is in its namesake city. Navigating between stores can be nearly impossible. (Good luck trying to turn left out of a parking lot.)

As the road’s owner, much of this is the state Department of Transportation’s responsibility. Committee member Stuart Cofer mentioned the bottleneck at the Loop.

“We’re waiting for GDOT to tell us what they’re going to do with it,” said NeSmith.

But there are things the local government can do to make the highway more navigable. For example, the committee is planning a couple of access roads that will make it easier to get from one store to another—one extending an existing road from Cleveland Road behind Toys “R” Us to Huntington Road and the mall, and another from the Racetrac to Musician’s Warehouse (which, NeSmith let it drop, is being converted into a microbrewery and brewpub called Akademia). Those roads could be funded by T-SPLOST, assuming voters approve the local 1 percent sales tax for transportation in November.

Pedestrians would benefit, too, from being able to walk more easily between stores on the access roads’ sidewalks. Local officials are also in talks with GDOT to use T-SPLOST to add more crosswalks and fill in sidewalk gaps on Atlanta Highway, as well as on Lexington Road, which is also part of U.S. Highway 78 and maintained by the state.

“I see people crossing Atlanta Highway every day, taking their lives into their own hands,” NeSmith said at the commission’s Dec. 20 agenda-setting meeting. The same goes for the Oconee/Oak/Lexington corridor, Commissioner Kelly Girtz added.

That’s actually at least $5.7 million worth of projects, and Commissioner Melissa Link questioned whether streets like The Plaza, which already has a sidewalk on one side, should be prioritized ahead of streets like Magnolia, where there is no sidewalk at all. (Other criteria include traffic volume, proximity to bus stops and schools, cost and evidence that pedestrians are already walking along the road, such as worn paths.) “I’d rather see resources go places where there are absolutely no sidewalks, and it’s scary,” Link said.

The commission may not have to make that hard choice. As Girtz noted, “with even a modest commitment from [the next] SPLOST or T-SPLOST, we could triple or quadruple what we’re doing.”

While discussing a recent audit of Leisure Services summer camps, NeSmith told the department to do a better job of publicizing ways that parents without internet access can sign up their kids. “I heard more compliments than complaints about online registration, but I did hear some complaints,” he said.

Food Trucks: A law passed earlier this year allowing food trucks to set up on Hancock Avenue outside City Hall on Thursdays didn’t exactly set the world on fire—only two trucks bought permits, and there are still only four food trucks in the whole city. The commission is poised to renew the law, though, and maybe since permits will be good for a full year this time, more food trucks will take advantage. Mike Hamby, the commission’s staunchest food-truck cheerleader, said he’s confident the scene will grow, especially as more private-property owners like Jittery Joe’s Roasting Co. host regular food-truck gatherings.