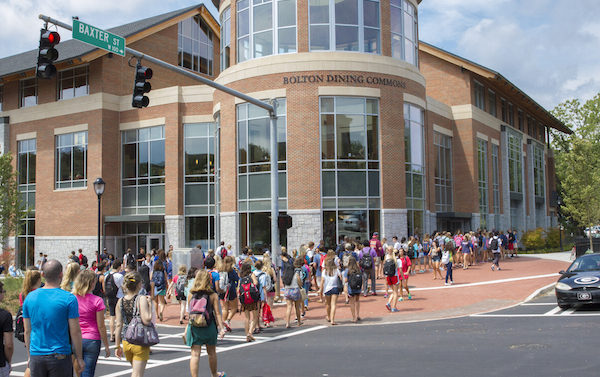 Voters in the Athens region rejected the first T-SPLOST (a proposed 1 percent sales tax for local transportation projects) back in 2012, as did all but three regions in Georgia. After that, state legislators went back to the drawing board, and have proposed rules for a new T-SPLOST referendum, this one to be put to voters county-by-county, which makes it simpler, but unlikely to address regional needs. Only rarely do legislators open new revenue streams to local governments.

Athens-Clarke County has funded many local projects (parks, trails, paving, bus stops, the library, the jail) with “regular” Special Purpose Local Option Sales Tax money, and the transportation SPLOST will work much the same way. Only transportation projects will be eligible, although that could include greenways, bikeshares, transit improvements or a “Whitehall/Milledge roundabout,” as one commissioner suggested at a Sept. 13 work session.

Any citizen, organization, commissioner or county department can propose a project for T-SPLOST funding. A citizens’ advisory committee appointed by the mayor (each elected commissioner will nominate two members) will vet all the proposals. Commissioners will vote on the final projects list, and that list will be approved or rejected by ACC voters no sooner than November 2017. If approved, a 1 percent sales tax will be collected within the county for five years, totaling an estimated $113 million. (Winterville and Bogart will share in the bounty along with Athens.) That would bring Athens’ sales tax up to 8 percent—4 percent for the state, 1 percent that goes into ACC’s general fund, 1 percent for SPLOST, 1 percent for the school district’s E-SPLOST and 1 percent for T-SPLOST.

ACC commissioners have been eyeing the T-SPLOST to fund projects like “corridor improvements” along Atlanta Highway or Prince Avenue, construction of new sidewalks and replacing very old underground pipes downtown. It could also to cover expensive items like road repaving normally funded through the general budget. “There could actually be a decrease in the general fund budget,” Commissioner Jerry NeSmith said optimistically at last week’s work session.

Commissioners could vote on a timeline next month, making project proposals due perhaps by January.

Bike Safety: A team led by ACC Traffic Engineer Steve Decker has compiled data on bicycle and pedestrian crashes and where they happen, and changes will be made to improve safety at those locations. The safety audit involved staff from police and transit as well as Transportation and Public Works; Decker has previously designed bike plans for Florida and New Mexico. ACC’s highest crash rates were along Lumpkin Street adjacent to UGA and Prince Avenue between Barber and Pulaski.

“Low-dollar projects”—typically improved markings, pedestrian refuge median islands and overhead flashing lights at crosswalks—will be done first. Lumpkin is Athens’ busiest pedestrian street, and the new refuge island adjacent to South Campus has been very effective, Decker told commissioners at the work session. Another is planned for North Avenue and possibly Prince. Once installed, projects will be evaluated based on crash rates.

Radar speed signs “are really worth the money,” Decker said—they do slow traffic. One is planned for Hawthorne Avenue (along with a new bus bay near Broad Street). But there aren’t many easy fixes for Hawthorne, Decker says. Power poles in the public right-of-way are a problem on Hawthorne and also Barnett Shoals Road, but it’s not easy to get Georgia Power to move them. “We’ve been fighting that battle for years,” said County Attorney Bill Berryman.

Despite public interest, a stoplight is “not warranted” at the planned 100 Prince development on the former St. Joseph property, based on traffic counts, Decker said.

A new mid-block crossing will be added near McDonald’s on Gaines School Road. Crosswalk improvements are planned at several intersections along Prince, on Baxter Street and on Oglethorpe Avenue at Forest Heights. Reflective paint is being added to red-brick crosswalks in order to increase nighttime visibility, and green paint will be added to some bike lanes.

But additional projects that come out of the revised bike and sidewalk master plans (see p. 9) “are bigger projects,” Decker told commissioners, and will have to be budgeted, perhaps through T-SPLOST.