ACC Is Updating Its Bike and Sidewalk Plans 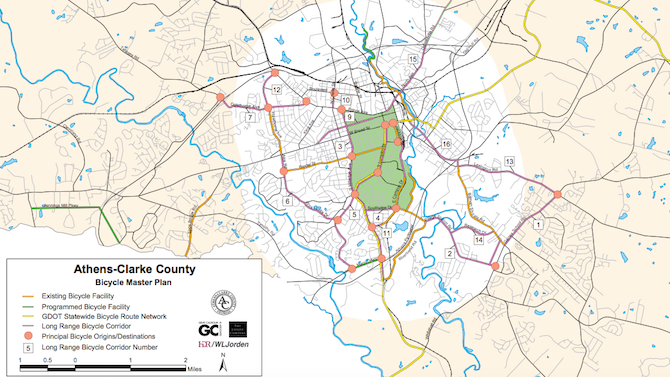 A new committee appointed by Mayor Nancy Denson that includes staffers representing Athens-Clarke County’s transit and transportation departments, BikeAthens Director Tyler Dewey and other citizens met Monday to begin considering specifics of both a revised Bicycle Master Plan and a Sidewalk Master Plan for the county. The existing Bicycle Master Plan designates a few major routes, but goes no farther; BikeAthens has called for it to be expanded and updated. Eventually, a consultant will be hired to produce the new plans based on recommendations of the committee.

At the same time, a “roadway safety audit” by several county departments produced a list of streets where the lack of sidewalks constitutes a safety issue, Traffic Engineer Steve Decker told the commission’s Legislative Review Committee last week. Topping the list are Oglethorpe Avenue, North Avenue and Atlanta Highway near Hawthorne Avenue. ACC has perhaps $3 million earmarked for building new sidewalks, but the easy ones to build have already been built, Decker said, and there may be “sticker shock” for some future projects. He wants to go ahead with some projects even before the Sidewalk Master Plan is completed. “We have a lot of people walking in the street, which is not safe,” he told committee members.

In some cases, construction standards could be modified to fit conditions, he said—a 4-foot sidewalk rather than a 5-foot one, for example, or a multi-use path (perhaps along Riverbend Road) rather than a sidewalk. Decker, who formerly designed bike infrastructure in both Florida and New Mexico, also said that in Albuquerque, every business must provide lockers and a shower for bicycling employees to use.

Also in the works: central control of all of Athens-Clarke’s 176 stoplights. Web-based software and, in some cases, cameras rather than underground sensors will permit coordination and reprogramming of all Athens stoplights from the Transportation and Public Works Department’s Lexington Road office. That could eventually ease game-day traffic, even eliminating the need for police at some intersections, as well as reduce daily traffic and stoplight waits, and will eliminate the need for technicians to adjust light cycles on-site. The upgrade is being funded by the state.