Athens May Be Getting an Anti-Discrimination Law, but Is It Strong Enough? 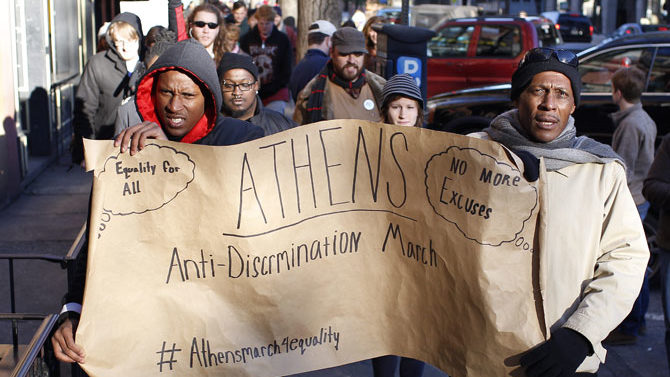 After a six-month wait for the county attorney to draft it, Athens-Clarke County commissioners are fast-tracking a local anti-discrimination ordinance—but local activists say the proposed law doesn’t go far enough.

Last fall, the UGA Student Government Association—prompted at least partly by a racist shot served at the Confederate-themed bar General Beauregard’s—collected dozens of complaints from minority students about discriminatory practices at student bars downtown. Black students said they’ve been denied entry to certain bars based on dress codes that aren’t applied to white patrons, and that they’ve been turned away because doormen told them the establishment was closed for a private party but allowed in others. Such practices are a “pretext to deny somebody admission based on race or other characteristics,” ACC Attorney Bill Berryman told the commission’s Government Operations Committee July 21.

The commission passed a resolution in January decrying such policies and instructing Berryman to draft an ordinance. He came up with two new regulations: One requires bars with a dress code to post the code at the door, and the other requires them to post a notice outside if the bar is being rented out for a private party.

Those who feel they’ve been discriminated against on the basis of age (unless they’re under 21), race, color, sexual orientation, gender identity, religion, national origin, disability or pregnancy can file a complaint with the county attorney’s office. After an administrative hearing, bars could have their alcohol license suspended or revoked and face a $1,000 fine.

The process would be a civil one because “enforcement in a criminal context is very, very difficult,” Berryman said, which is why federal civil-rights violations are generally handled by victims or the Department of Justice filing a civil lawsuit.

Complainants will be responsible for collecting their own evidence. They can talk to a police officer, but “they have immediate issues they need to deal with,” Berryman said. “They’re probably not going to be able to conduct any type of investigation.”

About 75 people attended the committee meeting—an unusually high number, especially given that public comment wasn’t taken. Many of them left with mixed feelings about the ordinance.

Mokah Jasmine Johnson, who organized a massive MLK Day march against discrimination at downtown businesses, said she’s still digesting the language, but she thinks the ordinance doesn’t go far enough because it focuses on student bars and not the whole community.

“I don’t think it’s going to be good enough to protect us,” she said. “It’s not just happening downtown. I think it’s a good start, but there’s still more work to be done.”

Johnson and Athens for Everyone’s Tim Denson both said they support a human relations council, a citizens’ board similar to one in Atlanta that can mediate between businesses and customers who file discrimination complaints.

But Berryman contends that there’s not much ACC can do about discrimination outside of bars and taxis, which are regulated by the local government. What are popularly known as business licenses are actually merely tax forms, so ACC can’t use them to sanction most other types of businesses the way it can use alcohol licenses, he said. In addition, Berryman said he narrowly tailored the language to withstand a legal challenge.

After some discussion about the signs’ wording and placement, the GOC unanimously passed the ordinance on to the full commission, which is scheduled to discuss it Aug. 16 and vote Sept. 6. The X-factor, though, will be bar owners. A couple showed up to oppose the resolution passed in January, saying they were being unfairly singled out, and it remains to be seen whether they’ll oppose the anti-discrimination ordinance.