The Campaign Against a State School Takeover Begins 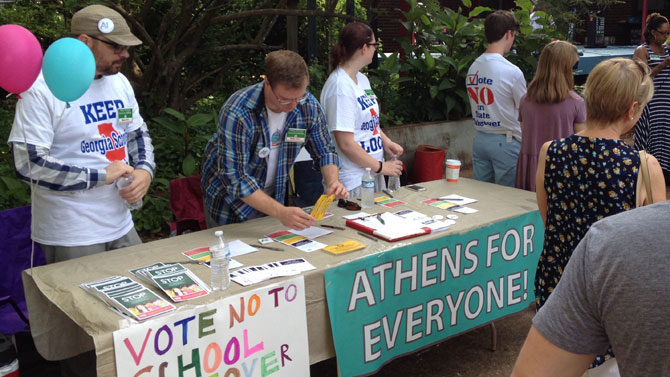 “This school’s climate of engagement and hard work is a model of excellence that we should want for all of our schools,” State School Superintendent Richard Woods wrote about Gaines Elementary School after touring it and Cedar Shoals High School last year.

The numbers say otherwise. On the College and Career Readiness Performance Index—a state formula that measures schools on student achievement and progress—Gaines scored less than 60 three years in a row. That makes it one of more than 100 Georgia schools the state labels “persistently failing,” meaning it could be taken over by the state if voters approve the “Opportunity School District” constitutional amendment this November.

“I can promise you that any individual who had spent some time in these schools would have walked away labeling these schools as model schools with CCRPI scores in the 80s or 90s and would be shocked to learn that they are in the 50s,” Woods wrote after his visit.

Test scores aren’t everything, as Clarke County School District Superintendent Philip Lanoue, an opponent of the Opportunity School District, notes every chance he gets. As Kevin Mobley, a recent Clarke Central High School graduate and former editor of the school paper, put it: “We’re not just statistics. We’re unique people with aspirations and challenges.”

Mobley was one of a half-dozen speakers at a “Keep Athens Schools Local” rally July 9 at the West Broad Farmers Market, organized by Athens for Everyone and the Georgia Association of Educators. The rally was a kickoff for local efforts to defeat the amendment.

Several of the speakers referenced Woods’ comments in their remarks. Janet Martin talked about the Osher Lifelong Learning Institute’s “buddy” program at Gaines, where volunteer retirees eat breakfast with students and tutor them in math and English. Nakia Payne spoke about her three children’s success at Gaines; one of them made straight As at Hilsman Middle School last year, she said.

“We are not a school of failure,” Payne said defiantly. “Keep out of Gaines Elementary School, because we will succeed.”

Opponents know they’re fighting uphill. Like the charter-school amendment voters approved in 2012, the Opportunity School District ballot language is worded in such a way that no one who didn’t know better would vote against it. And it’s backed by the state’s Republican leadership.

At least one local Republican, though, isn’t having it. Dan Delamater is co-chairing the Keep Athens Schools Local effort with Bertis Downs, a Democrat. Delamater said the Opportunity School District violates the conservative principle of local control, and it’s more about power and money than improving schools. (Critics have raised the possibility that Gov. Nathan Deal could turn schools over to a for-profit company to run.)

“This isn’t liberals against the governor,” Delamater said. “This is a bipartisan effort of people who are opposed to it for a variety of reasons.”

Athens voters opposed the charter-school amendment by a two-to-one margin, but it still passed comfortably statewide. The Opportunity School District amendment may follow the same path. Delamater and Ovita Thornton, a Clarke County school board member, both emphasized the need to campaign outside of Athens.

“Athens is a very engaged community on issues like this, but our neighboring counties need this type of information,” Thornton said.

Ch-ch-ch-changes: Dawn Meyers, the Clarke County School District’s director of social work since 2010, will move into the newly created position of executive director for policy and school support services, where she will be in charge of implementing board policy, non-traditional education programs, student disciplinary hearings and resolving parent concerns. Longtime administrator Ernest Hardaway has been serving in this role part-time, but Meyers’ position will be full-time.

At Cedar Shoals High School—where Derrick Maxwell was serving as interim principal after Tony Price was placed on leave and subsequently not brought back after the January sexual assault there—the new principal is DeAnne Varitek, who was an assistant principal at Central Gwinnett High School. Maxwell is returning to Whit Davis Elementary.

At Clarke Central, Robbie Hooker, the 2013 Georgia principal of the year, has taken an administrative job in Henry County. Selena Blankenship, the principal at Hilsman Middle, left for Jackson County.

The revolving door keeps churning at City Hall, too. Blaine Williams, who was promoted to county manager earlier this year, hired Atlanta native Jestin Johnson, the city manager of Bisbee, AZ, as assistant manager for Athens-Clarke County. He started Monday.

“I really had tears in my eyes when I saw the crowd,” said Commissioner Diane Bell. “It was so wonderful to see the different blends of people with their children.”

But the ADDA’s difficulties securing a permit for the event prompted Denson to assign a review of the county’s special-event permitting process to the commission’s Government Operations Committee.

We Get It, You’re British: Commissioner Andy Herod gave us all a reminder of his heritage at the July 5 meeting when he repeatedly pressed county attorney Bill Berryman on whether a newly passed law allowing brewpubs to sell growlers to go covers hard cider in addition to beer. (It does, probably, although Copper Creek doesn’t make cider.)

Later, Commissioner Mike Hamby razzed Herod, who’s been on vacation in the UK: “I really thought he’d be part of the Brexit vote. My hopes were dashed when I saw him here tonight.”